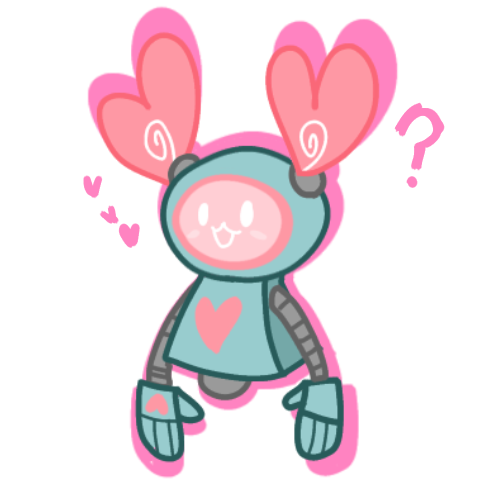 “Love conquers all, and if you're not willing to love, well, give me just a moment pal! We'll get that sorted out!” — Cupid

Likes: Love, People in love, People seeking love, Romance, Drama, People holding hands and gazing into each other's eyes
Dislikes: Hate, Singles who don't want to date
Attack Method: Cupid tends to run away from attackers if they cannot be reasoned with. Will attempt to cause inner conflicts if captured.

The common Cupid ship is just called "The Cupid."

Cupid is a small robot ranging from a tiny one feet tall, to a still rather small four feet tall. Cupids come in all sorts of pastel and soft colors, and are rather soothing to look at. Their heads are made of a shape, most commonly a circle, and they have a screen that covers a side of this face, normally displaying what can be called a rather adorable face. Most Cupids are constantly blushing. A Cupid's head also has two ears on it. These ears are normally symbols like hearts or wings, but some ears can be styled like animal ears as well.

The body of a Cupid is a rather plain and flat colored shape with a symbol on them, almost always a type of heart. Few Cupids have legs and feet, most of them instead having a small thruster at the bottom that keeps them constantly afloat.

The most memorable part of a Cupid unit are their oversized hands or paws, which have a symbol on the palm. These hands have been declared "great for hugs" and are warm to the touch, in fact Cupid units in general are considered a delightful temperature, perfect for holding.

Cupids are absolutely excited about everyone and everything they meet. Constantly jumpy they toss themselves into the arms of the nearest person so that they can hold the Cupid. Cupid units actually have an ulterior motive for this, as keeping themselves floating takes up too much of their power, so getting people to hold them saves them from possibly passing out due to losing power.

Cupids utterly ingrain themselves in the lives of the people around them, listening and responding to everything a person says, it isn't likely that anyone will be getting the last word with a Cupid around. Cupid units attempt to spread a positive vibe no matter what is happening unless the Cupid themself is under attack. Cupids can commonly seen employed in places where the owner either wishes for their guests to get a rather warm welcome, or areas where people need a pick me up. As such Cupids can be found in hospitals, constantly cheering people on to fight off their illnesses.

When not cheering people on Cupids are constantly on the lookout for matching people up with other people and things, but they're rather impatient and aren't very good at matchmaking unlike their counterpart, Eros units. Cupid units will see another person and their minds will click, registering that it could be a possible match. Instead of trying to figure out if this person is actually a good match the Cupid will tell the person they're with that they should get married, have kids with, or kiss this random person. They can be rather pushy about their want to see these people in a relationship but will commonly drop it with an "awwwww" if bluntly told to stop.

Still, the cupid may mention it later on.

A Cupid would never recommend that a person go kiss someone random if they're already happily in a relationship that has no need for more people in it. In fact Cupids toss a fit if they see any form of cheating or dishonesty in a relationship. A sad Cupid in a household is clear indication that there is much drama under the surface of the household relations.

Cupid units cannot exist without people, the moment a Cupid is alone they start becoming nervous or begin to talk to themselves to stave off the oncoming loneliness, as such it's best to turn off any Cupids before leaving the area for hours. If one doesn't they may find a house in disarray due to a panicked Cupid, who will then greet them excitedly like nothing is wrong, that is if they're not powered off due to using all their energy.

Cupid units are most commonly used for personal affairs. Some keep a Cupid as a therapeutic companion for their day to day life, while some keep a Cupid at home to act as their permanent child to avoid empty nester syndrome. While Cupid loves everyone they meet, commonly there is just one or two people they closely bond with.

When not brought for personal usage Cupid units can be found as greeters in stores, in schools for young children, performing at shows for kids, and in hospitals. Cupids are enjoyed by many for their work as a therapeutic tool. While admittedly very hyper and excitable, Cupids will listen, cheer on, and give emotional support to people.

Cupids are very understanding of when people are angry because of emotional issues, and when they're honestly angry at the Cupid itself, as such lashing out at the Cupid due to emotional issues rarely has any ill effect. Cupid will stay by the person's side and calm them down. A Cupid unit may even be brought in to help a shy child learn to deal with one who is more excitable than them in an environment where said metal "child" can be removed without offense.

Highly sensitive to other people's emotions, a Cupid can help a person who is having a hard time expressing themselves explain what they're feeling and why. This high emotional sensitivity causes people to temporarily bring a Cupid into the household to "absorb" the emotions of the household and give a general report on things. In a way, Cupids are great at helping people start the process in realizing their issues.

Outside of household usage Cupids can be seen on ships where they are considered pets or mascots for the ship more than crew members.

Eros: Cupid considers Eros like his big brother, Eros sees Cupid as an annoying little brother, so the feeling is unfortunately for Eros, mutual.

Venus: Cupid loves hanging around Venus, and Venus thinks Cupid is super cute and allows this. Cupid normally refers to Venus like the mother he never had, while Venus refers to Cupid as a totally cute talking accessory that goes with just about anything. Sure the constant yelling can be annoying but she'll do anything for style.

Hermes: Cupid tends to invite himself to shipping parties, which either leads Hermes to have to kick him out of the parties or "remove the fun stuff." While Cupid tries hard to make cool ships that everyone will love he tends to fail and just ship the first two people who he sees and thinks look cute. Which is, everyone.

Cupid is one of the many gods of love, and thus helps manage the affection levels between characters. Cupid mainly manages the initial relationship levels of characters. Commonly this number starts out fairly neutral, but sometimes Cupid will declare a love at first sight, or on the flip side, enemy at first sight. Without Cupid the initial relationship levels for characters could become out of whack, with everyone starting out as either long lost lovers or enemies from a past life.

As patron Cupid allows the player the power to use his bow and arrows. Every two planets the player gets two arrows. The first shot will always hit its target, but the second shot only has a 50% chance of hitting its mark. If it fails it will instead hit someone else at random. The two or more people who are hit by the arrows at the same time will fall deeply in love, or hate, if that is what the player wanted.

If they are in love they will be guaranteed to have children if they live till the end of the game and it is possible for them to have children. If they are shot by arrows of hate though, the two will likely fight each other to the death the moment they lock eyes again.

Godheads of Cupid are constantly a nice and toasty warm. They emit a feeling of kindness around them and make friends feel safer, and enemies less likely to attack. Cupid godheads do nothing but make others feel better, and there's truly nothing else anyone could ask for.

Cupid godheads appear to look slightly like teddy bear versions of their original species, coming in pastel colors and notably looking softer than normal, even if they are not. This may give some an uneasy effect of making them believe the godhead is a clockwork, but to most people they will find them just adorable.

• While Cupid units enjoy shipping others, being designed off of children they find romances related to them "icky" and state that relationships are totally gross.

• When three or more Cupids are in the same spot one Cupid will marry the other Cupids. These Cupids will then pretend the other Cupid is their child, before all the Cupids decide they're bored of playing house, and proceed to play "get divorced" with the one Cupid as the judge, in a surprisingly realistic simulation of a relationship gone sour. Whoever gets the most out of the divorce is considered the winner of the game.

• Cupid units love giving kisses where they touch their screens against people's cheeks. This is nowhere near as comfortable as their hugs. Not even slightly. 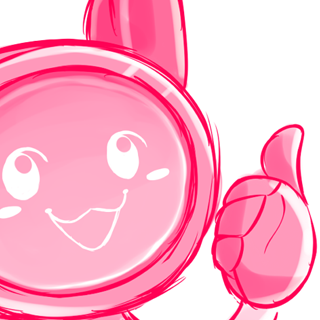 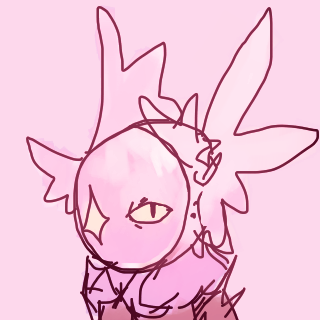