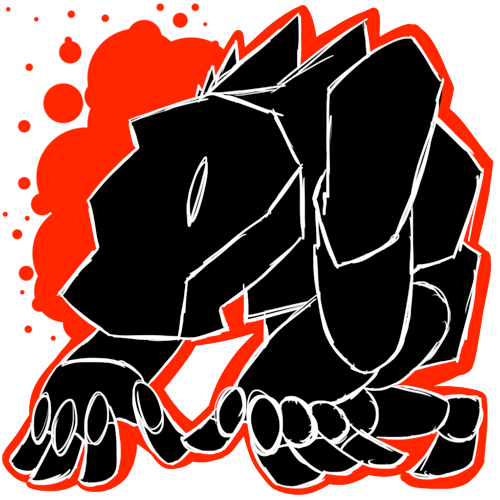 “I can't get in, boss. They put one of them rockfellas out front and he ain't budging no matter how I hard I hit em.” — A mobster trying to get past a khraast

Attack Method: Tough out the opponent's attacks and fight back with heavy weaponry.

Khraast do not seem to honor any certain god.

The khraast are large creatures that physically resemble an amalgamation of rocks. A newly discovered species, they are a biological anomaly; their rocky outsides appear to be a highly evolved chitinous substance, built to survive the blasting sandstorms of their homeworld just as much as any physical attackers.

Khraast move slowly, with a diet of what vegetation can be found during their slow crawl across the desert. When standing, they have a bulky humanoid shape, but while sitting down they are closer in appearance to boulders. After being lifted to the space age, khraast often found occupations in guard duty for their inherent ability to easily stand in one place for hours, as well as their sheer immovability when do so.

Socially, the khraast are very solitary creatures, and never developed vocal cords, instead crafting a diverse and complex written language. While they cannot speak, they have begun to adapt to the written language of the galaxy.

Khraast are not known to die of old age; rather, their rocky chitin slowly becomes eroded away over centuries, until it becomes thin enough that it no longer offers any protection at all, leading to the death of the khraast by other means.

It should be noted that khraast as a species do have one major weakness, due to their solitary nature they have quite weak immune systems- they avoid close proximity to others, which has not allowed their immune systems to develop properly.

"Shine" is a pseudo-hero to the kraast. It is not a single entity, but rather an incredibly rare state of being. According to legend, there is sometimes born a kraast child with brilliant diamonds adorning it instead of rocks; these children are viewed as almost divine entities, said to be untarnished by the desert winds, and believed to possess superior intelligence, leaving their knowledge written on cave walls for others to find later.

• Some khraast amuse themselves by playing boardgames like Chess or Go with other khraast via letters and more recently via email. Because they tend to be slow to write back, a single game might last several years.

• The written language of the khraast, in its complexity, allows for over a million rock puns. This has sparked great interest in their literature among the husses, even though there aren't actually a lot of puns in their books. A good number of husses have taken up writing in the kraast's language, providing a cultural exchange between the two races.

-Back to Species Menu-
< Kheiron
Kitlin >