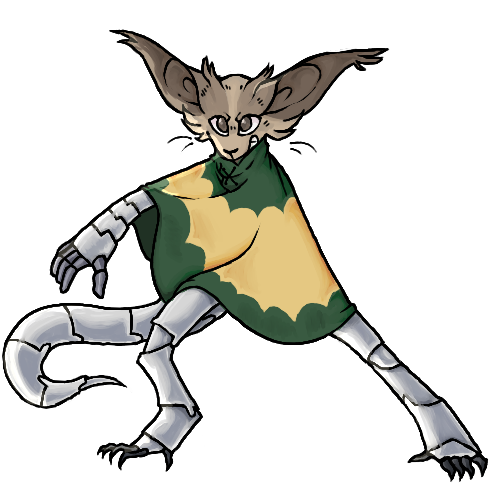 “I'll whip ya' up some new legs real quick-- what kind of metal can you afford?” — A kitlin limbsmith

Attack Method: Varies, depending on the modifications chosen. Slashing is often seen.

Many of the younger kitlins do not believe in any gods, however, some aging kitlins can be seen praying to their own gods.

Kitlins are bipedal mammals, with thin limbs. They have small clawed paws with pads that protect them from rough surfaces. Unfortunately these paws are essentially useless, with no opposable digits, for dexterity based application such as the handling of objects. They have a long snout with small, almost invisible whiskers poking out. The most notable feature, however, are their long, flat ears, which they use to pick out even the quietest sounds. They come in neutral tones, although orange and pale yellow can be seen on some as well, and along with this, they also have a bobbed tail.

Most kitlins modify their arms and legs to allow for greater range of usage and maneuverability. Because of the endless amount of customization possible, no kitlin will look the same, although most op for the standard amount of legs and arms: two and two.

Kitlins all share one dislike: the organic limbs that hinder their fighting ability. To combat this, a common right of passage is to get their weak arms and legs replaced with sturdier, more robust metal cybernetics. They range in quality, depending on how much money the kitlin has to spend.

Instead of wasting all the excess limbs and leaving them to rot, many kitlins see them as a delicacy, and will serve freshly cut off limbs to their relatives as a gift.

Kitlins live in small bands of five to six members, often family, who move from planet to planet trying to make money and get by, and can be found doing shady business to get enough money to afford new limbs.

Kitlins have a shared sense of culture and one notable example of this is their signature cloaks. The reason for these cloaks is to cover what many kitlins consider taboo, their torso. Although they love exchanging their organic limbs for metal prosthetics, they haven't figured out how to get their torsos replaced without ending up dead, so they use cloaks as a stand-in. One of the trials many young kitlins go through is sewing their first cloak, and is celebrated in some small hunting circles.

Personality-wise, kitlins are seen as cold and uncaring, but within their own groups, they can be incredibly friendly, and they love to gather and discuss the adventures they've been on. Older kitlins distrust other species, but younger ones are sociable and are eager to hear the stories of others, much to their guardians dismay.

No one is sure where kitlin's home planet is, or was. It is speculated that they are a more recent species, and this is because they happened to appear among some of the more rural planets and picked up work where they could.

Older kitlins have spread rumors of "The Great Banishing", passing it down to the younger kitlins but whenever they're asked about it, they get angry and refuse to say anymore. When younger kitlins are asked, they either don't know anything or just murmur, as if they're speaking of something shameful.

Long-tailed kitlins: While similar in appearance to their bobbed tail counterparts, due to the genetic mutation causing a long tail, these kitlins also often have higher fatality rates during limb replacement. It is unknown why long tails are more likely to die during surgery, however, many kitllin surgeons who specialize in modifications will flat out refuse to operate on long tailed kitlins. Due to this, they often just never go on with getting modifications, leaving them shunned by older kitlins. Another way to differentiate them from bobbed tails is the fact that their snouts are shorter and whiskers longer.

Modifications: Kitlins love to customize their limbs, from something as simple as gloves with opposable thumbs, to wheels instead of feet to move faster. They even change out their robotic limbs just to fit their mood if they can afford it.

• Kitlins enjoy gambling as a pastime, and love trying to swindle opponents out of as much money as they can to afford the latest mod.

• A place to find them include black markets, with kitlins snooping around, trying to pick up work that no one wants to do, or even selling limbs they just had removed.

• Older kitlins claim their cloaks show the planet that the kitlin's originally hailed from, and that they have been passed down generations down, but this has never been proven true.