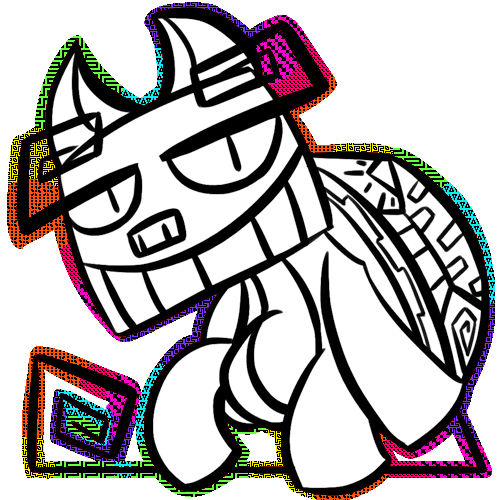 “I think I hit my head upon landing.” — Madero Scadero, on meeting the soledad living on asteroid Bel-Topp

Common Jobs: Anything where they can work by themself.
Likes: Solitude
Dislikes: Being seen

Unreliable information on what gods they worship, if any.

Soledades have a head with aspects of a pig, nose, ears, general shape of cranium, and a whale, mainly in the mouth area. The most prominent feature on their heads are their long eyebrows, which jut out wildly from the face and bend at sharp angles, mazelike. The eyebrows may not be entirely real at all times.

Their rounded rectangular limbs lack traditional skeletal joints, instead containing numerous cartilaginous fulcrum points that allow them the flexibility of a gumby figure. From the ends of their limbs, they may temporarily form multiple fingers with amble dexterity.

The ventral area is whalelike, continuing from the lower jaw. It is calloused with rough, protective folds of cartillege that slope up into carapacian plates around the side. This connects to bone for a tortoiselike shell. The shell is inset with minerals and gemstones, as well as complex, intricately-carved patterns. The three most common stones one will find a soledad's shell covered in are natural pearl, turqoise, and obsidian.

While individual behavior varies widely, to the point of there being few agreed upon social norms, there is one trait that comes instinctively to soledades. They are a species that seeks solitude; to inhabit isolated places. Much as the term "a tourist" comes from the tourist, the word "solitude" comes from a translation of this species's name.

In addition to seeking geographical isolation, soledades also unknowingly impose a personal distance between themselves and others. This stems from each individual's irreproducability in both appearance and effects they have on things around them for simply being bringing about a strange kind of egoism over how special they are.

Their lifespan differs greatly based on metabolism, what health conditions a soledad is predisposed to, and whether or not that individual is symbolic for something in a way that they might spontaneously turn into a cloud or something.

They are filter feeders used to straining large amounts of both water and land for krill, insects, seaweed, plankton, mycobial colonies, and other small organisms through their baleen. They can subsist on prepared rations blended finely with water if needed.

There are many different pre-contact myths regarding different soledad communities and regions, but it is difficult to verify the historical accuracy of any of them, considering soledades' tendency to be unreliable narrators.

The story of soledades' first contact with the outside world, transcribed by historian Petel Juiry-jo, is listed in the special section.

Much as the didaskaloi had a crisis brought upon by the conflicting drives of isolationism versus expansionism, soledades had a crisis following first contact. Some wished to dig deeper to hide away into their world, spurning outside contact, while others saw advantages in embracing some parts of spacefaring culture and uniting enough to form a cultural and political basis for a great diaspora that carried a shared cultural identity beyond one's own isolated community.

The story of first contact: One day, when the moon was in the sky, a second moon descended upon a clearing near the village of No Flat. The cousin of the leader of the village, So-So Finneca, had been waiting in anticipation at the spot where the second moon was to land for fifteen cycles, feeling that something important would happen there. So-So was an odd Soledad, who wished to meet with the bodies of the heavens - which everyone knows are numerous and imposing upon the gentle darkness. All told So-So to give up on their waiting, that it was foolish, that it was not right, and no, it would never come. The moon would come, So-So said from their anticipated spot, and then it did! Unfortunately, So-So had anticipated the spot where the second moon would land too accurately, and was crushed to death beneath it.

As the second moon hollowed itself out, and inhabitants inside stepped foot on Real Yerba, So-So's spirit looked for a nearby object to inhabit. They decided upon a special rock that was dull in every way, much like the moon, as perhaps it would be able to better speak to the moon.

"Greetings, hollow moon! I have noticed you have crushed me to death."

The inhabitants of the moon looked around to see where the voices had come from.

"Oh," the lead explorer said. "You're a rock. This is one of those planets."

"I am only a rock for the time being. My former body is pressed beneath your moon."

"Well, that's too bad," the explorer said. "Will your death be an inconvenience to anyone?"

"I was waiting here because I had anticipated that something which would change the world would happen at this very spot. Every day, my cousin, Larger, the leader of the poor, decrepit and highly visible village of No Flat, comes here to check on me, and to offer that I come back. Now that the change has finally come, I was going to take the change back to No Flat to present to Larger, and vindicate myself over their doubtings. Unfortunately, my body is incapable of delivering the change in this current state. Once they see my body, they might be upset for a few ticks, that I was not only right, but that it will all be for naught! They'll soon get over it, and forget about me, but for a few ticks, they will be quite surly."

The explorer thought a bit.

"Hmmm... I think I could bring some change to your village in your stead. Which way is it?"

"Oh, thank you!" So-so exclaimed, and they pointed with a cloud of dust brushed up by the breeze. "It's over there."

And so, the explorer brought the change to No Flat, to be followed by many more hollow moons. No Flat was emptied out by this change, either by entering hollow moons of their own, or by retreating deeper into the nearby marsh flats where the darkness swallows families by the whole.

• Due to low base populations resulting in mutations being common, soledades can vary in appearance and behavior wildly; however, none of these variations have high enough population for distinct subspecies to emerge.