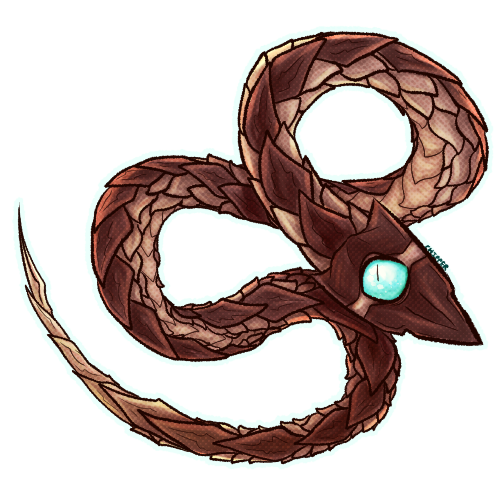 “These things were hard to kill, but we did it :-)” — Notail archeologist

Attack Method: Ambushing prey and biting their heads off.

They adored the Great Syroqe, the Old Father Desert, before being destroyed.

The frejynk were a species of desert reptile that used to live in the currently destroyed desert planet Arrakeron. They had no limbs to speak of, with a long, sinuous body covered with a thick layer of scales ending in a usually sharp tail. They had a sandy brown bone-like formation on their heads, similar to that of a skull, with a band on the front where a blue eye could be seen.

Their head also used to be slightly elongated, giving them a natural shovel, and yet another hole at the base, where a circular mouth full of sharp teeth was hidden by the skull. They used to be highly intelligent, but they had never left their tribal stage. They were quick learners, and most of attacks directed towards them failed if used a second time. It was said they also had psychic powers, being able to summon sandstorms but that's currently under debate.

Story of their extinction

The frejynk used to live in a planet with a scarcity of water, Arrakeron. Unfortunately, the planet had many special resources, which attracted the attention of the notail race. The notails had no mercy when the leaders of the snakes tried to use the diplomatic way, so they initiated a war.

The Desert war, as it would pass down in history, was a terrible conflict with one intense casualties without use of weapons of mass destruction. The frejynk had a resilient immune system which allowed them to survive the usual plagues the notails brought with them. They organized a guerrilla battle system, with multiple ambushes at points of interest, which brought the invader to the edge of their wits, as the tricks that had already been used against the natives were constantly backfiring, mostly due to frejynk sabotage. After a many years of war, the O-classes decided that Arrakeron wasn't worth having, and using a prototype nuclear bomb called Stone Burner, they shattered the planet to chunks.

The notails were quick to forget the issue, but during the war they hadn't noticed the groups of frejynks being smuggled away in their own ships, usually taking over them and eating the heads of the former masters of the vessels, and sailed away. The frejynk guerrilla against the most powerful race of the universe had been a constant thorn on the notail species for many decades, and their resistance to the continuous attacks aiming at their extinction were an inspiration source to all races under the masked rulers.

Sadly, the frejynks were slowly losing their endless battle for survival, as the notails perfected their tech and army when the snakes had nothing but stolen weapons and wit. They were finally exterminated near the area known as the Acrisius Cloud, where all the remaining frejynk were captured after heavy losses from both sides, including two O-classes, and finally exterminated.

But the mark they left was too much for the notails to erase their existence, for they had been one of the valorous species that after losing even their own planet, were restless in their fight for justice, and they left many myths and artifacts behind, including their cult to Syroqe, old Father Desert, on many desert colonies.

• The frejynk were more related to fish than to reptiles, and according to fossil records from the notail archive, they seemed to have evolved from ocean dwellers.

• Their strong immune systems are still a mystery today, and a few plague doctors are currently trying to unveil the mystery of their white blood cells, if they had any.

• Reports of the desert snakes many years after their extinction aren't that unheard of, but none of them can be confirmed. Some believe that a few frejynk may have attempted to save themselves via time travel.

-Back to Species Menu-
< Fog
Frescar >