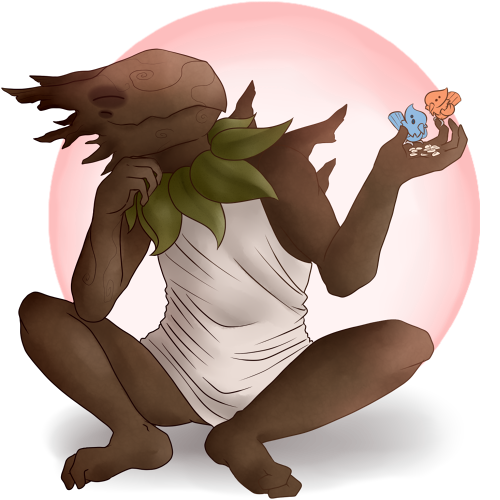 “When going through this forest, make sure to leave everything as you found it. The trees here have eyes to see everything you do. Hope they never open their mouths, because that could mean one of two things. One: they could be raising an alarm to bring the whole forest against you, in which case you may have only moments left to live. Two: something far worse. They have decided to tell you a funny joke.” — Field guide notes by Madero Scadero regarding the Waterberry Settlement in Toporus, Pei'sre

Attack Method: Concentrated, overwhelming long-range artillery barrages or rain-of-arrows, though this is much more common in defense of a settlement than in militant expansionism.

[Patient] Neutral trait
This character is willing to wait things out or is less affected by aggression. This character tends to be a tad more tolerant of others but not by much, even this character has their limit on what they'll be able to take.
[Green Thumb] Positive trait
This character is very skilled at growing all sorts of plants with little failure. Character also has a charisma and intelligence bonus when talking to, or about, plants / plant based species. Character commonly is a gardener, hobby or otherwise.
[Repetitive] Negative trait
A character with this trait is likely to repeat certain actions and/or phrases a ridiculous amount of times even if it's a bad time to do so.

Prunii are more in to their own personal gods then any Limbo god. This personal god has many names depending on who is being asked, but is typically called the Garden Keeper.

The prunus species are usually best described as "ambulatory tree people". They are roughly bipedal, with leaves and branches growing out of what is usually called their head. Prunii, as a species, tend to be around six to seven feet in height and frequently grow large manes of leaves or flowers around the crowns of their heads. Most prunii are some shade of brown in color with greenish leaves, however, variants of the species do exist; many red or orange-leaved individuals have been seen by other races, and even a few with long stringy vines instead of leaves and pale white "skin". Prunii as a society have very little need for clothing, but have adopted to wearing it upon encountering other species as a social courtesy.

The prunus species tend to be slower moving and lumbering, however they are also extraordinarily resilient. Their "skin" is effectively hardwood and they can, over the course of weeks, months, or even years, regenerate wounds. This regeneration can even regrow detached limbs. Prunii can eat as other species do, but due to their nature also possess the ability to slowly perform photosynthesis and absorb nutrients from soil. Due to resins and sap in their bodies they are rather flammable by nature. Prunii have a cultural imperative to expand their own territory and grow.

Prunii are naturally logistics-minded. Much of prunus culture is structured around the fact that the majority of a prunus's life is spent unable to move from one place, so if one can't go to where the party is, why not bring the party to you? The ability to quickly and efficiently send chatter and material long distances is what allows for sedentary prunii to exist in tight-woven societies despite of physical location, and without needing to be tended to by the ambulatory prunus population. For example, one settlement can aid another settlement in a time of drought, malnourishment, flood, or fire by delivering whatever's necessary from one settlement to another in a glorified bucket brigade. Plots between settlements are cultivated years for before some prunii eventually root at what becomes a relay post or a supply station.

The lifespan of a typical prunus passes in two stages. Their juvenile to young adult stage lasts for between 25 to 35 years, and it is during this time that the prunus is ambulatory. At some point after their 35th year or so, the prunus will enter its breeding adult stage. Entering adulthood causes it to firmly root itself in surrounding ground, grow more limbs and increase in size, and become sessile. Their adult stage of life can last anywhere from 100 to 150 years. If the conditions around them do not allow them to take proper root, a prunii will die during the process of entering breeding adulthood.

Rooting is looked forward to positively by almost all prunii, as the mechanism of rooting activates the production of a hormone that all but eliminates anxiety, an effect compounded by the elimination of the need to find food. Depending on the quality of soil rooted in, a Prunus's sedentary stage can be 100-150 years of bliss.

Soil quality is important, by the way. Soil with too high or too low of soil pH, contaminants, or a lack of nutrients, versus rich, healthy soil spells out a 50-to-100-year lifespan difference for a rooted Prunus. A difference in placement by even a few feet can translate to a shorter lifespan. This is why much time, thought, and measurement goes into combing over potential plots before rooting takes place. Prunii may enjoy telling stories, but they're much more compelled, evolutionary, to this process of "plotting."

Prunii can get a good feel for a spot of soil's properties, including nutritional value and composition, through taste and touch alone. Toxicity, too can be detected this way without much risk other than a temporary ache since there's no continued exposure, unless it's something unnaturally potent and deadly. Still, prunii have developed tools to get more exact soil readings. A prunus in your community may start repeatedly taking soil samples from a particular spot. This is a sign that they may be plotting something. Depending on whether or not you want an irrevocable relationship with ridiculous joke trees, you may wish to take action at such a point and shoo them away.

Prunii are vulnerable to close-range offenses in their sedentary stage, so they know too-aggressive expansion risks a devastating tit-for-tat down the line. Prunii are more likely to expand through a slow creep into territories of small or lenient communities/individuals of other species who may learn too late the result of having a prunus rooted in their community. That is, if you can't live symbiotically with one or more prunus that's taken root, it's nigh impossible to get rid of them without sparking a conflict with any prunii they're socially connected to.

As a species only recently encountered by other species, the history of the prunus are not very well known outside their own kind. They were first discovered by the space-faring community while in the process of attempting to colonize an already inhabited world, which did not do much to foster friendly relations with others.

• A settlement is the name for a group of prunii who have rooted near each other. 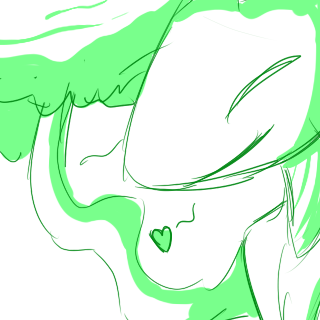 -Back to Species Menu-
< Protegrotten
Pud >