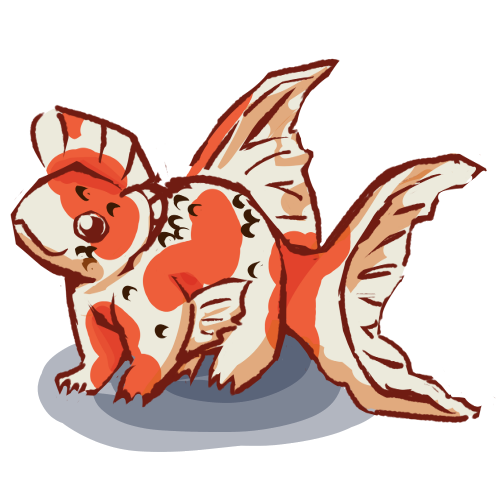 “They really just sit there and look pretty. It's a good starter pet if you ask me. They don't even do much!” — A pet store employee trying to sell a frish.

Attack Method: Frish will usually just resort to hiding or puffing up to make themselves look bigger. If attacked they simply would play dead, hop away or attempt to bite.

Frish are small aquatic creatures with a frog-like body with protruding fins on the head, front legs, and a fish-style tail. These fins are fairly fragile and help them swim along the water where they live. They have strong sturdy legs that are used to hop quickly to catch prey or run from predators easily. They will extend a vocal sac on the throat to appear larger when threatened. These creatures are also equipped with small claws to help attack but also make burrows for homes.

Frish are very social creatures around their kind. They are vocal, making croaks to attract others or warn of any predators around. While they don't mate for life, they will pair up with the same partner as last mating season if they can find them. They lay eggs in clutches in the water, and the male will stay around to make sure the young hatch. After hatching, they will fend for themselves and stay together for safety. Once fully grown, they will move into new areas and branch off themselves.

They are considered to be lazy, often lunging around and eating any prey that comes along. A domesticated frish is helpful for any pest infestations. Groups of the fauna will work together to kill one larger prey, though these events are rare.

Pet frish is not much unlike their wild counterparts staying true to their lazy nature. If given the proper space and food they become open to playing games and learning tricks from their owner. They will do better in a pair though they will be content if given lots of attention by their owner. They still keep the sudden and jarring movements when offered food, but it's harmless fun as they have no teeth. Mind their claws, though.

Frisrok: An uncommon subtype of the relaxed frish these creatures are far more dangerous. They are vibrant in colors, have spiny barbs running down the back, spiky fins, and live more in tropical areas around water. They are more standoffish, secret poison from their skin, and are toxic to most things that touch it. They will not live close to their kind as they are prone to fighting each other due to their hyper aggression.

• Frish becomes stressed when being handled for long periods. While they may like getting pet, please don't pick them up.

• A frish will eat anything that moves in front of it, as they're not very smart nor do they care.