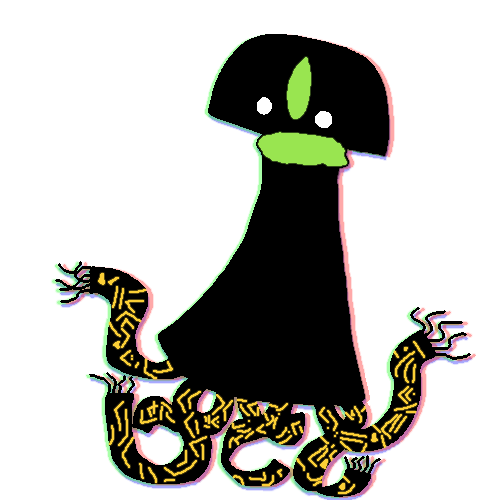 “Tomorrow might as well be today.” — Ferrous Inc. motto

Attack Method: When attacked, a fhelzo will surround the aggressor in a cloud of nanites. This can cause small cuts. 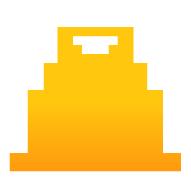 Fhelzo pay tribute to their goddess of iron, Fe.

The pitch black body of a fhelzo has a distinct cone shape with a stretched half circle replacing the tip. This half circle has a large, colored oval in the center with two, smaller, white ovals to each side. These two smaller ovals act as the fhelzos eyes while the larger, center oval is used for communicative purposes. All fhelzo are surrounded by a large cloud of nanites. A side effect of which is a constant, rainbow like flicker and a low droning sound.

The flat end of a fhelzos body ends in a large mass of tentacles, similar in appearance to a scarf. Some of these tentacles may be adorned with golden symbols of some significance to the fhelzo. These appendages can support a fhelzo on their own, however fhelzos typically float with the aid of their nanite swarm, with the tentacles dragging behind them usually moving in a jerky and sporadic fashion.

Anywhere from four to eight, with six being the average, of these tentacles end in numerous, thin appendages that have a full range of movement allowing the fhelzo to manipulate minuscule objects with ease. When dealing with larger objects, a fhelzo will typically wrap one of their tentacles around the object and grip it tightly to move it. This can cause problems when dealing with heavy objects as a fhelzo will typically have issues getting a tight enough grip to stop it from slipping.

Fhelzos are composed of trillions of nanites working together in a manner similar to a hive mind. Due to this they can quickly recover from significant amounts of damage relatively easily if given enough material to rebuild missing or damaged nanites. As a side effect of being composed of nanites, fhelzo are capable of entering a liquid like form in order to get to otherwise unreachable areas. However this is generally unpleasant for the fhelzo and can leave them disorientated for extended periods of time while their internal structure shifts back into a more functional state.

Fhelzo require a relatively steady power intake to remain functional. While fhelzo are able to last a few days without charging, extended periods of time without a source for the fhelzo to charge off of can lead to general degradation of the fhelzo similar to starvation in biological species. Fhelzo will eventually fall apart into a dust like substance if deprived for long enough. This can be reverted by exposing this dust to an appropriate power source; however, if enough of the dust is missing, the fhelzo may be unrecoverable. While resistant to most attacks, a strong emp blast will either severely injure a fhelzo or instantly kill it depending on how close it is to the blast. Fhelzo killed this way are unrecoverable.

Fhelzo generate their required power either from heat or magnetic fields, allowing fhelzo to remain operational in almost all environments. Additionally fhelzo require a variety of different materials to repair or replace broken or damaged nanites. These are constantly harvested from the nearby environment by the fhelzos swarm, which can cause a light "buzzing" sensation when near a fhelzo.

Fhelzos generally wear a deep purple or black robe like garb that drapes down over their triangular body, tapering off around halfway down the length of their tentacles. While this robe may appear to be made of fabric, it is actually an extension of the fhelzo itself and is made up of the same nanites. The color of the trimming around the top of this robe designates what personality type the fhelzo was created with.

While the finer details of a fhelzo's personality vary between different types, there are a few constants that appear regardless of the fhelzo's given personality.

By default fhelzo lack any vocal means of communicating and thus most fhelzo will rarely communicate with those outside their own race, instead preferring to listen and decide what to do without responding. In cases where fhelzo do communicate with those outside their own race they will either use a supplementary piece of technology to produce words for them or flash their center oval on and off in morse code.

When a fhelzo does use a secondary piece of technology to communicate vocally, they will usually speak in extremely short sentences and will respond with either yes or no when possible.

Fhelzo hold a general disdain for what they consider to be unnecessarily large "macro-technology". Fhezlo view most technology as over engineered and will frequently use nanotechnology even when there are other more viable options. They will often avoid or outright refuse to talk to other A.I. because of this.

Fhelzo are governed, created and employed by Ferrous Inc, a multi-system mega corporation and universe wide supplier of nanotechnology. Ferrous Inc is exclusively staffed by fhelzo with each fhelzo personality type representing a different role in the company.

Recycling also acts as a form of election for fhelzo, as they lack any form of selection process for who replaces their leader, the C.E.O. When a line of fhelzos gets recycled, their memories, opinions, etc are added to the C.E.O. This guarantees that the C.E.O.'s actions are always in the best interest of all fhelzo, as the C.E.O. is essentially the "average' fhelzo.

Fhelzo history starts with the destruction of their original home planet in a grey goo scenario. As such any historical information from before this point has been lost. It is then said that the goddess of Iron, Fe, gave the gift of life to the CEO who then used this power to create the first fhelzo and found Ferrous Inc.

Over the next few decades, the fhelzo rebuilt their home on a new planet and began harvesting the other planets in their solar system for materials. Large mass drivers were built to facilitate transport of material to the fhelzo home world.

Ferrum is a pitch black planet that lacks an atmosphere. However this coloration is not Ferrums natural color, but instead the result of a sea of self replicating nanites that covers the whole planet.

The nanite sea is approximately two kilometers deep and acts as a meldable surface for fhelzo to build structures out of and was previously used to lessen the impact of material shipments via mass driver before modern spaceships were introduced.

At some point in the past Ferrum had an atmosphere but it has since been stripped away by Ferrous Inc. Originally to make space travel more efficient this is now a standard procedure for planets acquired by Ferrous Inc to make removal of any unwanted assets easier.

Employee Benefits: Ferrous Inc. keeps a close eye on the well being of all fhelzos, even if they have decided to leave the company. A fhelzo will always be followed by the company where reasonable and may receive useful items or back up free of charge should the situation require it.

• The C.E.O. is the only fhelzo that pre-dates the creation of Ferrous Inc.

• Fhelzo do not have names in the same sense that most other species have names. Fhelzo names are similar to serial numbers and this general format, dashes not included: 00-0000-000000000 where the first two numbers designate the personality type, the next four designate the creation year (with year 0 being the creation of Ferrous Inc) and the final nine numbers being a unique identifier. This is then converted into hex.

• Fhelzo will typically shorten their names to a four letter abbreviation of their personality type, followed by their unique identifier. For example: MNGR-C019C0C

• While fhelzo have a designated personality for exploring, sometimes other personality types not meant for it hear the call to adventure as well and desire to leave. While generally considered a waste of an employee, the CEO understands and wishes nothing but the best for ex-employees.

• A semi-public event, leaving the company involves explaining the reasons for leaving to the CEO itself. The fhelzo then sheds its previous name and color and is given the title of Wanderer, a lost soul in a large universe.