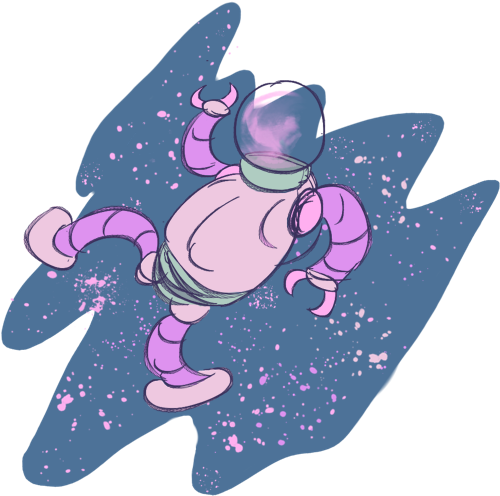 “But that night, our monitor became cloaked in a deep, murky shroud. We thought it was a hallucination precedin' the moment we finally keeled over from hunger... but just as suddenly as it had appeared, the strange mist had lifted, and before our very eyes lay, a planet! We set a course for it immediately, dizzy with joy. We thought what had happened was the work of the gods, but I discovered the true cause from a curious visitor I got that night...” — Excerpt from Captain Cojack's journal, on his encounter with the fog

Attack Method: Tries to avoid fights for the most part, if made to fight will use self-defense tools built into the fogborne.

[Individualism] Neutral trait
This character doesn't need others to function and doesn't lose morale or sanity on an empty ship. They are self sustainable but may be prone to staying away from groups.
[Observant] Positive trait
This character notices things far quicker than most other types of characters. They are more likely to make observations about hidden passageways or certain special objects. They overall make better judgements than others.
[Passive] Negative trait
Characters with this trait are unlikely to take initiative, and only do things when asked. They may prefer to stay away from action even in lieu of helping their team, and need to be specifically asked to do things that may seem like automatic or obvious responses to some.

Fog do not tend to honor anything, but if they do it tends to be the Creator.

A fog appears to be a sort of inter-spatial mist. Fogs consists of a massive cloud of microorganisms which keep themselves afloat and attached to each other. Fogs appears to survive solely on cosmic radiation. Sometimes a fog will issue out a part of itself to explore other areas. Why it does this is unknown, but when it does, it tends to "bottle" itself in a special machine called a fogborne for getting around.

Fogborne look like robots, but they have a transparent head and limbs that allow light to shine on the fogs inside. They appear to have an artificial antigravity inside, so the mist can twist itself into various shapes, allowing for some expression. The exact shape of the robot varies, some are humanoid, some are insectoid or spider-like, some are more animal, and some are based on older robot designs. It largely depends on the fogborne's purpose.

Fogs can be fickle, since it's a large mind-hive rather than a single organism. It is on the whole, mysterious, and its purpose in the grand order of things isn't known for certain. What is known is that fogs universally hates gravity. Its psionics cannot stay connected in gravity stronger than that of a moderate-sized asteroid, it will collapse into inert dust, but even smaller fields restrict its movement, which is apparently uncomfortable. Because of this, fogs cannot explore planets without the fogborne machines, which collect enough light and cancel enough gravity to make the conditions tolerable.

The fog as a whole is more or less immortal, and the microorganisms die if left separated from the others. The only known way to kill a large group of fog immediately is to introduce it into a strong field of gravity abruptly. Usually, this happens when a violent incident destroys a fogborne, exposing the fog inside to gravity. A single fogborne machine lasts anywhere from a year to a century, depending on how well it is maintained and the amount of erosion that occurs due to varying environmental conditions.

A fogborne generally shows more individualism than the main fog due to its unique circumstances, though their personalities are generally similar.

Usually, when the end is approaching, the fogborne will attempt to return into interstellar space, where it can later be picked up by other fogs, presumably assimilating the things it has learned in the interim.

Nobody really knows anything about the fog's origins, though it is likely unfathomably old. It has been known to shelter those who flee destruction and guide those who drift helplessly in space, for a price, sometimes a steep one, other times a small one. For example, a pact with a machinist led to the invention of the fogborne.

The number of such pacts involving taking on a fogborne crew member has increased lately, though not to the point where it is constant, suggesting the fog is slowly taking an increased interest in the outside world.

• Fogs in fogbornes are very individualistic, and value their own purposes and the knowledge they've collected over all else. As such, they will often try as hard as it can to not engage in a fight even to protect its fellow crewmembers.

• Fogs sees itself as higher than others, viewing the outside world as something they can learn from, and too lesser to be "of their concern." Fogs have only involved because fogs seems to have a fascination with how "physical beings" work to survive, how they interact, and how they function overall and interact with the world around them. However, they are uncaring, and usually view problems had by others as amusing, more interested in seeing how it plays out than getting involved. While fogs are far from mean, compassion is simply an alien concept to them.

• They are more sociable to hivemind species, as well as members of species who have devoted themselves to the pursuit of knowledge. They still view them as lesser, but they tend to show more respect towards them.

-Back to Species Menu-
< Floris
Frejynk >