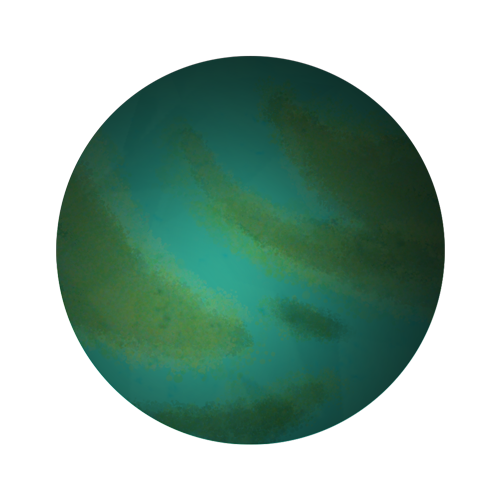 “A good planet to visit if you're an art connoisseur! Just remember to remind the locals that they can't just take your stuff! Or maybe let them have it anyway, for the full Taialnondemi experience; maybe one day you'll see a mialcsem with a head that was your old item!” — Tourist guide to the universe

The planet is mainly swamplands and consists mostly of water, though there are rainforests interspersed throughout it. Taialnondemi has many predators, mostly large freshwater animals who hide in murky swamps and thick rainforests while they await poor mialcsem who cannot see them until it's too late. As the mialcsem advanced in technology, they were able to drive away these animals from their settlement, but any people visiting the untamed areas of Taialnondemi should beware.

The mialcsem cities are well-protected and like everything mialcsem make, look like art pieces; what they lacked in advancement of weapons, they made up for in advancements in art. Their cities are very integrated with the nature around it and some cities are even protected by a large but tamed predator.

There has never been any war on Taialnondemi. The reason is simple; if the mialcsem were to have a war it's very likely they would come back with more mialcsem than they sent out. There would also be too much worrying about which side has to take care of the child - a war on Taialnondemi would slowly become one huge child custody battle.

Thus, with such deterrents keeping the mialcsem from engaging in all-out physical battles, their society became focused more upon verbal warring. Acerbic words replace acidic ammunition, and philosophical debates are usually the most violent thing one will see different cities of Taialnondemi take to.

Without the need to make an arms race out of weaponry, mialcsem instead spent the majority of their days creating artwork around their landscapes; after all, they had already created an artillery strong enough to scare away their predators.

Raesthart: What amounts to the "main city" of Taialnondemi, the majority of mialcsem government officials congregate here. Museums, whether of mialcsem history or art; stores offering actual food rather than only the liquids mialcsem themselves eat; Raesthart is the most tourist-friendly city one could ask for. The city has even managed to tame a large alligator to docilely prowl the outskirts of town. Individuals that live here are often given particular attention by other curious mialcsem on social media.

• Most who visit the mialcsem's homeworld tend to come to marvel at their masterpieces; this is something the mialcsem are more than happy to show off.

• Mialcsem love tourists as they tend to bring strange items with them for the mialcsem to barter for.

• Many robots come to live at Taialnondemi due to the fact that mialcsem treat them as equals, rather than lesser for not being organic.