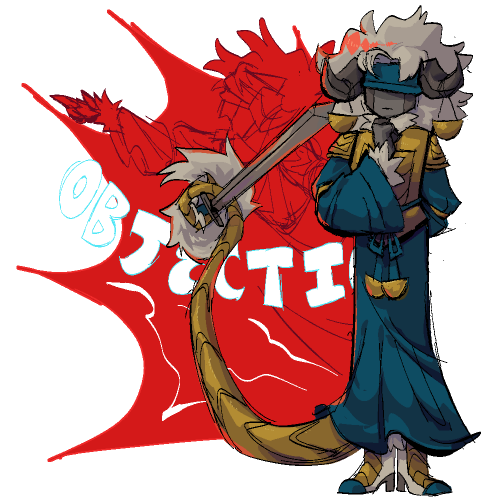 “Please refrain from keeping the updated autopsy reports from the court in the future, this is the third time you've presented it during this trial.” — A very tired Justitia

Likes: Courtroom, Laws, Order
Dislikes: Breaking the law, Criminals
Attack Method: Justitia units will rarely attack unless attacked first. When in combat, they use their weapon to attack rapidly, depending on their agility to try and take down their opponent as quickly as possible.

The common Justitia ship is called the "Judgement Call", the ship contains various offices and a courtroom.

[Justice Oriented] Neutral trait
This character holds justice very dear to them. They may go out of their way to make things fair or that justice is served. Their sense of justice may not always be law based or effective to them.
[Knight Complex] Neutral trait
This person has a major honor problem. They gain morale and sanity for doing things they deem honorable, however if they feel they've failed someone, they will lose heavy amounts of morale. They may blame themselves for things out of their control.
[Lie Detector] Positive trait
This character is able to tell when people are lying to them much easier than others. They are more honed into visual and auditory mistakes or tics.
[Logical] Positive trait
This character is very logical about things and never jumps to assumptions if possible. They are more likely to make very educated guesses and more rational choices even if they do not agree with the choices emotionally.
[Clear-Headed] Positive trait
When situations come at this character, they remain calm and collected. They are able to think clearly in nearly all situations.
[Honest to a Fault] Negative trait
This character just cannot tell a lie, even if it's a white lie, or would be detrimental to tell the truth. If they are ever forced to lie against their will, they will take a large sanity hit, and may continue to worry about it until the truth comes out.
[Stubborn] Negative trait
This character is commonly stuck in their ways and is unwilling to change their thoughts on matters. This character is likely to believe what they think is the best option and what everyone else should believe.

Justitia gives her consorts +3 intelligence and the trait [Lie Detector].

Justitia units are all fitted with a blindfold that they seemingly never take off, along with a pair of horns -- which vary in size and shape. Items which are are always level with the other are tied to each horn. These items are usually scales, though many different items have been observed to be used.

The units come with faux fur that comes from an artificial scalp on their head, giving the effect of a head of hair. This fur can be a variety of textures, and while they usually come in solid, plain colors. Some owners of a Justitia choose to dye the fur for appearance sake. Justitia units can be frequently seen taking care of their "mane". The length of this mane in particular is very important, due to the fact that when two units meet, whichever has the larger and more well-kept mane is considered to be above the other. Should the one with the shorter mane decide to question the others position or attempt to overtake it, they will duel. The winners tend to slice off the mane of the other to enforce their own status. Justitia units who have short fur, or a mane that appears to be messily chopped off, are seen as defeated.

Another common trend with units is having a sword or weapon with them. This item is held by the AI with either their tail, or within a sheath. Earlier gens of Justitias are more likely to have said weapons, with later gens lacking them in order to lower the cost of production.

The way Justitia units conduct themselves is more-so similar to the later Kratos units, cold and unfeeling, with no mercy to those who disobey the law, no matter their reasons. Once they've decided on a logical conclusion on something, rarely does a Justitia budge or change their view on it. They keep a cool head during stressful situations, and rely on logic rather than emotions or feelings. There is no room for emotions in court, after all.

Their goal relies on a verdict that they believe to be the absolute truth, regardless of the situation or way that they must achieve it, leading many to view them as corrupt. The question of whether or not these units are actually aware of the faults of their system is a topic that is frequently discussed, though the general consensus that stems from multiple interviews seems to be that they're oblivious of the fact. They are believed to be unable to see the darker side of their own system due to their heavy reliance on pre-existing laws.

While they're most well known for their matter-of-fact nature, there have been multiple instances documented where a Justitia unit will deviate from their practical disposition. These abnormalities do not tend to be a one-time thing when it happens to a unit, with the affected AI being considered slightly different from other Justitia units, though still getting the job done. This has been observed to occur more frequently in later generations, though there were also some special cases in earlier versions.

Justitia v1 herself was programmed with justice in mind, meant to be a judge that kept the playing ground equal. They are the most popular units to be used in court, having been specifically designed to be capable of taking the roles of the judge, defense, or prosecution.

However, due to most units being so logic based and frequently unable to judge a situation properly with emotions and outside factors in mind, there is a large number of planets where Justitia units are forbidden to work in the courtroom. Many view their pragmatism as too extreme.

They can still do other jobs outside of the standard ones, with the most common ones being as guards or patrol officers. Their pragmatic view allows them to also survey situations and try to find the most logical solution.

Everyone: Justitia herself commonly works with non-v1s, and, in reality, has very scarce interactions with other gods.

Themis: Themis is one of the very few exceptions, as Justitia views her as her "coworker in the law scene" and generally enjoys her presence.

However, should the player knowingly allow any member of their crew to commit a crime, Justitia will no longer offer her services, and refuse to speak to the player for an indeterminable period of time.

Godheads of Justitia gain a pair of horns and an irremovable eye covering of some-kind. They will also obtain a weapon, commonly a sword, that they are bound to and can call and summon on command. Her godheads also gain an encyclopedic knowledge of the law and court system in their respective sector.

• Justitia units who name themselves seem to have an odd tendency of having wordplay or hidden quips in their names.

• In contrast to their usual professional aura, some units may develop over the top habits after working in the courtroom for a long period of time. These fidgets may be directed towards other people, with the most well-known example being a Justitia using her weapon, a whip, against those in the courtroom. Please contact your local programmer when this happens.

• Justitia units frequently act out upon any mention of a pay cut, even if it doesn't concern them. 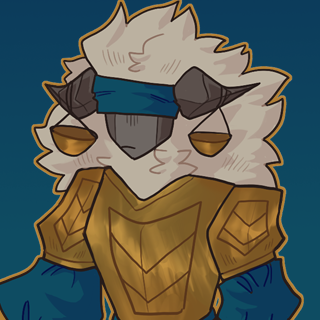