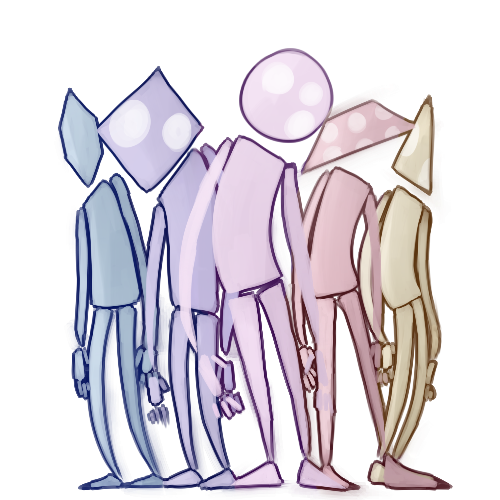 Common Jobs: Manual and menial labor
Likes: None
Dislikes: None

[Pacifist] Neutral trait
We do not fight. We will not fight.
[Jack of Trades] Positive trait
We understand many things. But never enough.
[Unnerving] Negative trait
Our form is blessed. That others cannot understand is unfortunate.

Pons have no gods.

Pon resemble thin upright hominids with various euclidean geometry for a head. Their skin has been described as feeling somewhere between marble and eggshells. Their internal organs are similar, resembling basic geometric shapes connected with cylinders. The quantity, shape, and function of these organs varies from pon to pon.

Pon are capable of ignoring most forms of damage, requiring roughly 80% of the body to be destroyed or otherwise seperated. Pon heal by scooping a piece of Non, sculpting it to fit the area, and inserting the material. It will repeat this until it is repaired. This leaves no scars, or indication of injury. Pon will still attempt to do this even when on other planets, inside buildings, or even on spaceships. The material they scoop up, if any, will not change into the substance they need to heal. They will still attempt to mold the material as if it were what the correct substance, and insert it into the wound. This does not heal them. In fact, in attempting to do so they may damage their hands attempting to retrieve the material that simply isn't there. In the event they fail to scoop up any material, they will still go through the motions, afterwards treating the injured area as healed.

When killed, the pons body will collapse into powder, leaving any trinkets they may have taken as payment behind.

Testing has shown that pon are almost, if not entirely immune to disease. It is possible there is a disease that effects them as they do have a body that by all means should be possible to infect, but so far disease simply won't infect them. They can however carry diseases that spread through contact.

Pon are completely monotonous individuals with few (if any) traits telling them apart from other pon. Pon have almost no needs or wants, and are frequently used to pad spots when filling out a crew. Pon have no physical need for sleep, but regularly fall unresponsive for eight hours each day. When not assigned to work, the pon will usually stand in place or wander the vicinity until new orders are given.

From the moment pon were discovered, and determined to be harmless, they have been regularly abducted from non for whatever reason the abductor wished. Manual labor, test subjects, expendable assets, as long as the pon was not required to engage in combat it would work without complaint.

The galactic community however had mixed feelings about them.

They weren't the strongest workers, the brightest, the fastest or even the most charming of workers, but there were a lot of them. As a result, companies and miscellaneous third parties were swarming non and abducting them in the hundreds of thousands each week. However, this labor boom couldn't last. Eventually the number of pon on non were greatly reduced, and other species were sick and tired of being steadily replaced without the means of obtaining new jobs. Thus, the pon regulatory committee was formed.

Pon were to be legally reclassified from resource to species, and the quantity of pon that could be taken from non was limited to ten thousand each year. As the process of obtaining large quantities of pon was made significantly more difficult, these ten thousand are mostly obtained by groups in need of padding out a few jobs, or the odd ship in need of an extra low maintenance crewmember.

Non, the homeworld of pon, is a completely flat world barren of all life other than Pon. The surface is completely smooth, and almost a blinding white. When pon die on non, the body will melt into the planet leaving no trace behind. When something other than pon die on non, the body will instead crumple into a small ball that the nearest pon will attempt to remove from the planet. As there is no fuel to be found on non, it is advisable to bring enough to leave or you will have to wait until another ship comes by. The surface of non is nearly indestructable, with only pon being able to alter the landscape, albeit briefly, in any way.

Buildings or other structures located on non will after two to three months vanish with no indication there was a structure in the first place.

Orbiting non is the station ran by the pon regulatory committee, where all travel to non is legally required to first visit.

Lon: When pon are asked if they have any cousins, they will describe the lon. The heads of lon are often non euclidean, resembling abstract geometry continually shifting. The bodies of lon are completely hollow, and they will die when their skin is punctured. Lon have not been observed on the surface of non, with pon stating that it is not yet their time. When asked when it would be time, pon will respond with the exact same message: "When the sky is black and the stars are dead, the lon call us home." On other planets, people will, very rarely, encounter a lon. These encounters are brief, with the lon vanishing into a nearby mob of pon. When the mob is dispersed, the lon is gone. Questioning the pon further on this subject is met with silence.

• When the first pon was discovered, they continually made noises and odd gestures during their vivisection. When later translated, the pon was calmly describing the function and purpose of each organ.

• If it weren't for the fact more pon appear on Non each day, it is likely they would be extinct due to over harvesting, a lack of survival instinct, and an inability to heal any wounds they gained while working. As is, dropping by non to obtain several low maintenance crewmembers is done fairly regularly.

• Pon ask for nothing, they want for nothing. They will not ask for payment, and will generally ignore payment if offered. Rarely, a pon will accept a small trinket, pushing it inside its torso before resuming normal pon behavior. As of this article, no pon has ever provided an explanation as to why they do this.

-Back to Species Menu-
< Polynoid
Poppet >