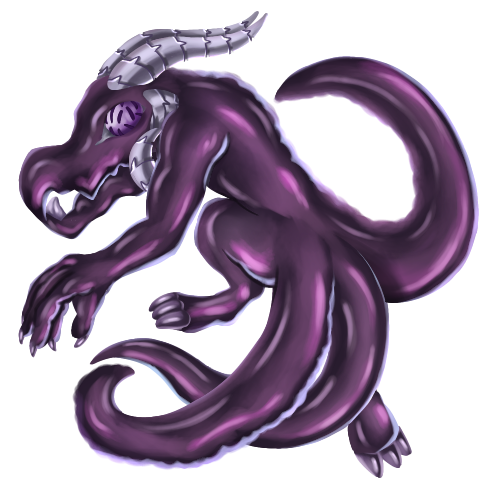 “Sure, being a monster makes me feared and all that, but I get a good night's rest knowing that it helps keep people from being like the fellow that I am in my work hours. That fellow's an awfully mean person, and they'll bite down anyone who thinks that a blessing is something to look up to. Sometimes, keeping a hateful mind on things is necessary to succeed in life, or anything it can give you.” — Reidhall

Reidhall appears like a terrifying and bloodthirsty anomaly. The things that draw the most attention are his sharp horns, the peculiar shape of his jaws, and his multi-irised, lavender eyes that look every which way but never on anything in particular. He has dark and faintly iridescent purple scales covering his body, and sharply clawed feet and hands. Although he possesses three tails, one constantly hangs limp and unmoving while only the other two remain functional. Inspection towards Reidhall's spine, neck, and the ridges of his two functional tails might give someone the impression that there was a soft fabric or fur hidden underneath the monster's skin.

Reidhall has four large and and light purple horns, with two of them being curled and the other pair straight. He has a long, beak-like mouth that pries itself open at the very ends, and a single tooth lies on the lower jaw of the opening. Paying close attention to Reidhall's appearance might give one the impression that a lovirtis is under all those blessings.

Fortunately for them, those suspicions would be true, as Reidhall is simply an ordinary lovirtis parading around in an anomalous suit. Reidhall himself is a lovirtis of average height and build, a particularly thin and unhooded woolen cloak, and two red eyes instead of the normal heterochromia for his species. The scales around his eyes and palms are a dark blue color.

Reidhall, despite working as a professional limboist, tries his best to be open-minded about the many strange things of the universe. Despite this, he cannot help but let his true opinions shine through about topics more often than not.

Similar to the politics-fueled lifestyle of his younger age, Reidhall can occasionally be found talking on online forums about his views on the world. Instead of openly (and harshly) bashing opposing views as he would have done in the past, he tends to make long debates that, more often than not, end with him "agreeing" with the opposing side as he can't stand to look at something that differs from his world view so much. He's absolutely glad when he feels as though he truly changed someone's mind through one of these arguments, but most days, however, he will simply use online communication to talk with the various friends he met across the universe and decided to keep in touch with.

Reidhall loves talking to new people and learning about their life experiences. He's often the one to start a conversation, and enjoys small talk as a way to get to know the other person better, if just by a little bit. The calm and welcoming manner in which he acts towards people in casual conversation starkly contrasts the stern and commanding manner which he adopts during work and his frequent arguments, a side-effect of the nature of his job and his original motivation for taking it.

In his younger years, Reidhall was an exceptionally politically active lovirtis. He found particular interest in the limbo gods, and this interest gradually morphed him into a devout limboist.

One day, an anomaly crawled up to Reidhall's doorstep and died as soon as he opened the door. He saw this as a message, though it was likely nothing but pure chance. The action of the anomaly infuriated himself so much that he took its corpse inside, cleaned and treated it to a wearable costume of a skin, then wore it in a public and popular spot while screaming about the limbo gods.

The action quickly got Reidhall arrested, but as he was allowed to keep his anomaly suit, he became a repeat offender for protests against the limbo gods that would terrify anyone who saw him in costume.

That is, until he started to become recognized.

Word of his actions had begun to reach other planets, and various limboist organizations contacted him with the offer to perform off-world in exchange for money and the promise to not get arrested or shot at while doing so. Reidhall accepted, and his first job under these new organizations went smoothly, as they had the power to warn onlookers and the police that Reidhall would be arriving soon, and that he was not an actual anomaly. Their influence would allow him more of an opportunity to state his views to the people. His success from the first run led to permanently working with the organizations in an effort for people to hate the gods.

Reidhall would go from planet to planet, scheduling times to appear to the public in costume and give passionate talks about the limbo gods, and occasionally act out the violent actions of a typical anomaly to scare the people into hating and fearing the limbo gods.

Despite the job's unconventional nature, it was good work, and Reidhall saw his actions come into effect by people contacting him and saying that they had decided to convert to limboism after seeing his protest performances. He was glad to see the hate, but started to feel as though the subject mattered less and less as time went on.

Years of dressing up as an anomaly and using it to explain why the limbo gods were bad eventually induced a stark sense of monotony on Reidhall, and his incredible passion for hating the limbo gods started to lose some of its fire. Less time being focused on politics due to his work itself ironically shifted his primary motive for dressing up as an anomaly for the sake of protesting and information to something nearly as much about a simple income instead.

He still expresses great animosity towards the limbo gods and will gladly explain that during the talks after his shows. However, as age starts to creep up on him, Reidhall admits that if he could go back to the day where he found the dead anomaly on his doorstep, he might question if he should repeat his actions, or leave it out to the cold.

• In his pouch common to all lovirtises, Reidhall carries fanmail from the occasional person who decided to write to him for his actions. He re-reads them from time to time and loves to show them off as if they were his own children.

• Over the years, Reidhall has gotten several offers to have a fake anomaly costume made for him, instead of letting him continue to wear the decades-old skin of a once-living creature. He has denied all of these offers as he feels it would take away from the authenticity of the act, and because he feels a faint sense of sentimental attachment to his costume.

• Reidhall enjoys woodworking as a hobby and can be found spending parts of his free time carving out small sculptures of all the different buildings and architecture he's seen throughout space.

-Back to Legendary Menu-
< Red
Rinmye >