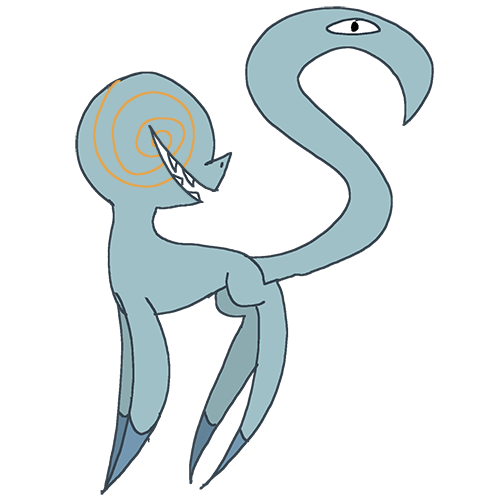 Attack Method: Surround with pack and bite into victim.

Eyesaurs, while looking somewhat like a feline, are reptilian. Their feet end in hoof-like points, have long tails, pointed teeth, and spiral markings on their head. Their one eye is on the side of their tail. They come in shades of blue, with the spirals mostly being orange. Their snouts are rather short, and they are always seen with their mouth open, making sounds that vaguely resemble humming.

Eyesaurs are mostly used as guard dogs, due to their natural want to be in packs and aggressive nature. They never seem to be quiet, always humming to each other. While mostly aggressive, they can be calmed down with food, or if the person is good with animals. Eyesaurs are unable to talk, though they do act like a hivemind when in packs.

• Eyesaur do not enjoy belly rubs as much as one would think they would.

-Back to Fauna Menu-
< Eyegret
Ferro >