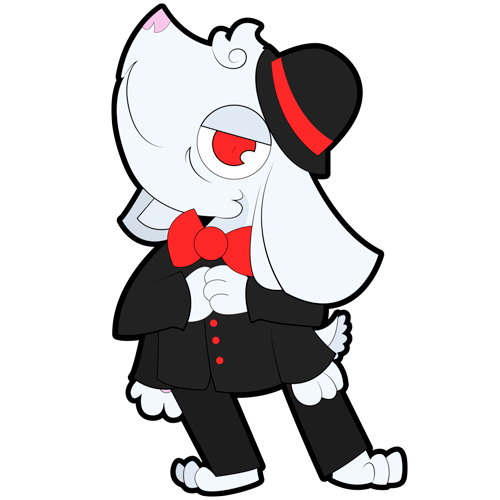 “We shall now be exorcising the demon from the patient's body. Please lit the candles while I say the rites.” — A kounini doctor in the middle of a heart surgery

Attack Method: Try get the opponent at a disatvantage through trickery. Flee from fair fights.

It is unknown if Kounini worship any gods or if it's all just apart of the act.

The kounini are thin, bipedal rabbit-like creatures with a few protruding teeth. They have 4 human-like hands which they cover in white gloves, and also 2 pairs of ears with one pair being much shorter. All but a few kouninis have white fur and red eyes, but they will use cosmetics to alter these in order to look special. Kouninis always dress fancily, to the point that one would go swimming in a ball gown.

Kouninis take pride in their ability to deceive. It's common to see a kounini faking some manner of supernatural ability: to them, having a great act is a sign of prestige. In the rare case that a kounini actually has a supernatural ability, they will instead pretend that it is fake. Being discovered to be a fraud is just as shameful to them as being discovered to be genuine.

A kounini will go to lengths to avoid visiting a doctor, as their true appearance might be revealed during surgery. They will stitch their own wounds, set their own bones and pull their own teeth. Many would make decent doctors if they did not endanger their patients in the process of passing their work off as a miracle.

Even though they lie and cheat, kouninis are not amoral by nature. Most of them will be eager to go after cruel and oppressive people to put their abilities to a test. The kounini government only utilizes capital and sometimes corporal punishment, as it is more often than not useless to try to imprison one.

Their cultural focus on obfuscation causes many a kounini to grow up to be an excellent conman. This upbringing has a downside, however. A kounini can often be punished for telling the truth and will commonly become a compulsive liar. Since deceptions are par for the course for them, your average kounini loves pranks.

There are hundreds of different versions of the kouninis' history, and not a single one is at all plausible.

Catch and release: Some kouninis are capable of consuming live birds and releasing them, alive and well, at a later date.

• As a result from the rampant identity theft and the desire to pretend they're special, the kouninis are ruled by an ever changing group of imposters that pretend to be the same monarchs. Instead of having elections, the government changes policies by faking a coup when nobody pretends to be a government official anymore.

• Kounini parents change identities just as often as other kouninis. Young kouninis make use of this by asking these new parents for toys and trips they "promised."

• Because of the strong reactions aftiks tend to give, the kouninis find that they make a great audience for their pranks and mysticism. Kouninis are fond of aftiks because of of this, and kounini conmen tend to avoid scamming them.

• Kouninis often feign their deaths and steal the identities of their deceased. The oldest "known" kounini lived for 500 years, but the records of his life are dubious at best. 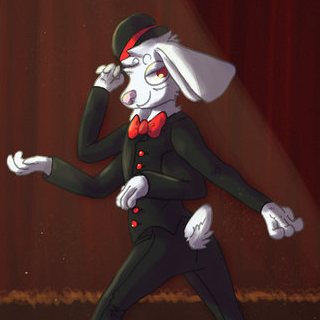 -Back to Species Menu-
< Koulev
Krell >