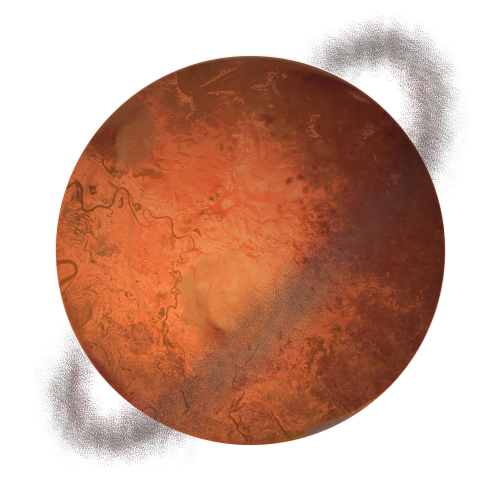 “Ok but how can a species that doesn't exist have a home planet?” — Some notail

Fauna: Unknown/None
Weather: -0% humidity except for rare periods of 100% humidity.

The planet tends to be described as way too dry, as if the planet is drained of water entirely. This is not true, as the planet does have oceans, rivers, lakes, and many floodplains. Due to irregular weather patterns the planet will not have any rain until a monsoon season begins, and they can begin seemingly at random intervals of the planet's year, and end the day after. Extremely heavy rainfalls will occur, and have swept away unprepared travelers and their ships, and burying them underneath the mud of the floodplains. Most plants tend to be metallic to withstand harsh sunlight and constant UV rays, but are filled with a wet sugary gel. Despite the taste of metal they are typically entirely safe to eat, like a vitamin custard.

Due to the planet's air of mystery hundreds upon thousands of archaeological dig sites have sprouted up on the planet. Followed by camps, supply depots, and then a couple of cities sprouted up to continue supplying the local modern culture of digging up an extinct race's world.

Ismenips: A symbiotic gargantuan grazer creature with floating heads and photosynthetic 'wings'. These wings are the symbiotic creature this fauna is in a relationship with, and they inject food into the bloodstream of their host that they synthesize from the air and sun. this is done in exchange for a safe place to root themselves, and for a steady water supply. Their heads have 3 eyes on every side, and the 'mouth' is on the back of the head. The back leg of the creature functions like a conveyor belt to push dirt onto it's massive back so that the symbiotic fauna on it have somewhere to root themselves onto once the dirt has been absorbed into their gelatinous shell-plates. Supposedly the closest living relative of the pet/slave species who's corpses make up the orbiting corpses of the planet.

Tinruap: An often inactive ambush predator, and will travel up to a mile when active to chase prey, burrowing through the ground at extremely high rates. They typically don't need to travel to chase prey, as they sit 1.5 meters underneath the surface with their head folded out like a flower ready to close on prey. Some will use arms or rod-like teeth to trap prey in a pressurized or cagelike method.

Fauciso: An herbivore that used magnetic pulses to find plants, pinging them, and it will move to a mesh of the nearest pingback, and the juiciest pingback. They have been known to accidentally eat people who have ferrous blood. They tend to be a mix of elephant and sluglike in bodyshape, but drag themselves on a collection of long crab-like legs. Typically cow sized.

Bitraal: A seven legged hopping carnivore with fluffy fur and insectoid eyes. Their five back legs launch them with a magnetic pulse forwards while their two front legs prepare to pin and stab into prey. They can drift up in the air for a period until they find prey, at which point they will stop and dive bomb. While they lack wings their legs all have a membrane that can sustain the magnetic repulsion against the surface so they can hang in the air.

Kort Oxes: A type of ox-like herbivore with massive eyes atop stalks that ping for plants similar to how the fauciso find plants. They smaller than the ismenips, but are considered towering beasts. Their eyes do tend to be victims of zapping nells, parasitic fungi, and the predators of such.

Meld Crows: A omnivorous bird that eats the fish in the lakes, rivers, ponds, along with the fungi in the ponds, the infested eyes of kort oxes, the predators of the parasitic fungi on Kort Ox eyes, and the predators of those predators. Despite this complex network a single meld crow is nonthreatening to almost all forms of life, and is akin to a sparrow. As they form larger groups their bodies will interweave and connect to form an amalgamation of bones and feathers, becoming a steadily more threatening beast. Exceedingly large flocks of meld crows are known to speak multiple languages, take on Zapping Nells, and even take trips into the upper atmosphere to drink clouds. They will avoid forming large groups, as when one dies it causes the others to die in tandem, and their bodies end up falling to the ground or into water where detrivores and ambush predators will feast on what remains.

"It is believed that at the start of the universe the great progenitors and precursors, the isments, lived on this world in an endemic paradise alongside their floating pyramid headed pets. A great tragedy occurred on this planet, and the eden and it's bounty began to fade, and the people of the world were sent into famine. Tragedy upon tragedy continued to happen, but the people remained steadfast and built massive necropolises and grain silos to adapt to the changing world. Eventually they went extinct, and for some reason their pets float in an orbital cloud around the planet. Our precursors, the creators of this universe, may be extinct, but their knowledge will save us." - The Thesis Statement of some archaeology student.

The planet's actual history isn't well known, but a few close knit group of archaeologists believe the planet was unlike its present state, and was host to a precursor race responsible for all sentient life. The precursor race is believed to be extinct despite them randomly being sited across the universe, but most other archaeologists disagree on nearly every aspect, and some refute the idea of there ever being a precursor race, along with the idea that any of the pyramids are grain silos.

All in all the planet's known history begins with some archaeologists needing to land and hide from some pirates only to find this one with an orbital field of long-decayed corpses, and pieces of technology unable to be used for anything except scrap metal. When they got back to society they told their benefactors of this magical desert world, and left on an expedition.

More archaeologists left on the expedition. Followed by their rivals, their tutors, their pupils, their colleagues, and generally each and every archaeologist who was interested in the planet. The first archaeologist to jump on the bandwagon is cited as saying "Quod si sic mihi recte stercore bonum", or as it translates "that is some good shit right there if I do say so myself."

In present time this planet is considered a hub of archaeological activity, and the largest modern settlements are little more than archaeology universities and museums.

Currently the most popular theory for what the pyramid shapes on the planet are intended for is a mix of grain silo, burial site, bank, and cryogenic storage facility. Nobody can prove these claims yet, as every fully explored pyramid turns out empty or completely hollow, and the unexplored ones are extremely dangerous.

Digcity: The largest settlement on planet, and one of the most active archaeology university in the universe. Numerous supply depots, active dig sites, and camps exist in this settlement, and it was named Digcity because the bandwagon of archaeologists that landed on the planet formed a network of active dig sites that took up a metropolitan sized area.

Neckropolis: The largest and most unexplored pyramid on planet. There are several camps and a supply depot at the main entrance, and archaeologists will pay good money for someone to walk five steps ahead of them in the tunnels, along with bodyguards. Here they mostly just want meatshields. Nobody's entirely certain what the death toll, but everyone agrees if that number was deposited in their bank they'd have to find out where it came from because it is a really pretty number in money form.

The Spire: One of hundreds of towers on a dessicated riverbed on the planet, The Spire is believed to have something to do with controlling irrigation to the nearby fields. Some of the riverbeds flood as if an ocean has been plopped right down on them on a routine schedule, whereas others flood extremely rarely. The safest and most reliable place to land in these areas sadly will always be the riverbed, as the local fauna tends to be more openly hostile, but refuses to enter the riverbed.

• A handful of conspiracy theories believe that the entire planet is a hoax made by isments who are neither extinct, nor are they such a kind and happy form of precursors. I am one of those conspiracy theorists and I urge you to hide before their mindcontrol corrupts you like it did my colleagues.

• The fauna have a complex yet intricate ecosystem that is only starting to be documented and understood, and in a number of cases the biologists will reference a creature called the "zapping nell", but nobody has seen one. They're believed to eat the eyes of Kort Ox's, and that only a massive flock of Meld Crows can fight one off.

-Back to Planet Menu-
< Scholae
Shearattle >