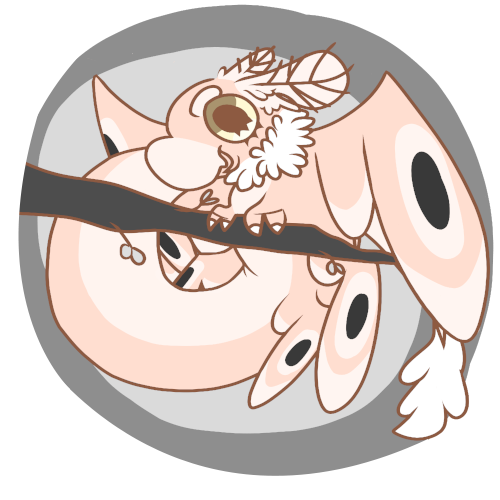 “Y'know I'm glad I wasn't eaten by that thing, but I'm kinda insulted that I wasn't good enough for it.” — A bitter near-victim of a blood moth

Attack Method: Stay still until prey is close enough and fly toward victim when they are in range. Then, tear into victim using teeth and claws while keeping self aloft with wings.

Blood moths are large avians that usually sport a light pink to light orange color. They have short and round beaks with many sharp teeth. They also have feathery ears and large, round eyes with large pupils. Around their necks is a collar of fur, usually white. Below this, They have two short appendages each with two digits topped with sharp claws.

Their torso is very short in comparison to the rest of their bodies. The organs in there very compact because of this. Most of their body is taken up by their long, thick tails, ending in a tuft of fur, that tuft being the same color as their neck fur. They have 3 pairs of wings, descending in size as they go along the body. These wings are patterned with black and white spots, mimicking eyes.

Blood moths are very territorial, tending not to leave an area once they've settled in one. They can be selective with their choice of prey, using their wing patterns to scare away any fauna or sapient species they do not hold up to par. If a blood moth finds a creature satisfactory, they will launch themselves at the victim with a powerful flap of their wings and start tearing into their new meal.

Often, blood moths, if they have not eaten too much of the creature, will lay their eggs in the fresh corpse. Blood moths have no sexual dimorphism and any blood moth is able to lay eggs.

When not hunting, blood moths perch on trees in their territory scaring off anything they want to leave. To stabilize themselves while perching, they will wrap their tails around the branch alongside holding on with their claws.

• Each blood moth has a different standard when it comes to its prey. Because of this, it is highly advised to stay far away from a blood moth's territory, even if one thinks they won't make a good meal.