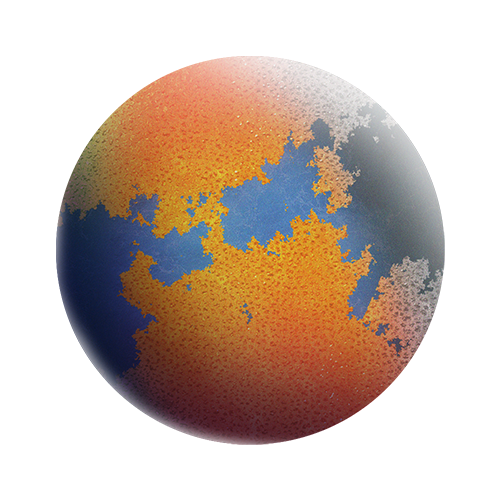 “Ever seen a person live here their whole life? It's always 'You come, you stay, you get right out as soon as the season starts to change.' Me? I'm stuck here for a while. There's always trash to burn, no matter what the weather's like.” — Alinzar employee

Alinzona is a planet covered by grasslands, small rolling hills, and the occasional forest or mountain range. Two oceans take up around 55% of its surface, and the land itself has an only slightly notable amount of lakes and ponds on it. The soil is fertile in nearly every region of the planet. Though its geographical features are relatively unremarkable, Alinzona's rotation around its sun provides it with massive, 65-year-long seasons that dictate the population and purpose of the planet.

The abundant season is fairly warm and is the prime time for farmers to temporarily move to the planet and produce crops and rations to be exported to other other towns and planets. These farms frequently offer tours to any visitor, and Alinzona possesses unusually large amounts of crops that can be turned into dye, making it easy for a visitor to come and recolor their outfit. Pirate activity is at a low during this season, along with the windy season, due to the high population levels caused by mild weather.

The burning season is fairly hot and causes mild immigration out of the planet due to it and the fact that it is the primary season where Alinzar incinerates their trash, received from both the planet elsewhere are other regions of space. While the incineration and recycling centers run every season, their increased workflow during the burning season makes it an opportune time for visitors to purchase any salvageable or recycled garbage, or to illegally scrounge through soon-to-be discarded trash piles if they do not care about possible illnesses. The smoke caused by the incinerators makes the air slightly unsafe during this time, and most areas by them recommend that residents and visitors wear masks when outside to protect their health. However, air purifiers by the incinerators generally make the air safe to breathe by the start of the next season.

The windy season, while providing Alinzona with a high population due to its fair weather, is a surprisingly quiet time economic-wise. It produces moderate amounts of crops and moderate amounts of waste disposal, but nothing notable. It is primarily a season for residents to live a quiet life before the barren season, and while visitors might enjoy some tourism due the planet being a minor getaway location, finding jobs or tasks is the most difficult during this time due to a lack of large amounts of economic activity.

The barren season is, by far, the most hostile and unsafe season on Alinzona. Temperatures drop to dangerously low levels during time, promoting the emergence of various powerful fauna attuned to the cold and snow. Most residents leave Alinzona during this time, leading to far-increased pirate occupation with little law-abiding citizens present to drive them away. However, it is surprisingly easy for visitors to find a job during this time due to offers to hunt down the various dangerous fauna, and to provide an extra hand during a generally understaffed season.

Alinzona was once a planet known as Zona-5-59 that contained unintelligent lifeforms but was otherwise unremarkable. Located by the borders of lawless and Federation-run sectors, it was often used as a dumping ground by pirates who needed a place to discard their unwanted and occasionally illegal goods. The planet, once pleasant, became a small spot for pirate activity for a few decades before the surprise onset of the barren season on a planet that was thought to be permanently temperate. The harsh, frozen conditions of the barren season forced the pirates out, and its reputation as freezing and uninhabitable made Zona-5-59 abandoned for several more decades, even as its barren season ended, until it caught the attention of a private recycling and waste disposal company known as Alinzar.

Alinzar generally had a clean reputation and managed to purchase the planet for exceedingly cheap due to its proximity to lawless sectors, quickly renaming it from Zona-5-59 to Alinzona. Seeing the economic appeal of a lush planet with piles of abandoned trash on it, the CEO of the company, a plantolk named Fulgo, moved her company's headquarters to an area that they would soon call Ozona and created incineration and recycling plants around it and other regions of the planet. The institutions were meant to dispose of the waste left behind by the pirates, and it sold its recycled parts for ludicrous money due to the rarity of what was likely stolen and busted-up items made from valuable materials. A large part of its income also came from importing and disposing of trash from nearby Federation planets.

Having successfully cleaned up the planet to publicly habitable levels, Alinzar constructed buildings in the city they now called Ozona and sold the homes and land to aliens interested in moving to a lush, if not starkly seasonal planet. Land the company did not wish to pre-build homes on were sold to farmers who took the great amount of open land on the planet and outside of Ozona to turn into agricultural regions, enticed by the appeal of having cheap land due to being near the lawless sector on a waste-disposing planet thankfully controlled by a generally lawful company.

Most of this colonization took place during the burning and windy seasons of Alinzona, causing great amounts of people to move out as the barren season hit due to the cold. However, Alinzar continued occupying the planet during this time due to still being able to fulfill its purpose of disposing of and recycling trash, and its presence as the abundant season returned made it significantly easier for former residents to return, solidifying Alinzona as a planet with a population and purpose that shifted with the seasons.

Ozona: The largest city on Alinzona and the city of Alinzar's headquarters. Due to its original cities being constructed by the company, Ozona is a relatively eco-friendly city with a number of buildings that are actually constructed from fully recycled materials. Its air is safe to breathe during all seasons due to being positioned away from any incinerators, but it is in close proximity to various farms, and has various markets and shops to buy goods from, including various recycled or repurposed goods from the faraway recycling plants. Though encounters with pirates on Alinzona are highly uncommon during most of the seasons, Ozona is, by far, the most protected city from crime. Alinzar's headquarters is positioned in the center of the city and is open to the public, occasionally auctioning off the greatest of their recycled (and thus, fairly unique) goods.

Tyria Gardens: The largest farm on Alinzona, it is functional from the abundant to windy seasons and promotes several tours for visitors to take and explore their grounds on. It produces (and processes) a wide variety of plants, making the purchase of rations from them extremely cheap. It also grows a number of dye-producing plants, and offers to recolor any item a visitor might have for a small fee.

Fulgo Incineration and Recycling Plant: Otherwise known as FIRP, it is the largest institution owned by Alinzar and is completely functional during every season. Certain trash of value is picked out and offered for sale by FIRP, and recycled products are frequently sold there, both as repaired versions of their original selves, or as completely repurposed products. However, the trash can technically (though very illegally) be gathered by an open landfill by FIRP that is surrounded by gates and surveillance. The constant incineration by FIRP dictates that all workers and visitors must wear a mask to avoid inhaling any smoke chemicals.

Seasonal: Alinzona possesses dynamic and long seasons that greatly change the planet's population and purpose depending on which season it is in. It has four main seasons of varying danger for travelers.

• Though Alinzar's permanent presence on Alinzona, combined with the presence of other residents during every season but the barren one, wards off most pirates, its proximity to the lawless sector still does attract higher amounts of criminals than most planets. Though Alinzar has tried to combat this by keeping a larger police department in Ozona and its incineration and recycling plants, other areas of the planet still face low, but notable, amounts of pirate occupation.

• While Alinzona can generally be considered a planet of low dangerousness during most of its seasons, the cold, the dangerous fauna, and the pirate occupation of its barren season turns the planet into a place of high danger during that time. The burning season can be considered a time of medium danger due to its own reduced population and harsh weather.