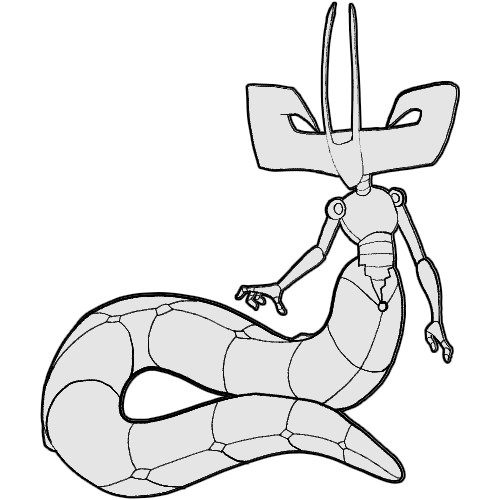 “There's only so much one can do to prepare for the future. But it is always more than you think.” — R.E.A.D.E.R

Job: Librarian
Likes: Silence, Books, Puzzles, Secrets
Dislikes: Noise, Stupid Questions, Being Ignored, Helios
Notable contributions: A robot of unknown origin. Despite his unique appearance, his creator cannot be tracked, as no known company in the universe takes claim to building him. He states to be custom made but won't divulge who built him or for who. Gives scarily accurate advice.

R.E.A.D.E.R is an AI with noticeably organic design and a shell consisting of three parts. The outer shell is snake-like and is the only one with eyes, three on the left side of its "face". It is heavily built to last, and though very hard to harm, the weight of it makes its movements slow and weak. The hidden inner shell is centipede-like, made of lighter metal and more segmented, and thus its movement is faster and it is capable of stronger hits, but without the snake-like armour, it is highly vulnerable. The outer shell has hidden holes for the centipede's legs, allowing more control in the movement of the outer shell. Last is the main computer, which resembles the torso of most bipedal creatures, with a pair of arms ending in common palms with rather long fingers, and a head.

The head is, for an unknown reason, faceless, and is equipped with two pairs of "horns", one being antennas extending upwards for easy communication, and the other extending sideways being used for magnetic field perception to make up for the poor eye placement. This was confirmed by R.E.A.D.E.R himself. All parts are metallic white, with neck, "stomach", and fingers slightly darker grey. Though he holds himself at about 7 feet high, the length of his body has been estimated at 20 feet and 2 feet, 4 inches in diameter, which prevents his ability to navigate most tighter spaces.

This design has been theorized to be for intimidation sake, as its size and predatory shape has a striking effect, but R.E.A.D.E.R's mostly docile and reserved nature makes that element of the design moot. Several other theories include it originally allowing him to connect his "torso" to a ship while keeping the two other shells moving, and it letting him act as several fighters in a single battle. R.E.A.D.E.R himself, when asked, claims it is a punishment and refuses to elaborate.

R.E.A.D.E.R mostly keeps to himself. He runs a library of rare, ancient, or unique books, and is very protective of his collection. He can be bribed to assist one or answer questions with a book. Said assistance is mostly comprised of advice for future decisions and investments. It had been long noticed and recorded by frequent visitors to the library that R.E.A.D.E.R's advice is always accurate, whether you obey it or not. Some believe he has future sight, though most dismiss it as the wisdom of old age. R.E.A.D.E.R's age is not actually known.

Aside from his notable love of literature, R.E.A.D.E.R prizes logical thinking, preciseness and punctuality. He will verbally praise those who show such traits or appreciation of them and berate the emotional, careless or late.

Unless he is fond of a person, he seems to enjoy confusing those who come for his advice. He speaks in riddles and vague notions, ones that are almost always only understandable after the event took place, increasing the belief in his "supernatural" ability to see the future. However, his advice itself, as to what decision to make, is always decisive, and he often offers it regardless of the wish of others, and regardless if he knows anything on the subject at hand, earning him a reputation of a "back-seat driver". When questioned in regards to his unusually accurate perception, he only says it is due to earned experience, sometimes bitterly adding he paid heavily for wanting to know the consequences.

Not much is known about R.E.A.D.E.R's past before the establishment of his library. He claims to have travelled a lot on several ships with several crews, and can tell stories of their adventures on many planets. When compared with records of the businesses he mentions, the crews he talks about are sometimes hundreds of years apart, and his personal presence there is never noted, though the detail in which he knows their adventures suggests his presence. He seldom makes mention of before his traveling days, and when asked insists he has left that life behind, often in a bitter tone.

During his library days, he has only been active to conserve historic literature pieces, sometimes claiming to have been there when they were written. He has been chased by some to be a governmental, financial, or spiritual advisor, and has always denied the lofty positions, demanding to be simply left alone. However, he seems to have a soft spot for those who stop by his library on their way to Fortuna, providing them with advice as direct as he can manage without the usual bribe of rare literature.

Some speculate he is some sort of discontinued v1, having displayed unique relationships with them he does not share with later models. He has strongly denied this claim, insisting on being a custom-built AI for an unknown patron, made simply to work a library, a claim his design, which makes reading difficult and moving between shelves a risky job, seems to disprove.

Dismantlable: R.E.A.D.E.R is capable of separating his inner and outer shells as well as his main computer from each other. He can control each part even when separated, though this concentration takes much of his mental capacities. Alternatively, he can attach his main computer to one of the two shells and leaving the other behind to use the chosen shell for its superior abilities.

• Though he treats most v1 AIs with higher respect, there are certain ones he cannot stand, perhaps due to old grudges or disagreements. The most extreme example of this is Helios v1, and by extension, other Helios units. When asked, he claims he sees their tendency to erase their mistakes from their memory hypocritical.

• He has been heard wishing to be a published author, though he refuses to show his current works to anyone but his closest friends, of which he has none. As such, no known person but himself has seen his writing.

• He sometimes offers those who go to Fortuna to join them, for their sake. The fact most Fortuna-bound travellers have smaller ships makes this offer impractical. 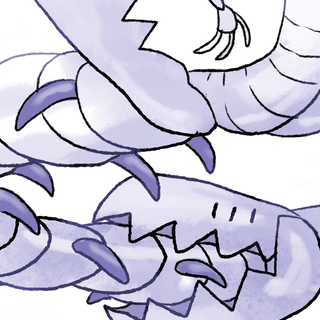 -Back to Legendary Menu-
< Ranjana
Red >