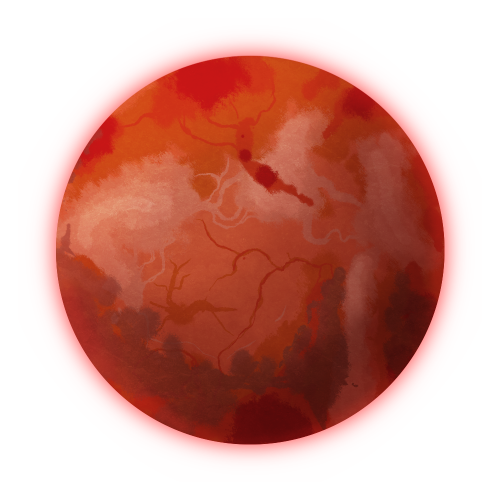 “You won't find a more wretched hive of scum and villainy in the universe, and I love it!” — Captain 'Brutal' Terry

A dusty, red, rock in space, that is quite an eyesore. The majority of the planet is covered in orange-red 'dune seas', functioning as the equivalent of oceans. Between these are patches of arid, rocky, badlands. Then there are the mines, or rather, the mostly abandoned rusting hulks of mining complexes, at times precariously perched aside the open pit of a former strip mine. The only reprieve from this, are the rare oases. It is dotted with ruined towns, not all of which are abandoned, but all of which, are dangerous, whether it be from hostile fauna, or from unscrupulous scofflaws.

The planet of Rangohl was an unassuming rock in space up until it was discovered to contain a windfall of valuable metals. It rapidly became a prosperous mining colony, attracting prospectors far and wide. But as is often the case with these things, eventually the boom went bust, coupled with the rather hostile fauna of the planet, encouraged a rather rapid cessation of mining activities on the planet. Now the mining company that facilitated this windfall was neither the most scrupulous, nor the most shy about using slaves, so when they departed the planet, they opted to leave behind their company of angry, disenfranchised, now ex-slaves, along with a whole heap of entirely peaceful, non-essential personal.

Things quickly fell apart, with the former slaves, many former convicts, banding together into bandit gangs, who harassed and oppressed basically everybody and anybody who couldn't contest it. Then, notorious aftik pirate, 'Brutal' Terry, came along, looking to settle down in his twilight years, and quickly took over a significant portion of the planet, including the former trade hub. Nowadays, things have settled down into a nice anarchic equilibrium, gangsters and pirates run the planet but many believe it could be worse, they could be working for a corporation.

Terrysburg: Formerly the main depot facilitating trade for the mines, when said mines went bust the town was quickly abandoned and left to the mercy of the disgruntled workforce. Shortly after that, notorious aftik pirate 'Brutal' Terry, came to town and decided to take over, ultimately renaming it after himself. The largest settlement on the planet, which is saying something, considering the place tops out at 30,000 on a good day. the town is a lawless slum.

Metaton: Or actually, 'Metalton, but nobody ever got around to fixing the sign, a colony town founded around one of the mines. When the the mines left, the good people at Metalton had nowhere to go, so they stayed, and promptly discovered how bad of an idea that was, but it was too late. One of the few major settlements still mostly populated by honest law-abiding people, although, living in the midst of rapacious bandits, tends to make one a little paranoid of outsiders.

Luxiuara: A largish, Oasis centered town of tribal geptad. The geptad here are descendants of a ship that crashed sometime in the past, and evidently reverted to pre-industrial tribalism in the intervening time. They're friendly enough, if rather stand-offish, and have taken to worshipping the local sand worms as deities, particularly the 'Great Sand Worm'.

Sand Worms: Ranghol is home to a species of sand worms, know creatively as... 'sand worms'. The massive beasts are endemic to the dune seas. Even the smallest creatures are several meters long, and legend persists of a 'Great Sand Worm' dozens, if not hundreds of kilometers long, and capable of swallowing even the largest of ships whole.

• Aside from the ruined towns and abandoned mines that mostly dot the badlands, the dune sea features a smattering of crashed wrecks from all sorts of times. Of course, one would have to brave the local fauna that inhabit the region, particularly, the infamous sand worms.

• Legends persist that some military organization established a secret research facility somewhere in the dune sea, most of the locals have long dismissed it, but rumors of lost, unknowable valuable, technology are not so easily dismissed by other sorts.