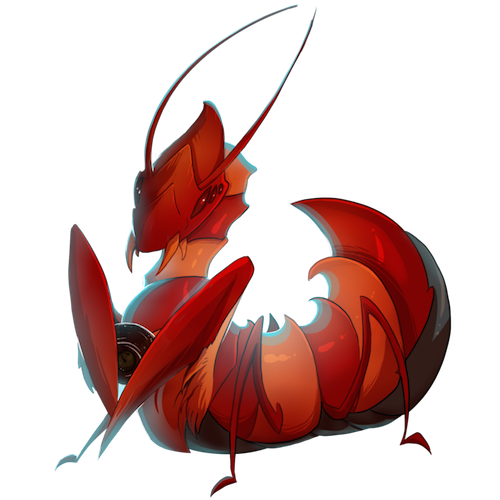 “And you thought blood hounds were bad, get a load of the claws on these guys!” — Tourist guide to the universe

Attack Method: Sweeper, hides until the last moment and then instant kills its prey.

The blood mantis has a total of 4 legs and 2 arms. It commonly uses its arms as legs when it is not getting ready for a strike. The blood mantis is covered in tough plates of carapace, which are hard to pierce with a typical knife. The lower back part of a blood mantis's abdomen, and back of its head is covered in a much softer deep black material. This soft area can easily be sliced open if one has the speed to get to those areas.

The blood mantis, despite having eyes cannot see anything more then 3 feet away from it and thus relies on its highly developed hearing to get a sense of where it is, and more importantly, were its next meal is. This has suggested that blood mantises have only just recently evolved to hunt outside of cave like environments. Blood mantises live in forests and jungles so they have the power to knock their claws on trees to echolocation. A wild blood mantis in an area where there are no trees will commonly bat at the air attempting to find something to help it sense around. Trained mantises will commonly have a bell around their neck or one of their arms so they are able to echolocation in any situation. If all else fails the blood mantis uses its two antennas to sense vibrations but these are very poorly developed and are mainly used to make sure nothing is on their backs.

The blood mantis's great hearing comes at a drawback, loud sounds can quickly overwhelm a mantis to varying results. An air horn blasted at a blood mantis could cause it to freeze up and back away, or worse, cause it to be sent in to a blind fury due to fear.

The blood mantis is an animal of pure rage. In the wild once they feel even a tang of hunger they become extremely violent. Many foolish people have mistaken mantises they've seen as guards and in circuses as an example that blood mantises are highly tame, and docile animals. The blood mantises at circuses are fed large amounts of food before every show to hopefully stop any outbreaks of anger. This normally works but there have been many incidents where blood mantises suddenly lash out and begin killing for no other reason then they had the power to.

Overall blood mantises do not show a heavy range of behavior that deviates from the norm.

Giant Cave Mantis: A large five foot mantis that is likely the ancestor of the blood mantis. They are just as aggressive and are considered even more dangerous as one will likely be unable to see them in time before they attack. The giant cave mantis is thankfully more rare than the blood mantis is.

Giant Sleepwalker: The giant sleepwalker was an attempt to breed a better guard. Through extreme amounts of genetic manipulation a blood mantis that was green, and also had paralyzing toxins in its claws was made. The sleepwalker is just as violent as its blood mantis brother, but the sleep walker does not instantly kill and eat its prey. Instead when a sleepwalker grabs a person the long sharp needle like hairs enters the person and paralyzes them, putting them into a sleep like state. The sleepwalker will then carry the person around until someone feeds it or until the person has expired.

• Blood mantises spend up to 2 hours of their day carefully cleaning themselves, which only worsens the incorrect idea that blood mantises are docile, as many are able to walk up to them while they are cleaning. In reality the blood mantis is likely cleaning up after eating and thus has little interest in hunting at the moment.

• While blood mantises can feel pain and pressure their senses are highly dulled, as such it is possible to jump on the back of a blood mantis without it reacting for hours as long as you avoid its antennas.