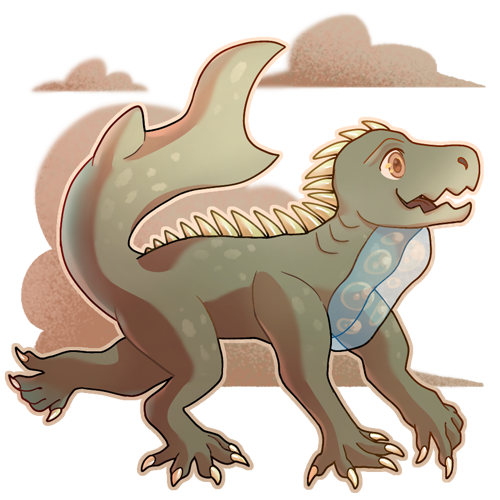 “Sure, I'm glad to be alive, but the face full of mouth water was kinda unnecessary.” — Astrid Goodwin, previously declared missing and assumed dead after vanishing during a desert hike

Blarks are small, quadrupedal creatures covered in scaly skin. This skin is most commonly found in shades of greens, sandy colors, and dusty browns. However, the colors are more vast in domestic breeds. These rarer colors include shades of ocean blue, lighter pinks, or even pale purples. Reds and oranges outside of albinism or erythrism have not been recorded.

The heads of blarks sport jaws filled with large, sharp teeth, as well as a pair of small horn-like protrusions above their eyes. Descending down their head, necks, and backs are a row of long spines which are typically darker than the rest of the body. On the sides of their neck are larger scales forming gill-like patterns which are an evolutionary leftovers.

To support life in areas with little water and even fewer forms of life, blarks have two main means of survival:

First of all, their tails, which can make up to 1/4 of their body weight, and 1/2 of their length, are rich in fat and act as a storage of energy. These tails can be dropped in a high-stress situation, and typically grow back in a few months' time. While considerable as a source of food, most tend to avoid the tails due to their overwhelmingly bitter taste.

Second to their fatty tails, blarks have a pouch in which they can carry a small amount of water. This pouch is not visible unless filled, and upon being filled, can be seen extending from the bottom of the chin and down the neck, and stopping around the chest. In the wild, this pouch is mostly used to keep young hydrated while remaining safe in their burrows. However, domesticated blarks are trained to use this water storage as a way to ensure that found missing individuals stay cool and hydrated. Though, some reject this offer, due to not wanting to drink water from the pouch of a small reptile.

The most well-known variety of blarks, being the domesticated kind, are first and foremost search-and-rescue animals. Picked specifically for their hardiness and generally pleasant demeanor, they're trained to keep those rescued calm and cared for until professional help can be called.

While well-trained blarks can avoid this issue, an underlying energetic nature can cause hyperactivity and unnecessary vocalization in younger or poorly trained blarks. The most common problems reported are a tendency to run around the house at late times in the day, excessive noise, and destructive behaviors. Due to their constant need for exercise, blarks are not a fit pet for those without either plenty of outdoor space, or the time to take their pet out multiple times a day to play or walk.

Besides their energetic and playful demeanor, blarks are pack animals by nature, and tend to become distressed when left to their own devices. They're shown to have some level of emotional intelligence, and have a tendency to spray distressed owners with water, due to an assumed link of poor emotions and a state of heat exhaustion.

Desert Crawlers: More commonly known as the wild variety, desert crawler blarks are most notably less colorful than their domestic brethren, and have a much smaller tail. Though they have evolved specifically to survive on the deserts of Nukotii, they have long since become prevalent on other planets due to importation. While typically fearful and cautious of other fauna and species, populations closer to tourist areas are noticeably more docile.

Crowned Blarks: While most commonly referred to as cave blarks, the crowned blark subspecies gets its name due to the extra set of cartilage spikes on their heads, forming a sort of crown-like arrangement of two spines on either side of the skull, above their pupilless eyes.

Though less notable than the namesake crown ther are other unqiue parts of this subspecies. The most important aspecs of this being the bioluminescence in the mouth, the bottoms of their paws, and strangely, in the liquid contained within their pouches. Cave blarks' water pouches are much more present than other varieties, stretching down to the stomach, and on the top of the tail. While this is assumed to be an adaptation to attract prey, crowned blarks are ultimately harmless, and actually rather timid. While there are a few known breeders of domestic crowned blarks, the natural population of this subspecies is dwindling due to the exotic pet trade.

Rescue Built: While all blarks have water pouches and fat-storing tails, domestic blarks have been bred to have these qualities increased drastically. This allows some blarks to go on much longer than typical rescue groups, and search a larger area. Since their widespread usage, the fatality of missing person cases in desert areas has dropped significantly.

• Blark tails, while incredibly bitter, are sought as a high-price meat by those who can appreciate the acquired taste.

• Blark young are called pups, and are typically hatched in clutches of four.

• Despite their name, blark vocalizations tend to sound more like yips than barks.