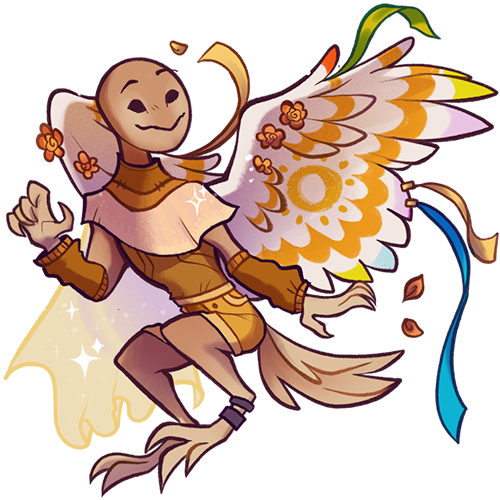 “YOU’RE ABOUT TO BE NONEXISTENT!” — Sir Cuddletiddleydinks the Fifth Dragonlaugher

Attack Method: Emoza use their teeth in addition to their knife-sharp fingers, often using their wings both offensive and defensively.

[Loyal] Neutral trait
This character is loyal to whoever they are aligned with and it would take a lot to ever drag them away from that.
[Plant Communer] Positive trait
Individual has some ability to be able to communicate with plants, and is naturally charismatic to them. Individual may have some physical quantity that denotes them as "floral patterned", whether having a flower patterned attire, or birthmark, or being a plant themselves.
[Dependent] Negative trait
This character is dependent on a person, object, or action. This character commonly will become distressed if what they are dependent on leaves or stops. This character might become useless and be unwilling to work once they reach this state.

Emoza believe that the plants around them have seperate, important lives and respect them a great deal.

Emoza are commonly lanky with long arms and legs, and are able to grow up to seven feet tall. It is difficult for an emoza to be much more than chubby as they burn energy quickly, and when it is needed, much of it is dedicated to regrowing limbs.

There is no gender dimorphism to speak of, and any emoza can lay up to forty eggs at a time. Therefore, pronouns are chosen based on personal preference. While their assortment of avian features are only constant with their possession of wings, emoza are otherwise plain. They have two eyes and a single mouth filled with sharp teeth, along with sharp steel-like fingers. The eyes are strictly a single primary color and variations can only be seen in hybrids. Their bodies come in a single color gradient that is darkest around their chest and lightest at their hands and feet. This gradient can be any color from gray to a neon pink, but darker, neutral colors are the most common. Albinism and other skin-related colorations are possible, though rare. Piebaldism makes the gradient of an emoza's color spot randomly across themselves.

Every emoza has two large wings sprouting from their back that can come in a variety of shapes and styles. These wings are always a very light, almost white, color, and always stylized in some way. Examples of how they can be decorated include dying, piercings, ribbons, beads, or even paint. The only emoza that don't mark their wings in some way are members of royalty.

Other than wings, there is a scattering of other traits that not every emoza is guaranteed to have. Tail feathers are the most common of them, with feathers on the back of legs or arms coming just after. The possibility of raptor-like feet or claws are much slimmer. In the case of every feather mutation, they can come in as many shapes as wings can and are always the same natural color as them. Due to them being less common, marking these feathers is not mandatory, but is still encouraged.

As chicks, emoza are only a few inches tall and covered in soft down. This down starts to fall out once the chick is old enough to start functioning and moving about on it’s own, and disappears fully once the emoza is thirty years old. At around fifty, an emoza is considered a full adult. However, one in ten emoza never lose their chest down and are viewed as more immature and childish than others due to the association of such feathers.

Emoza walk around constantly promoting a certain emotion, and their behaviors and personalities are heavily based on such. An emoza that promotes grief will approach people with a very heavy walk and a dragging, slow voice. They will constantly frown or look ready to cry and their wings may never fly unless needed. An emoza that promotes excitement will often walk around peppily and always tell people to cheer up, ready to take off at any moment.

The emotion an emoza promotes is often one they were influenced by for the majority of their childhood. Their emotion is decided on their own accord as they grow older but this in no way means that a promoted emotion is set in stone. A drastic event or the emoza simply changing as a person can lead to an emoza deciding to switch their promoted emotion. Often this switch happens at least once, but it is possible for an emoza to go through their entire life promoting the same thing.

Emoza have an odd stance towards love, seeing it with the idea of soulmates. There is an "other half" of an emoza out there, either platonic, romantic, familial, or even a simple love for a food or scene, such as an aesthetic. If there's a "soulmate au" out there, there's an emoza who full-heartedly believes in it. As it’s possible to have more than one type of soulmate at a time but not two of the same type if it regards to people, there is a fierce debate over if an emoza's soulmate is a belief rather than a genetic trait. In addition, there are some emoza who constantly lose and gain soulmates, and can even have the same kind of soulmate at a time. On the other hand, even extremely young children raised off planet show similar behaviors towards love, the only difference being they lack a name for this feeling.

Nearly every soulmate is extremely important to an emoza and family is deemed the most important above all else. It is extremely difficult for an emoza to turn against someone they care about unless given significant reason to do so.

In fact, soulmates are so important to an emoza that it is not uncommon to see certain patterns of markings on wings to represent this. These markings are made with dye or paint, and are indications of generic types of soulmates. The bigger the feather the marking is placed on, the more important the soulmate is to the emoza. Colors are used to represent which type of soulmate, but there's no strict definition between these and as such, the type of soulmate can be confused between emoza who give these colors different definitions. An orange primary feather may mean friendship for one emoza, and a sworn rival for another.

As an emoza's wings cannot successfully grow back, their wings are treated with special care. An arm can always regrow or be replaced with a prosthetic, but there is no replacement for an emoza's wings that could give them the exact same experience of flight they had before. Many have tried and failed, but nothing can truly replace the original wing an emoza is given. To lose their wings is to lose their entire identity and for many is worse than death.

When an emoza dies, they are buried at the roots of the trees of Chyta, based on the varying belief that the whispering plants are or were alive. Some even go so far as to say the plants talk to them in legible ways. Whether this means they were spirits, ancestors, gods, magical guardians or otherwise is not concrete. The one thing for certain is that plants in general emoza culture are significant and should be taken care of. This comes to a point where even the largest of their cities are integrated into the forests of their home and are built as eco-friendly as possible.

While a long, long, long, long, time ago the duyami and emoza were the same, they split on the evolutionary tree and grew to make their own civilizations. A war constantly threatened between them as the two developed, the emoza taking to higher ground and learning to live amongst the trees.

A ruler was declared during their development of society, and today their royalty can be recognized with a lack of decorated wings.

The emoza have been known to take their need for a monarch seriously, demanding that at least one person at a time be ruler. It is said that when this did not happen, the planet was thrown into anarchy and there was a civil war between the emoza, and that even the planet itself was angry.

The current ruler of the emoza is a queen in her fifties who's said to have gained the throne during a period of tragedy. The majority of her family was killed, leaving the queen to mourn the lost members.

Children are plentiful and easy to make for an emoza, and thus it is easy for there to be too many at a time. Once this was an evolutionary advantage, as their young can die easily and it meant the more chicks there were, the more likely at least one was to survive. Now, overpopulation is a risk and not every emoza wants to be or is capable of parenting twenty or more children at a time.

Thus, an adoption system was put in place so that these issues would be more controlled. Any emoza can hand in their own chicks to the system as long as they are no older than twenty. Citizens of Chyta, not simply emoza, can adopt up to ten chicks as long as they have no history of abuse or criminal activity. Anyone from off-planet must have been on-planet for at least a year and have no history of abuse, criminal activity, and dangerous occupation. They may adopt up to six chicks.

Fast Regeneration: Emoza heal much quicker than expected. Deep scratches may heal in hours, while a broken arm might heal in less than a week. An entire leg can be regrown in a month. Due to this fast pace, scars are common and it is easy for something to heal the wrong way. Unfortunately, emoza cannot grow back their wings when removed.

• Emoza names are most often related to birds, such as bird constellations, wing anatomy, etc, but other names are not uncommon.

• There is a mention of an emoza that promotes an emotion that is assumed to be cheerfulness, but if anyone asks an emoza about them the emoza will always try to change the topic or escape the conversation.