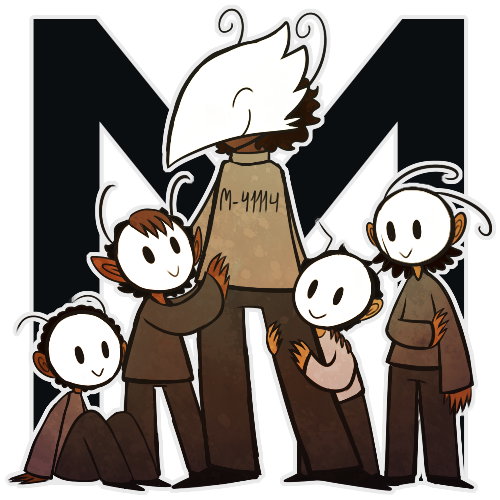 “Notail Fact: Did you know? A parent never forgets a single one of their children. Not one.” — =)

Class rank: High Rank
Population: 1% of total notail population
Likes: Children, Babying others, Control, Freaking out adults
Dislikes: Bad children, Threats near their camps,
Contributions: One of the oldest notail classes, the M-class has been taking care of notail children for as long as notails have recorded their history. M-classes make sure that every notail gets a fine start in life, or are tossed away for being "broken."

[Affectionate] Neutral trait
This character cares nothing more then to watch out for and take care of other characters. They commonly end up the "parent" of most group and do their best to keep everyone in high spirits. Sadly some characters may not enjoy this at all or this character might mismanage their own personal time due to caring for others.
[Observant] Positive trait
This character notices things far quicker than most other types of characters. They are more likely to make observations about hidden passageways or certain special objects. They overall make better judgements than others.
[Unnerving] Negative trait
This character commonly puts anyone around them on edge by presence alone. Everyday they are with someone, the sanity of the person goes slightly down.

Every M-class is born in the same area they will die. Instead of questing with the other children, young M-classes will follow adult M-classes learning the ways of their job from their elders, only breaking away to head into the woods. M-classes quickly learn that they're one of the top bosses of the notail world, even if they nearly never leave their settlement.

Once reaching adulthood M-classes become fulltime parental figures to other notails, but the time they spend with each notail is scarce. M-classes spend a few short hours each week with each child, caring for around 30 to 50 children depending on the year. M-classes must make sure that children are on track with their quests, as well are in physical and mental shape. If a child is failing these things even with the help of the M-class the child might be considered a dud and shipped off to a lab with other D-classes.

Due to being raised by M-classes, many adult notails are quick to bow their heads and let M-classes get what they want in the rare times they decide to head to adult civilization. Even after many years have passed, an M-class is able to remember an ex-child of theirs just by their mental signals. M-classes will dispense sweet words, that admittedly scare other classes more than not to every notail that they speak to, but in the rare cases they meet an ex-child of theirs, it's best to flee. If unable to get away they are sure to affectionally hug the notail, following them around for hours and asking them how their life has been going.

Questing M: A questing M-class is an M-class who instead of caring for children directly, instead gives out quests, and run the small rest stops in the woods. These M-classes are quick graders, and they have to be, after all, there's about one questing M-class per 1000 children, and a lot of quests to check off. These M-classes can get temperamental as they're constantly on the move, but they attempt to keep at worst a passive aggressive tone with children. With adults on the other hand? Curses, lots of them.

Baby's M-class: This M-class is the M-class that picks up the children from the Breeder classes and watches over infants until they're just a bit over three years old. One of these M-classes watches over an extremely large amount of infants, their main job being to pick out duds or abominations that may have been missed by B-classes. These M-classes are extremely aggressive towards any adult notail that isn't an M or B-class, and any other species. Even small animals need to beware around this M-class, nothing will harm their babies.

Expanded range: M-classes have an expanded antenna range of about 200 feet. They use this to keep track of every child they are currently watching at the time and can tell when they're wondering too far. To adults, the "pinging" of an M-class is extremely imposing and causes every class but most O, M, C, and A classes to become more docile and shy.

• The term matriarch class is fairly obsolete, coming from a time long passed. Despite their naming, there is an even split between the sexes like every notail class. The name still sticks around today, possibly because notails don't want to go through all the trouble of shifting one letter class and thus having to rearrange all of them in a domino effect.

• M-classes are known for many of them having masks that look like the heads of birds. M-classes have a higher rate of notails with black masks instead of white than the common notail class.

• It is confirmed that some O-classes are still affected by an M-classes appearance. Any notails who have never been raised by an M-class aren't affected though as they do not hold the same relationship with the "pinging" and authority.