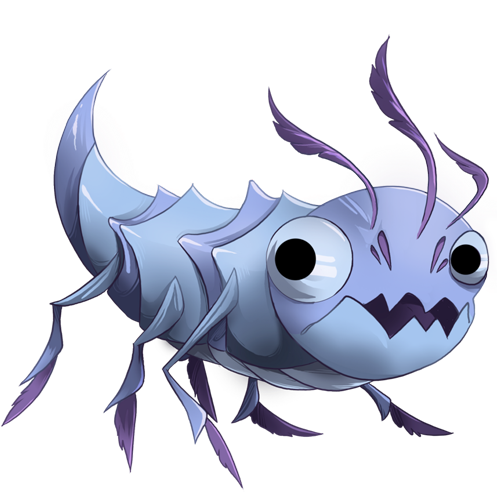 “Some people like felixcities, but I'm more of a caborhund person, they're smart, loyal, and fun to boot.” — Caborhund enthusiast

Attack Method: Bite and thrash until the target is disabled or dead.

A small arthropod that about two feet high and around three and a half feet long at the longest. The caborhund's body is divided into three segments, which feature overlapping carapace plates, and end with a prominent upswing at the hind-quarters. Caborhunds have six insectoid legs, attached in pairs off the side of each segment.

Most of the caborhund's size is dominated by it's prodigious head, which takes up around a third or a fourth of the creature's total size. This head is largely dominated by it's large, white eyes, which are all but completely blind. It's head features a large toothy maw that often flaps lazily and fopishly as the caborhund pants expectantly, and a quartet of nostrils at around the exact center of it's head.

Male and female caborhunds are largely distinguished by their head; males have a prominent horn rising from their forehead, flanked by a pair of antenna; females have a trio of antenna, the central one being longer than the other.

Caborhunds are, as noted, mostly blind, and rely more on their sense of smell and hearing, but most especially, their sense of touch. Caborhunds are well attuned to the vibrations in the ground, and can pinpoint all but the smallest objects falling upon it.

Caborhunds are excitable and exuberant creatures that are easily driven into a fluster of energy and excitement. When presented with something that catches their ear they pursue it with a impressive zeal and determination, not resting for hours until they find what they're after or they get tired and wander off.

The animals are consumate hunters, using their highly attuned senses to pinpoint the exact location of just about anything. In spite of this they have a reputation for being slightly dumb, because of their tendency to chase after anything and everything, but one can be assured that they will find just about anything that touches the ground, guaranteed.

Friendly and trusting to a fault, Caborhunds have a reputation for being "dumb", not entirely undeserved but not entirely true either. They are easy to get along with and love almost unconditionally.

Sparthund: Sometimes called the 'Feral Caborhund', these are a subspecies that evolved from caborhunds that got loose in the wild. More aggressive and territorial than their domestic cousins, they are larger, "spinier", a great deal meaner, and should be approached with caution.

Pischund: A genetically engineered variety of caborhund designed for the ocean market. They come in various shades of blue-gray, and their legs as well as any horns replaced with fins.

Tremorsense: Caborhunds have highly attuned senses of touch, and can detect and track minute vibrations in the ground for several hundred feet.

• Caborhunds are very popular pets due to their friendly, trusting natures, and usefulness as hunting animals.

• Caborhunds will put just about anything in their mouths, whether its edible or not, whether its good for them or not.

-Back to Fauna Menu-
< Butterfly
Camnequoi >