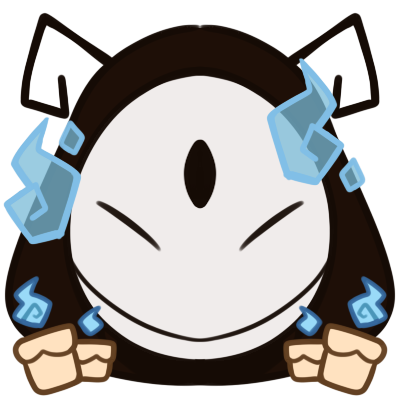 Job: Notail Leader of the C-class, M-class, and U-class
Likes: You, Everything about you, The inside of your living room, Your bedroom too, The info on your computer is a delight, Nice internet history
Dislikes: Himself, Mainly pictures of himself
Notable contributions: O-9 is the leader of the C-arpenter, M-atriarch, and U-ndercover classes. O-9 keeps track of inner notail society and making sure everything runs smoothly at any cost. O-9 loves all notails very much and wants to make sure everyone is taken care of, except those who get in his way. O-9 also runs spying operations on other species.

Describing what O-9 looks like is easy when one sees him, but that's just the issue, spotting O-9, even if he's in the same room as you, can be quite a challenge. O-9 does not present himself to people he doesn't actively want to see him. Photos of O-9 are scarce, nearly all of them extremely blurred as if someone was attempting to falsify evidence of O-9's existence. Thankfully written words and artist depictions cannot run away.

O-9 is an extremely abnormally tall notail, reaching seven feet. O-9's form is hidden by his long dark colored cloak. Four arms, two too many, are what O-9 possesses. All of the arms are fully formed and functional with no loss to control. What little of O-9's skin that can be seen is a dark brown, and while O-9's hair cannot be normally seen reports have said that it's short and black. O-9's antennas bend backwards, before bending downwards, then forwards, and then finally upwards, creating a spiral of straight lines.

O-9's mask is a plain white mask with a large smile, two closed eyes, and a dot in the middle between them. O-9 always makes a ^v^ face.

A rather shifty character, O-9 stands out in crowd, or disappears in even an empty room depending on what he wants. His mutation gives him an extremely flexible spine, making him unnerving to watch in motion, bending in ways far too unnatural and fitting into spaces he shouldn't be able to. This as well as O-9's normally constant silence and stare that seems to bore into the minds of others causes O-9 to be a rather unnerving sight to spot.

When O-9 has started tracking a person he bugs every area the person goes to, even entering their house to set up cameras. A person could be watched for their whole lives without knowing. O-9 obsessively watches their subjects, paying attention to every detail. If O-9 finds something wrong he will move from distant admiration to appearing in one's house, a sudden invasion.

The thing most people remember about the appearance of O-9 is that all technology that works on electricity stops working. Darkness takes over as the lights turn off.

O-9 carries around a jammer that disrupts equipment in a small area as O-9 hates nothing more than to be videotaped, or have his picture taken. If anyone takes out a camera he will move quickly to get out of the way if it is active and become aggressive, some remark that just blinking can cause one to miss his movement.

Once O-9 finds a person he wants to interact with he will go from his unmoving and silent self to a very loving and parental type of person. O-9 will constantly attempt to drag the person to him to hug and pet the person while telling them "what a sweet child they are." O-9 does this regardless of what intentions he came into the building with.

Once the person is in his hands, one of three things will happen. He will continue his loving speech, and inform the person that he wishes to help the person; he will handcuff the person, speaking about how "their sweetie" is sadly on the wrong path; or O-9 will inject poison into them, or even snap their neck for a quick kill. Even with the latter O-9 will call the person his "poor child."

Creepy yet friendly, O-9 watches people go about their business, day in and day out. Sometimes O-9 spots a person who shows sign of trouble, isn't eating correctly, not wanting to get out of bed or any other signs of issue. Sometimes O-9 just sends an officer to check on the person, but other times O-9 meets the person personally. People have woken up many times to O-9 hovering over them, leaning down and whispering to them "You haven't been eating correctly."

In a way, all notails are being taken care of by O-9. He watches part of the population at all time to locate troubled areas and to keep track of the general habits of notails day in and day out. If he finds that large amount of notails are having issues he will spring to action to figure out how to fix the issue and inform the proper channels about it. When a community project needs to be built such as a highway he will have his officers inform people living in the way to move, and give them the resources to do so. Anyone who refuses will be removed.

He also keeps track of the O-classes at all time to make sure they're all doing fine. The O-classes are rather lukewarm on O-9 visiting them to show affection. O-9 has a large amount of free time as nearly none of the notail planets experience any major issues and the notails haven't colonized a purely notail planet since the 12th planet. Very rarely O-9 will be told to set up base on a non notail planet to monitor and upkeep that planet's city and social building. Once the job has been done O-9 returns to his home and pesters random notails once again.

While O-9 loves to grab, hug, take pictures, watch and pick up other notails, he himself hates being touched or watched. If touched when he's not showing affection he will grab the person's arm and twist it back without saying anything, letting go when he feels they have learned their lesson. O-9's dislike of being touched likely comes from his mutations which while useful, makes him very fragile. A successful tackle hug in the wrong place could damage his back.

This is why despite being a former M-class O-9 detests children. Children are too unpredictable and randomly want affection even when he does not wish to give it. Adults on the other hand shy away from their emotions making them lovely targets for O-9's care.

O-9 had four arms from the moment he was born. After being labeled a possible abomination, though unlikely, O-9 was allowed to live out his childhood as a M-atriarch class. Thankfully for O-9 he never turned out to be an abomination, just a child with a rather aggressive mutated strain. As a young M-class O-9 was expected to help take care of children with the adults to learn from them.

It was then that O-9 learned how much he feared children. Children would kick and scream, even when he was calm and trying to be kind to them. Due to the mutations one bad shove or hit from child, could injury him so badly it would be him who needed to be taken care of for weeks. Due to this he didn't learn the ways of being a M-atriarch class as well as he should have. By the time he got to the woods he learned two talents, being fast and being out of sight. He avoided other children, tracked their daily routines and stole what he needed.

Still the M-class in him would feel bad for the people he watched. If one of them ended up sick he appear and take care of them, stealing more food from the others to make sure the one who was helpless and near death got care. By the time he was able to leave the woods he had a small group of notails who would willingly leave offerings of food to their eyes in the trees who would whisper down info from above.

O-9 was sent back to the place he was born to get his final training as a M-atriarch class notail and to take his place in his job. O-9 didn't survive one year there, being fired for constant injuries and unwillingness to interact with many of the children.

Being a fired notail means one gets just the minimum to live. Food, water, and a roof. Notails without a job quickly tend to rust away mentally. After just a few weeks of being jobless, O-9 took up a terrifying hobby for the entire neighborhood around him. He watched people. His M-class brain being bred to keep track of many people and their routines everyday. People would wake up to their furniture rearranged in stylish and more convenient ways. Notails stuck in a deep emotional rut would wake up with notes in their beds detailing ways to help, and numbers to doctors nearby.

The whole neighborhood was terrified, though significantly improved in most ways. O-9 moved once he got bored and would do the same again, this would go on for years until one day O-9 by chance ended up in the same area as the O-9 at the time. He first tried to ignore such an important fact and went about improving things. But one day he couldn't handle himself and managed to get in, reading classified info and making notes of improvements.

When the current O-9 came back, he surprised him and grabbed him. Not willing to be caught murder was the only outcome.

O-9 attempted to cover up everything as much as possible in fear of being captured and killed but eventually was found and made the new O-9 for showing he could improve areas better than the other.

With O-9's new found power he could improve the lives of all notails. A camera in every house.

Electromagnetic Pulse: O-9 carries around a device that disables electronics so that he may safely meet new notails with no chance of getting his picture taken. O-9 is very alert at all times and is exceptional at noticing and dodging the gazes of cameras, causing many shots to look like a blur.

• O-9 is extremely fond of teaching notails new skills, even if notails aren't too appreciative of him coming out of a closet silently and grabbing them before they can even process what's happening and taking them to cooking lessons.

• Nothing shocks O-9. He sees into people's homes, offices, and in just about any other place on a constant basis. There's nothing he hasn't seen. 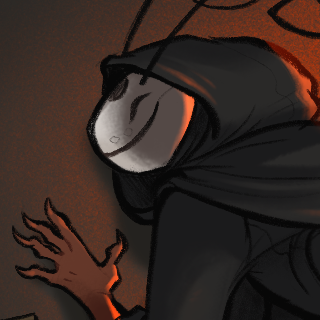 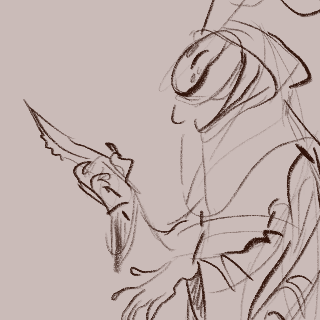 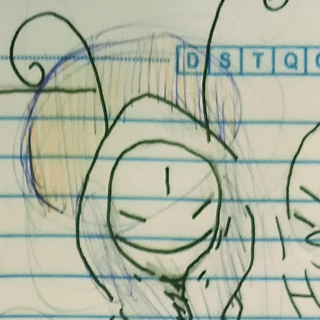