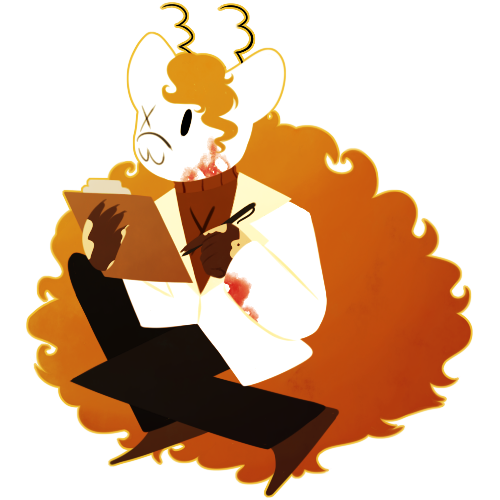 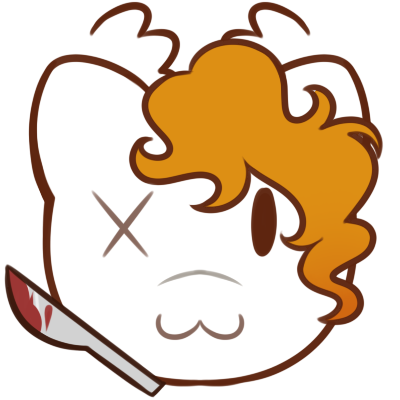 X is, to put it simply, hard to miss. Tall and broad for a notail, they easily stand out by virtue of that alone, and their long curly hair only adds to this. This doesn't stop when they open their mouth, however, as they seem insistent on speaking in a noticeable tourist accent at all times.

Their skin is very dark, and splotches on their fingers seem to indicate that they have vitiligo, but confirming this is difficult; they almost exclusively wear clothing that covers nearly all of their body no matter how high the temperature is, such as a lab coat over a turtleneck sweater in the midst of a heat wave. Whether this is deliberate is uncertain - but knowing them, it is just as likely that no thought whatsoever goes into the decision at all.

Though X appears quite sturdy-looking, considering how large they are, observing them at length indicated that this is not in fact the case. While they should easily be able to handle quite a few hits, it seems a previous one has taken its toll on them. An old injury can be seen plaguing X; occasionally, if they gesture too emphatically or cross a room too enthusiastically, they will hunch over slightly or their breath will hitch for a moment. The pain is clearly enough to force them to pause in their actions, and means they don't tend to move too rapidly most of the time unless they forget themself. Of course, they forget themself often - which likely only exacerbates the old wound even further.

Unlike many X-classes, X doesn't hide their letter no matter the situation, and they typically have it displayed prominently somewhere on their clothes regardless of what they're wearing. When asked why they don't display their number as well, X's only response is, "It's for the aesthetic. Xw0"

X's mask is that of a white rodent-like creature with a missing eye, and they always make a Xw0 face.

A good way to describe X is simply "eccentric". They're incredibly absentminded, constantly forgetting paperwork, instruments, names, what they did that morning, etc, and frequently seem to briefly stare off into space before blurting out something unrelated to the conversation at hand that they, nonetheless, just remembered, and running off to go deal with whatever it is.

No matter how important they may be, X will nevertheless often misplace and mix up their items, thoughts, and words, usually in the same breath. It's not at all uncommon to hear X suggest someone place "the fridge in them tranquilisers" or asking someone to pass them a "whatchamacallit". Luckily - or perhaps unluckily - most X-classes are used to them and know what they actually mean.

Despite their oddities, X is far from unfriendly, and is extremely supportive of and encouraging towards those around them. They don't hesitate to offer a sympathetic ear if someone needs to talk, or leaving complimentary notes for someone who would prefer to not. They may also attempt assistance by printing out and hanging up a positive poster pertaining to a person's interests. Overall, they just want everyone to believe in themselves as much as X believes in them!

Possibly as part of this, X also seems to enjoy happy endings, and when not working can sometimes be seen flipping through a romance novel or magazine. It's quite easy to tell whether the conclusion of the story was a pleasant one or not, as they won't hesitate to state that they are "dying from real complicated feelings, Xw0" to anyone in earshot should it end tragically, before proceeding to go into excruciating depth on the matter. For anyone who doesn't want to hear about X's latest read, happy endings are far preferable - if it is, they simply put the book away with a content little sigh.

Forgetful, chatty, and sweet, it's very easy for a person to become so distracted by their odd behavior that one forgets exactly who they're speaking to.

X loves aliens. X loves aliens oh so very much. One should not allow this to convince them X is harmless, or unlike other X-classes, because that couldn't be further from the truth.

X, like all X-classes, is devoted to the study of alien life through whatever means necessary, even when these means include manipulation and trickery and horribly unethical experiments. X, strangely, is completely convinced that everything they do, every order they've given, is for the sake of helping the aliens they're responsible for slaughtering; if a few have to die for notails to understand the species, then so be it, for can't they do so much good as long as they know how these things work? Can't this information help treat so many previously thought incurable diseases?

To X, any cruel command, and any horrific action, is worth this end. After all, those seeking to pluck a rose must be willing to prick a finger.

X was born an overall normal member of their class despite their unusual size, and nothing about their early childhood is of any particular note. Though X's experience through The Woods mostly seems much the same, again, as any other X-class, there is a recorded exception: the starter that they picked - the high-endurance cratic - ended up dead early on in their journey. Thus, X spent the better part of their 5 year trip within the forest doing things by themself, without a capture creature's assistance.

Eventually, X made their way out of the forest, was given more rigorous training, and then assigned to work off planet. This first assignment was simple; they were really only there to observe the senior X-classes at work, so that they themself could learn their future duties in a more hands-on setting. However, tragedy struck when a large local beast attacked their group, killing some, scattering the rest, and severely wounding X.

X lay there for what they say felt like days. They had little hope for rescue; they claim to have been, in their youth, uncommonly hardy for a notail, and if their injuries could immobilize them despite that, what hope was there for the others? They didn't want to give up, but it very much so appeared as though they had no other choice.

Then, a miracle happened. They were found by locals - presumably ones who had yet to learn the horror that notails truly were - and taken to a hospital to get their wounds treated, and although their recovery was slow - a combination of a bad injury and the locals' unfamiliarity with notail anatomy didn't help the process - X eventually became well enough to contact notail authorities and go home when they otherwise would have died.

X never forgot this, and it influences much of how they view non-notails to this day. Many would assume this experience might cause them to no longer wish harm upon aliens, but it in fact had the opposite effect. X, despite everything, was still an X-class, and so their response was to become even more determined to learn more about other species, no matter what they had to do to obtain that information. Data is valuable, and X knew so many problems could be solved as long as they had more of it. Everything would be alright; it was, in the end, happy endings that X loved. They have never had objections to the sad middles needed to get there.

At the encouragement of their friends, X eventually submitted an application for the position of X-class leader, but thought little of it. The X-10 at the time, after all, was incredibly good at their job. In time, X completely forgot about having applied altogether.

But something unusual happened. X-10 was revealed to have developed the X-class illness; they were squirreling away test subject after test subject in their home, rigorously adjusting X-class plans to avoid damaging their species, and overall becoming horribly protective of them. Again, X thought little of it - sure, it was kind of weird to just keep a bunch of people in your house against their will, but this illness was common among X-classes and they were certain X-10 would recover soon after being sent to church.

Instead, when their mandatory treatment time was up, X-10 simply handed in their job, their title, and their very identity as a notail, and left their society altogether. And so, applications for the position of X-10 were looked at.

X-10, as leadership roles tend to be, was a highly coveted position; there were quite a few X-classes who sent in applications for the job. In the end, however, X was the only one who stood out as a fantastic, as opposed to decent, worker like the other applicants were.

Thus, X became X-10 from something they didn't even remember doing - not that they were complaining about the promotion! The first thing they did upon receiving the good news was decide to call themself X.

Like all class leaders, X is cloned and replaced upon death as long as they continue to demonstrate that they are the best person for the job.

Love Yourself! I Love You!: X might not be able to sway people's suspicious hearts with a whisper and a smile, but their shining positivity and sincerity tends to wriggle them into others' hearts nonetheless. It's hard to hate someone who for all intents and purposes is a big cuddly teddy bear, after all.

Ever since they became the X-class leader, the morale of those that work under them has significantly improved; something that would surely also spread to most anyone who spent a notable period of time around them.

• X has often been known to give romantic advice to their coworkers and friends, even going so far as to set some of them up on a date. However, they never do this to strangers, and always asks permission from both parties first.

• Xena X. Xanax, author of many popular romance novels with X-class love interests, is rumored to be the same person as X, as no one has ever seen the mysterious novelist in person. X themself is silent on the matter.

• Though X has only ever bought a toasty-coloured mallon as their capture creature, they also have a tailmic in addition to it. This tailmic is of the mostly white variety, with a black head top that has a distorted marking. X claims that it just started following them one day, which isn't that strange considering how much they talk to objects around them. The mallon is known as Cinnamon Galloway, or Cinni Golly, while the tailmic is known as Juliet. The species that aided X was eventually wiped out. 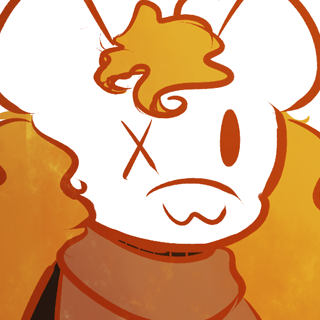