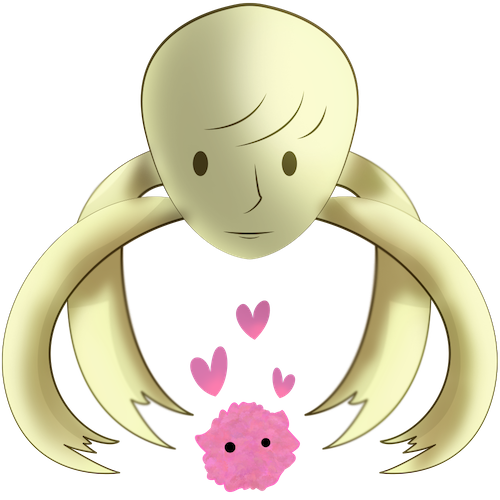 Attack Method: Get up close and "tickles" the enemy to death. If stealth approach isn't feasible, then will use waves upon waves of strategically timed and grouped massed charges to close distance.

[Devoted] Neutral trait
This character is loyal to whoever they are aligned with and it would take a lot to ever drag them away from that.
[Protective] Positive trait
This character is likely to know when things are going wrong with anyone they're protecting / anyone on their team. A protective character will defend them whenever possible. Endurance obtains a slight raise when the protective trait is active.
[Doesn't know when to give up] Negative trait
This character is too confident in their abilities and is not realistic about how dangerous or challenging something may be. They may take on tasks they cannot do, or put themselves or their team in dangerous situations because they think they can handle it.

There are three main faiths; following The Great Jupette, the True Spike God, and The One He Shouldn't Have Killed, respectively. If there is any animosity, any issue between these faiths, it has yet to be found, and, likely, doesn't exist at all.

Gods: The Great Jupette, The True Spike God, The One He Shouldn't Have Killed

A largely balloon-like species, jupettes have an ovoid body that is largely hollow. At the bottom is the mouth, surrounded by three to five tube-like arms, each tipped with five sharp, venomous, claws. These arms only support the body while it's "sitting", staying limp if not being used while it is in flight. They defend themselves with rapid lightly brushing the skin of their attacker with their claws, depositing venom in very fine surface abrasions.

The venom forces a gargalesis, or gargalesis-esqe, sensation in the victim, complete with rhythmical, often audible contractions of the diaphragm and/or other parts of the respiratory system. In other words: They tickle their enemies, and that enemy WILL laugh, no matter how hard they try to breathe. Jupette has an intuitive sense of how much venom is needed to kill most things they encounter. In extreme situations, one can thrust a whole hand into a threat. However, this will irreversibly destroy its claws, which will likely result in massive blood loss, and their death.

A simple species, jupettes are content to float around, taking in their surrounding as they head to their destination. As weightless in emotion as they are in mass, most only feel very strongly about things that are cute, adoring them and wishing for them to live happily, prosperously, and safely.

They have proved willing to take a drastic action to ensure these actions, as the Aftik Betterment League attacks, the Metaparxi Freedom Society attacks, the Gong-an De-notailication Front attacks, the "6-inch 'Ello Gecko w/ guitar figurine" riots , and most of the jupettekind's relations with cuteyekind. It's safe to presume that this relationship to the cuteyes is behind the large amount of jupette that work as hospital orderlies to this day.

Jupettes proclivity towards non-verbal communication is well liked among those who have heard their "verbal" communications, as they speak in high-pitched squeals that sound vaguely like they are saying "E" repeatedly.

The earlier sapient species the jupette call "codiles" were engaged in a predator/prey relationship with the primitive ancestors of the jupette. This would escalate into a bitter war, where the codiles invented new ways to hunt the proto-jupette, and the proto-jupette developed means for breaking through their assaults. Legend states that this culminated with a lines of massive, zeppelin-sized jupettes leading charges past yards of spiked mines, missile strikes, cyborg monstrosities, and codiles ascended to the point of being called Spike Gods.

The absence of the more fantastical elements of these legends today suggest these legends are an exaggeration of the true conflict between these two natural enemies. This suddenly ended when the codiles mysteriously vanished. It is still unknown how this happened, although the extra-dimensional spike research project, which was at its apex at the time of the disappearance, is very suspect. Without the threat of the codiles, the proto-jupette settled down, and over time evolved into the jupettes known today. Jupettes found the ruins of their old nemesis, and the codiles became a cultural sensation, beloved by the descendants of those they hunted down zealously.

In 1283, first contact was made. For the most part the jupette were indifferent, and let the visitors freely enjoy the planet's natural wonder, so long as they didn't touch any of the numerous artifacts left behind by the codile, which had since been collected and enshrined in their honor.

Then one wealthy family arrived with the intent to vacation there, bringing along their geckrechaun pet. The riots over the custody of this cute was worse then any codile baby book ever caused. The local law enforcement was unprepared, as the chances of anything else being a cute were a million to one, or so it was thought. This revelation of cuteness beyond their world spurred a fevered interest in traveling beyond the stars, and, in turn started discussions over purchasing a ship for an expedition to the stars for the cute. These discussions ended once the romans arrived with cheaper ships, allowing jupette to privately wander the stars to looking for cutes to cherish and protect.

Apteryx is a world with a variety of different biomes and environments, a large selection of ruins from an earlier sapient species the jupette call "codiles", and the battlefields where codiles hunted down the primitive ancestors of the jupette, while the the proto-jupette charged to break through and attacked their predators.

Ballast Health: s a jupette takes damage, they shed off the damaged layers of their skin. Thus they become lighter and faster the closer they to death.

Ex: As a jupette takes damage, they gain agility based on how much of their health they have remaining.

• There is a persistent belief that jupettes are behind a large number of kidnappings. Rest assured, only a few have been involved.

• Oddly, jupette young do not look cute, looking more like a disturbing flesh web. Jupettes do not have any protective instincts towards them. Their interest in cutes and their protection is cultural.

• The Extinction Era divided jupettekind, as one side felt that they should protect the living, and take vengeance on the occraft for having made the undead cutes fight them. The other side disagreed, and felt that it was the undead cutes that needed protection from the other combatants. Any living cutes would get brought back as undead, and everything would be alright. All the ones that sided with the undead were hunted down after the war, and executed for their crimes.