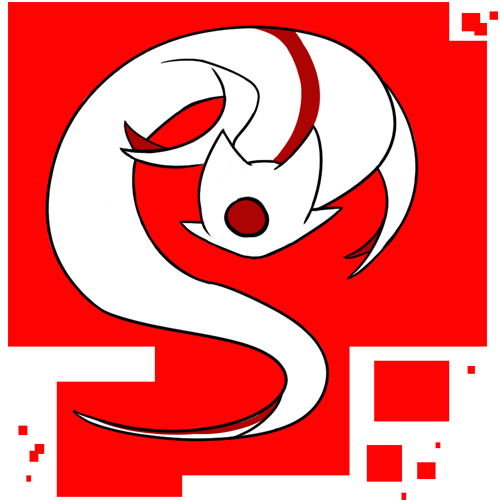 “I am a content creator” — Xor, in the description of its video "STABBING PEOPLE PRANK GONE WRONG(ALMOST DIED!!!) (beautiful malrus GONE SEXUAL! MUST WATCH!!)"

Xor is a long, flattened creature, with a smooth, snow-white body and two clawed arms which bend without permanent joints. Xor has a white, animal-like head with a flat face with a circle on it. This circle is dented inwards and the inside is dark red. It also has a stripe of the same shade all the way down its back, and its long sharp claws are also that same shade of red. The exact shape of Xor's head is symbolic, but it is similar to some feline and canine notail masks, a comparison which it claims to be thoroughly unflattering, as if anyone cared about accidentally insulting it.

Xor moves in a way which can best be described as "sinuous", and is never quite still. It undulates, squirms, and fidgets in a distracting manner, and sometimes even claims to be incapable of not moving at least a little bit. When it goes from place to place, it slithers like a snake, but in a manner which should not be able to propel it as easily and rapidly as it does, and sometimes loses contact with the ground when it stops paying attention.

What exactly Xor is is unclear, as it does not bleed, and the substance it is made of is simply read as "Nothing" by scanners, as they refuse to register the presence of anything less than the whole entity. It does not appear to age, and consumes nothing. As a result of these factors, Xor is considered to be an active anomaly.

It is slovenly, erratic, lazy, and it has a mean sense of humour that is far more malicious than anything you should be friends with. Its voice is hissy and crackly, like someone speaking through a bad telephone line, and rises and falls as it gets more excited.

Xor does not really see other people as alive, claiming that they are all "stale" and "blind". This is likely to be the source of its highly misanthropic behaviour, as Xor has stated that it doesn't actually intent to offend or irritate, despite its almost supernatural unpleasantness.

Sometimes, it seems very intelligent, making casual remarks that cut deep into a person's psyche and effortlessly eluding inescapable traps. However on other occasions it is confused by the idea of putting things on tables, and screams about the evils of lifts while blundering into obvious ambushes.

It plays "pranks" that may consist of no more than slithering up to people and howling at them until they cry, or harassing random passer-bys for inane demands. Sometimes it even outright steals their belongings on camera. A common way to tell that Xor has just been through an area is the angry people in the street and the sound of oncoming sirens. Xor claims that these pranks are only not funny because nobody else gets them like it does, and that the day someone truly understands its sense of humour it will be banished forever. This is probably a lie, but we can only hope.

Xor sometimes picks people to enlighten, and by that we mean to follow them incessantly, simply being itself until either the person is driven to a sufficient level of desperate unhinged-ness that Xor deems them to be fresh or to open-eyed, or they violently attack it, at which point it will usually retreat, rasping and cackling, to haunt someone else. If fending off Xor, however, it is recommended to be deliberately ineffective, as if Xor feels its existence is in danger, it may become violent with no warning and move to kill.

It claimed to be a traveller from a parallel universe, despite having an inconsistent story and no proof of this claim whatsoever, and insisted that it is on a mission to save itself. We asked it if it meant "the universe" and Xor said "No, just me" and left. We didn't notice at the time but it had taken the journalist's keys, which it then dropped in a nearby drain.

Within a year, Xor was imprisoned by researchers, who suspected that the strangely unpleasant being was an anomaly, and attempted to vivisect it. Their research notes indicated that they were making great progress towards identifying the substance it was made from, and also that it has no easily-determinable innards. However, a tweep vlogger broke Xor out of the laboratory as a stunt for their "Anomalous Rights" campaign, and the lab burned down soon after, with all the doors locked from the outside. This vlogger opened up a world of possibilities for Xor, introducing it to the concept of "pranks" as expressed in videos with all-capital titles featuring the phrase "[ALMOST DIED!!!]", and teaching it how to mess with people. Combined with Xors' impossibly unlikeable personality and general field of offensiveness, this of course made it immediately hugely popular on the internet.

These days, Xor has a Spacetube account with several billion subscribers, where it posts videos of its "pranks".

Undeniable: Xor doesn't care what anyone says, it does as it pleases. If Xor wants to board a ship, there will always somehow be room for it no matter how full, and nothing short of actual violence will stop it stowing away and annoying the crew.

• Xor says that it is not a person, but rather a thing that knows, and therefore refuses all designations but "it" and its name.

• Despite its fan clubs insisting otherwise, Xor is not cute, and anyone who had actually met it in person would understand why.

• Xor thinks that cats are the best type of creature in the universe. The notails occasionally bait traps for it with boxes of stray kittens.