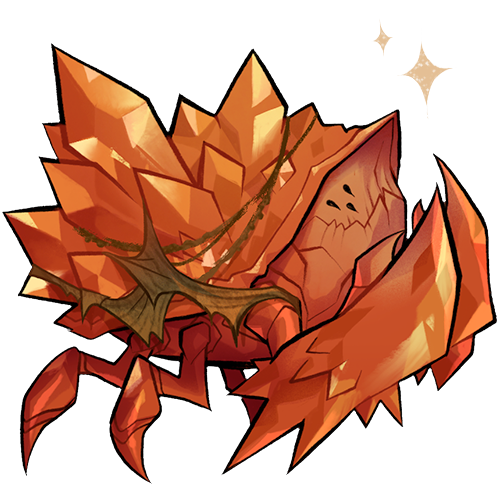 “Boy I am glad that he's frozen in there and that we're out here.” — A pyronian explorer's last words 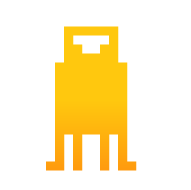 [Bio-Luminescent] Neutral trait
This character emits light naturally.
[Spikes] Positive trait
This character has some sort of natural or built-in protective feature such as quills, spikes, exposed electricity, etc. that result in damage to those who touch that part of them without proper precaution. This feature can be temporarily (or permanently) lost based on overuse or deliberate removal.
[Tunnel Vision] Negative trait
This character lacks awareness of their surroundings.

Wacitie are crustaceans that resemble large mineral clusters of white, red, or yellow phosphorus with four short legs and two arms ending in claws as well as six small black eyes and a small mouth lined with black teeth. While their core is quite tough, their mineral spikes and claws are quite brittle and break easily, although they typically grow back in three to four days.

At the time of their extinction, wactite society was mostly agrarian and so their clothes are made out of rough, dried sea-grass which is draped around them. Most of the clothes are brown or green in color with dyed fringes of yellow or blue. Wactite priests are wrapped with several layers more of clothing, where as wactite that have died prior to their extinction wear nothing at all, and have instead been shoved into large coffins with several holes.

Although a large quantity of wactite were flash-frozen at the time of their extinction and remain as well preserved dead as they were alive, many wactite are in various states of decay, which due to their bodies' unusual activity post-death can result in drastic changes. During decay, the wactite's inner organs slowly began to melt and form a chemical mix which rapidly heats and builds up pressure within the shell. Within two days of decay, the pressure will reach its max and the shell will explode violently, releasing large amounts of toxic gas, acids, and shell shrapnel, while producing large spikes of strengthened shell material in any direction in which there is space.

If you believe you have come upon a site containing wactite, please leave immediately and contact your local authorities. If you are unable to evacuate safely, keep temperatures as low as possible until assistance can arrive. Attempting to dispose of wactite without the proper tools will usually result in failure.

Owning wactite for any reason other than formal research with appropriate permits or attempting to sell wactite is illegal in most sectors. Penalties for using wactite are punishable by the authorities of the planet it is used upon and can range from minor fines to death.

On the deep water planet of Polaber, several aquatic species evolved into sentience simultaneously, however due to the physical abilities of the wactite, all other species were quickly brought to extinction before they could form significant societies or works. Once the last of their competition was killed off, the wactite began to settle down in clusters and farm seaweeds, sponges, and small shrimp-like fauna. As the species grew in knowledge, the killing of young wactite for religious means, construction, and art began to grow in popularity. Elaborate coffins from which to direct the growth of spike shells became popular and most of the buildings and sculptures from after this time period were made solely through this method.

This constant cycle of death would however prove to be the species' downfall. Completely unbeknownst to the wactite, the gasses released from the deaths began piling up in the atmosphere and slowly lowering global temperatures. Soon enough, the temperatures became too cold for wactite living in the north to survive and their deaths exponentially added to the lowering temperatures. This ultimately lead to a global flash-freeze, preventing further decay of the remaining wactite around the equator.

The atmosphere created by this disaster still has yet to subside and so the planet of Polaber remains well below safe temperatures for most visiting species. The inhospitable landscape with mysterious spikes layering the surface only added to the intrigue for many explorers and soon the place was the subject of many an adventure. The extreme tensile strength of these spikes soon led to excavation attempts and with them, the society of the wactite was discovered.

The preserved corpses of wactite began being sold to museums and private collectors all over, furthering the value of artifacts uncovered from Polaber and hastening excavation efforts. Disaster struck as a pyronian dig cracked into the shell of multiple wactite in a cluster, causing a chain explosion and killing the entire crew, while poisoning other nearby crews with the gasses released. This was originally viewed as an accident caused by machinery involved in the dig, however several wactite put up for display unfroze and exploded as well with multiple casualties. It was in through these incidents that the nature of wactite death was discovered as well as the origin of the spikes littering the planet. From then on, wactite has been a banned item in several sectors and excavation efforts have been abandoned. Some pirates and warmongering nations use wactite as chemical weapons, and wactite shell has become increasingly scarce and valuable as a building material.

• Many species consider the fauna on Polaber as well as wactite incredibly tasty.

• Various messages scrawled upon wactite temples indicate the belief that one day a great tower would be constructed upon the corpses of their children with which they would climb to the stars to receive their just reward while the nonbelievers would boil below. This is obviously not things played out.

-Back to Species Menu-
< Volkronn
Waylend >