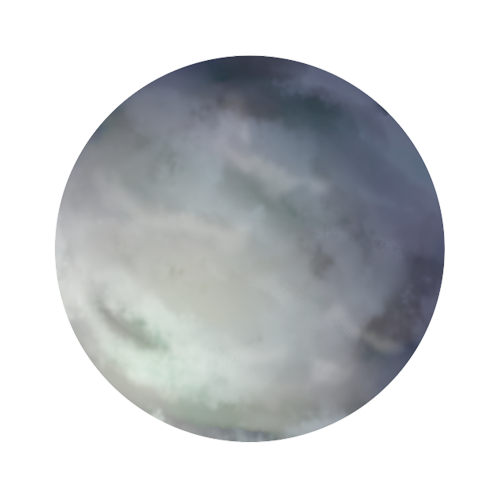 “It's raining somewhere else, and that somewhere is Collmoros.” — A very moist weatherman.

Fauna: Fairly deadly beasts, always looking for a n'nik snack
Weather: Due to the very rapid water cycle, it is nearly always raining on Collmoros, and the sky is a patchwork of clouds, more clouds, and sometimes blank spots where you can actually see the sky. Most inhabitants have never seen the sun.

From space, Collmoros appears as a nearly solid grey planet, with a roiling surface and glimpses of darker grey and green. In reality, these are just stormclouds that perpetually cover the planet's surface. One must go below the cloud layer to see the beautiful, if wet, landscape below, covered in thick pine-like forests and craggy mountains. There are very few above-ground rivers and lakes due to the rapid water cycle of the planet, most of it's water is obtained through the constant rain.

For visitors and stop-overs, the cities are the safest places to be. Protected by walls and with a significant lack of vegetation, and always full of bright light and loud sounds, very few of the native predators bother to enter. Many cities are built around a central building, a large vaeri science laboratory where they carry out only-slightly-illegal experiments on local and imported fauna. Other cities were built by the n'nik themselves and lack the modern steel-and-chrome look of major cities, typically constructed out of stone with imposing-looking sharp log walls, though you can find the occasional wooden or metallic dwelling within.

Collmoros' mountains run in long bands along the equator and near both poles. Composed of black and dark grey-blue rock, the terrain is treacherous if footwear is not worn due to the sharp nature of the rocks and how slippery they are from the near-constant rain. Sprinkled throughout the mountain ranges are deep natural caves with underground rivers and bioluminescent fungi, and while this sounds lovely, it is also where the camnequoi, Collmoros' apex predator lives. Adventurers can pull precious metals and gems from these caves, but at the cost of lives if proper precautions are not taken. A few have tried to build outposts in the mountains but with no success, leaving many abandoned towns.

The forests are always dangerous, but the danger is easy to avoid if you know how. Most of the trees on Collmoros resemble the kinds of evergreen trees you would see on Earth, with various shades of brown or grey bark, and needles ranging from yellow-green to green-blue. There is not much undergrowth due to the soil being very pebbly, and what soil there is usually is washed around by the rain. Many n'nik still live in these forests in their quays, and while it is a notably more difficult existence than what they could find in the city, they enjoy sticking to their roots and original homes, with the benefit of technology of course.

A long time ago, three gods were born. Arlaef, goddess of the earth, Kieme, god of the water, and Etramnael, god of the sky. The three siblings used their powers to create Collmoros, and with it the n'nik and everything they would need to survive. But Enmole, goddess of fire, was left out of the creation, and she grew furious with her siblings. In secret she plotted and planned, spending centuries and yet seconds on her creations before unleashing them on the world.

Horrible predators like the camnequoi, disease, injury, and death were wrought upon the n'nik, nearly causing extinction. The gods of creation fought with the god of chaos for decades, with the n'nik providing sacrifice after sacrifice to help their gods. Eventually, Arlaef, Kieme, and Etramnael were able to trap Enmole in a different realm, left forever to suffer in her own fire and hatred. The damage had been done, however, and the n'nik now had to contend with vicious predators and all manner of unpleasantries besides. After this event the n'nik began to lose faith in their gods, and while not falling out with them completely, it is rare to find a n'nik who is a hard-core worshipper of the three.

Or at least, that's how the n'nik believe everything happened. To the rest of the universe Collmoros was discovered by a group of vaeri scientists looking for new places to experiment. After its discovery and subsequent introduction of the dominant species, the n'nik, to the space age, it has become mildly urbanized, and is seen as a good getaway destination for those who enjoy the rain and also don't mind a little bit of mortal peril every now and then.

Scolcoffi Range: The largest mountain range on Collmoros, a 4160 mile strip of craggy peaks wrapped around the equator. It is also the most rich in rare minerals, and the most dangerous. Home to the largest number of camnequoi, many adventurers have met their demise there. It is also home to Kindadamp, a large abandoned outpost designed to harbor miners and adventurers. There's probably a lot of loot up there, but it's all kind of damp.

Labradorix: Considered the main city of Collmoros, Labradorix was originally nothing but a science laboratory for the vaeri. As more species began to come to the planet, however, a sprawling urban city was built around it, and the vaeri "converted" it into a hospital. Of course, there is still a secret lab underneath, but with such great health care no one really minds.

Other than the science hospital, there are many wonderful shops to visit in Labradorix, often run by -or at least supplied by- the local n'nik themselves. It is not uncommon to find jewelry carved from the native stone and embellished with inlays of their own quills.

• Almost all of the species on Collmoros are deadly in one way or another, but most are easy to avoid so therefore do not pose a threat to careful adventurers and explorers.