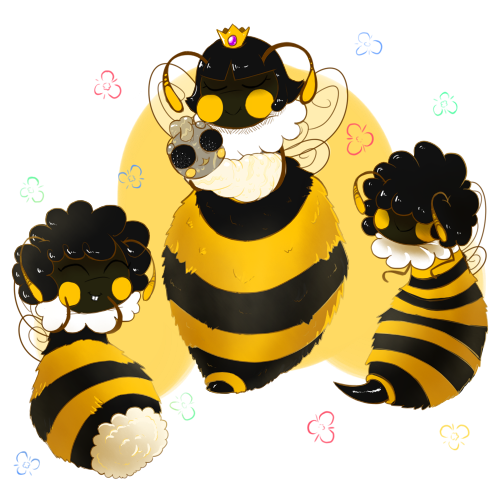 Attack Method: Bumble about in a vaguely hostile manner, stinging with their stingers.

Bimbledees for the most part resemble large bees, a little over a foot-and-a-half in height. They have dark, typically gray or brown skin, and a largish round head topped with a pair of bee-like antenna and a mop of black hair. They have a pair of largish black eyes, and a wide mouth usually found in a somewhat dopey expression.

They have a fuzzy white fur "collar" separating their head and torso. On their torso they have at least one pair of stubby arms which end in a fairly basic set of graspers. Sometimes bimbledee are born with more than one pair of arms, though the most recorded is three pairs, or six arms in total.

They have a fat beeish body that terminates in a bulbous abdomen, ending itself in a large stinger. Their body is covered in a thin flexible carapace, decorated in black and yellow stripes of varying number and design. Most of a bimbledee's body is furthermore, covered in a layer of short, soft, fur, that is its fuzziest on the abdomen, and shortest on their torso.

Bimbledee are divided into a typical, bee colony structure. The main group are the workers, described previously, then there's the "drones" who are entirely dedicated to "certain responsibilities" with the queen, and are distinguished by their lack of stinger. And of course, the Queen Bimbledee, in charge of the colony and its proliferation, of which there is usually only one per colony.

The Queen Bimbledee is slightly larger and more "elegant" than the normal bimbledee, and wears a crown. Nobody knows where they get the crowns, but they are rarely found without one.

Bimbledee are very similar to apidee in most fundamental ways. They are gleeful, saccharine and friendly to an extent that if often considered "annoying" to non-apidee or bimbledee. Unlike apidee though bimbledee have in fact been reported displaying emotions beyond a "chipper disposition" though this is a rare occurrence as bimbledees are a firm example of the phrase "ignorance is bliss" as in spite of their capacity to feel negative emotions, they're usually stubbornly happy anyway.

Bimbledee are deceptively intelligent. Deceptively, of course, because they act in a manner that most would charitably describe as "absolutely [stupid]". In spite of this apparent lack of intellect, bimbledee display a keen understanding of fairly complex ideas, at least so long as an apidee is around to explain it to them, as they are seemingly more receptive to ideas given by apidees.

This likely is in part due to their communal nature. Unlike apidees, bimbledees are linked through a partial "mind-hive". Every bimbledee can communicate psionically with every other bimbledee in their particular hive, and even with an apidee, though apidees cannot respond in the same way. Bimbledee, quite unlike their more sophisticated cousins, retain a bee-like hive structure organized around a queen, and drones.

Swordpledee: A subspecies that conspicuously only started appearing when notails started using bimbledee as capture creatures. Swordpledee are bigger and meaner than normal bimbledee. And also have swords for hands.

Bumbledee: A subspecies of bimbledee that's fatter and jollier. Unlike most bees and bee-like creatures, bumbldees wings are, in fact, too small to get their fat little bodies off the ground. In spite of this, bumbledees still "fly" in relatively short "bumbles".

• Like most Apidarian creatures, bimbledees are purported, especially by religious apidee, to be creations of the Three Mother Bees. Specifically, it's held that they were the "Predecessor" or in more technical terms, prototype, of the modern apidee.

• Reportedly there used to be a capture creature species very similar to bimbledees, that was evidently discontinued for reasons that haven't bee released. Nothing to do with that, notails insist, bimbledees are sometimes used as capture creatures by adult notails, often to the point of creating wild populations on notail planets.

• Apidee believe, as bimbledee are older than them, that they know the "secret" to what the Three Mother Bees were, and were about, and due to their "Mind Hive" they have retained this information in their "racial memory". If this is true, the bimbledee aren't sharing, much to the consternation of their younger cousins.