Dark Lady of Darkness / The Obnoxious 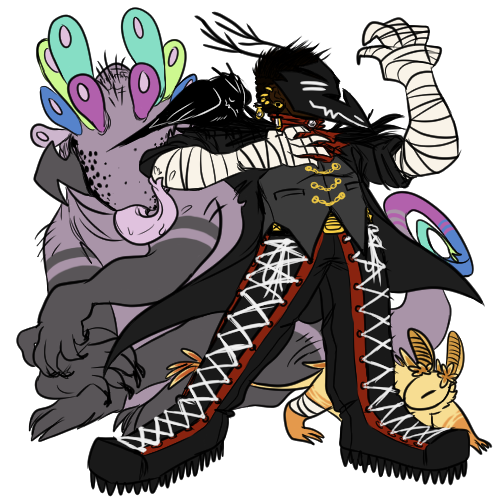 “CALL FORTH THE DEMON HORDE! =w#” — V-37, asking for his assistant to bring him the baby mallons

Art by, Ken, colors by Kodai

Job: V-class leader
Likes: Plague Bringers (Mallons), Dark Incantations (Poetry), Bringing the teachings of the Accursed to the uninitiated (Lecturing people about animal care)
Dislikes: Those below his power level (Most non-fauna), Sunny days, Evofluid, Z-100
Notable contributions: V-37 is the current leader of the V-et class notails and oversees animal testing and upkeep of capture creature clinic standards of sanitation and care.

[Animal Communer] Positive trait
This character is more likely to be in tune with animals. While they cannot speak "animal" they are able to understand their emotions and the animal is likely able to understand them.
[Passionate About Proper Animal Care] Positive trait
The character has a strong passion for some area. They might know more about this stuff than others, or may perform better on tasks relating to this topic than someone else with equivalent traits and skills.
[Honest] Neutral trait
This character cannot bring themselves to mislead others, and will try not to keep secrets from fellow crew. Most will appreciate their honesty, but it can anger others or even land them in trouble if they aren't careful.
[Superstitious] Neutral trait
This character is more likely to believe in myths, ghosts, and old traditions relating to them. They may have a tradition they follow and may refuse to do certain things that may cause a bad omen to appear, or give them bad luck.
[Cryptic] Negative trait
This character speaks in riddles, code, and tends to be hidden about their words. Due to this it's hard for people around them to understand what they are trying to say. This character might be so dedicated to their riddles that they are willing to endanger others with their unwillingness to stop.
[Egotistical] Negative trait
Often going hand in hand with [Narcissist], this character believes that they are so far above everyone else, they would need a periscope just to look them in the eyes. Their treatment towards others reflects this.
[Monomaniacal] Negative trait
This character displays an obsessive focus on a single thing or related group of things. It may be difficult to get them to do things unrelated to their obsession, and can be extremely agitated when their obsession isn't respected.
[Self-Hatred] Negative trait
This character hates themselves. Why they hate themselves could be for many reasons, but it doesn't matter, they don't matter, and they might assume that others hate them as much as they do. Even if no one hates them, and in fact they support this character, it won't change much. They're still horrible and everyone should stay away.

V-37 is a towering figure, prone to looming over others, his long black overcoat billowing out behind him. All his clothes come in shades of black, purple, and red, adorned with gold and silver buttons and chains. The ears poking out from behind the facsimile of a raven he wears on his face are covered in piercings, not an inch of skin left; every earring is gold or silver, with chains and religious symbols and miniature flasks dangling from them. The suggestion he should wear any other colors is met with only snapped out words and him turning his beak up at the commenters, incensed; even unable to see his teeth it's clear he's sneering under his mask.

Said mask has a =w# expression, the W shape a ragged scar over the bridge of the nose and the lines through the right eye two scratches cut deep into it. Little of his jet black hair shows: it's buzzed to nothing on the edges, but slightly longer on the top where it's spiked up. Due to a mutation the antennae poking from that hair is like antlers with its branching. Almost all of his skin is covered, including his arms. It isn't known why his arms and hands are actually covered, as V-37's statements are unclear and he avoids making them in the first place. It's possible his arms are completely disfigured from attacks from the dangerous animals he works with, possibly so bad they had to be replaced, or he has an illness that would be spread with contact via the skin. It is also possible his arms are fine and he just wears the bandages for the aesthetic of it.

It's clear V-37 wants to have a serious, dangerous image, to be respected. It's hard to do this though when everything he does undermines that. His persona is so overdone as to be comical. Overacted. Try hard. He blusters and rants, and nothing he says makes sense unless one has known him for a while, words all tied up in his Dark Lady persona, a role-play only he's party to, and one where he gets angry if other people don't want to know the lore. His leather boots (that are also pants and are tied up to his waist) might have been cool in his eye, but it's impossible for it to be taken seriously by anyone else. It doesn't help that he seems to hate people in general and wants nothing to do with anyone, and will be nothing but unkind to those he speaks. He might develop grudging respect and a modicum of trust for a select few people (all of whom end up being the only ones who work with him directly and are trusted with tasks), but even then he has trouble dropping his tendency to unnecessary cruelty in his words. He lacks tact and just says what he thinks, and his thoughts are rarely positive. While it's normal for V-classes to not care for other notails, the intensity of it is what sets V-37 apart, his hatred of seemingly all people vitriolic.

He's a different person entirely with fauna though: his way with words is the same, but the tone is markedly different. His deep love of animal life is the reason he's risen to his position, and that love shows in everything he does when interacting with them. His knowledge of what any creature needs to be properly taken care of is vast, and will go off on related tangents at the drop of a hat without anyone asking or caring. This love also comes with a religious tinge: V-37 is personally fervently religious, and he believes animals are the key to killing the gods.

V-37 was born the way most notails are, in a batch of other V-class children, and assigned the number V-38471011. Young V-37 was awkward and unsociable, traits that would anything but fade as he got older, and even without his antenna mutation he had no talent for communicating. He was also weird, acutely so, and the other children were quick to pick him out. Any time something went wrong it would inevitably be blamed on him whether it actually had anything to do with him or not: "Nothing ever goes right with V-38471011 around". Over time he stopped being involved with the others at all, hiding from any group activities, and so only got worse at handling interacting with others leading to a vicious cycle.

Most of V-37's childhood before entering the woods then was spent alone: either in the church where the village N-class had taken pity on him and let him hide there, or outside of the village when he wasn't supposed to be. About the only thing he was supposed to be doing that he did was V-eterinary studies if required teamwork was as limited as possible. Even if it came at the expense of his ability to socialize at all though, V-37 excelled on technical level and had plenty of hands on experience right out of the gate.

By the time V-37 entered the woods he had been completely ostracized, and so he went into the woods entirely alone. Somehow he scraped out by himself, and by the time he got out of the woods he had also decided that he didn't need anyone else either, accepting wholeheartedly the idea that there was something wrong with him, that he was meant to be hated, and that therefore he should embrace all his terribleness. Needed no one else but animals of course: when V-37 stepped out of those trees he came along with a complete menagerie of wild animals that had been injured and that he had helped and in turn gained the trust of. In the woods he had taken to being a V-et like a fish to water. He stole medical supplies from S-classes, and followed kaws to find injured animals. The kaws were so indispensable and had such an impact on V-37 that they became his mask.

Out of childhood and into adulthood, V-37 once again found himself unable to connect with other notails, but instead of cowering like he had it threw fuel into the flames of the anger and arrogance he had begun to take on to protect himself. Charismatic or not, his actual work was consistently the best in his class for his age. The more time passed, the worse his egotism got and the more he grew to hate nearly everyone else even among the V-class until it finally tipped over and crashed into a certainty he was destined to be in charge. V-37 believed this. He had seen how things were being run, particularly with evofluid and it's misuse by the prior V-class leader, and he rankled at the knowledge he knew far better what was needed but wasn't able to enact it. V-37 had had no prior leadership roles and in fact had always been widely hated throughout his whole life but he didn't care: what mattered was he had plans and a fate he had decided for himself. That was why one fateful day he stomped up to the class leader's office and "challenged them to a duel".

The actual challenge to the leadership position was done straightforwardly and the ensuing transition of power was smooth and bloodless. V-37 has since been V-37, keeping ahold of the role purely by virtue of just being good at his job and also being physically a powerhouse. The V-classes have just had to learn to deal with V-37's particular quirks and also his abrasiveness. In particular V-37 is harsh about experimentation: his primary rule is "if you wouldn't be willing to do it to yourself, don't do it to an animal". V-37's been known to threaten others with making them drink evofluid if they're really so certain about using it on anything else, though he's never followed through with that threat as far as anyone is aware for the obvious reasons.

Animal Magnetism: V-37 seems to attract animals to him, and animals are calmed in his presence. Of course, this has its limits, as one can only calm an animal terrified and in pain so much.

• There are odd couples, and then there is V-37's widely known and mocked crush on Princess. It would be sweet if V-37 wasn't so bad at communicating anything at all.

• V-37 uses he/him pronouns primarily, and does not use she/her pronouns. He still isn't a man though and will absolutely try to gouge out the eyes of anyone who says he is.

• "Instead of falling into the arms of death, the Dark Lady is reborn in blood and fire to continue his scourge upon the universe until he is challenged by a greater evil then he." (V-37's words which he insisted on being put here in place of the usual trivia.)