“When the cyclops returned to the cave in which it had thrown us, its massive form blotted out the sun. It was as large and barren as the fire-scorched mountains, and what once might have been wings were stripped of feathers and twisted into a malformed mockery of hands. But what we would remember most was one , the horrid gaze of its singular, beautiful eye as it reduced our friends to slick blood and crunching bone.” — Excerpt from Chapter 9 of The Circle Works by Remoh

Attack Method: Either grabbing, stomping, or throwing large stones. It isn't trying to kill the first time, but if it fails or its prey runs away after it's caught them it goes into a mindless rage.
Summary: One-eyed giants that hypnotize flocks of creatures for eating and increasing its size. As long as it has a supply of food in the territory it walks it won't go out hunting and infecting people and is relatively safe as long as you stay away from it (highly recommended, you are unlikely of standing a chance against one without serious preparation).

The first thing one will notice about a cyclops is its massive size. The second thing though will be its singular eye in the center of its head, its mesmerizing colors hypnotizing and hard to look away from. Of course, if the viewer doesn't and doesn't run, the third thing they'll see of a cyclops is the inside of its hand as it grabs them. At this point they'll be lucky if they're ever seen again.

A cyclops will look like the creature it infected but gargantuan in scale, and its original colors muted into shades of gray and brown; the only visible bright colors on any cyclops is in their eye and in the splashes of color ringing it, and so the onlooker's eyes are naturally drawn to its. Any other eyes it may have had are melted shut forever. The mouth will have been shoved down to hinge open along the jawline, and when it opens the inside is bright and hypnotic like its eye: in fact the inside of its opened mouth somewhat resembles its eye, which will be on top of its head when the mouth is fully open. If what it infected didn't have hands, the clockwork will fuse parts or stretch out bones from wings to form something, no matter how malformed, that can physically hold an object, person, or multiple people.

Cyclops are lumbering giants, moving slow with heavy footfalls through the territory they have laid claim to. Most of them are out in unpopulated areas: ones that try to lay claim to anywhere with a number of people will be a target for immediate removal before it gets any larger. In its territory a cyclops keeps a disparate herd of creatures hypnotized by its eye and following it wherever it might go, and it snaps these up like snacks as it goes, kept satiated. If it finds anything in its territory it can't hypnotize, the creature will be grabbed and put somewhere they can't escape easily from, usually a cave blocked by a rock or a pit with steep sides, left to eat later.

While this seems at first to be intelligence it's purely instinct: the cyclops doesn't even consider what it grabs might be able to fly or climb, or has a strength as great as it. If they do get out and try to escape it will respond immediately by laser focusing on its prey with intent to kill. Outside this, all a cyclops does is pick off its herd and grow bigger as it eats, what it sees as its territory increasing with its size. While rare, if there are multiple cyclops and their territories intersect they will share the area but mostly avoid each other.

When someone has been infected with the cyclops strain, the first sign will always be a desire to hoard food, specifically meats, to an excessive degree and stay in their home. If anyone visits, the infected will prevent them from leaving and may feel the urge to attack when they do. As the infected person stays inside more and more, only leaving to get food for their stockpile, they'll also eat more and more, flesh and bone stretching and growing larger in unnatural ways. One or more eyes will shut and the skin will melt to close them forever. When they go outside they'll see small animals and want to eat them, and then will see other people and want to eat them too. At this point the infected will realize what is happening and still be themself enough to react to it. They usually run terrified out of the city into the wilderness, where the virus will overtake them completely a safe distance away from any people, and anyone that could have stopped them. This kind of behavior is generally known and told to watch for.

Nilops: A cyclops that, either because it infected something without eyes or lost its eye, is without one. Instead there is only a gaping hole where it would be, a highly infectious pitch black substance dripping from it. Without the ability to hypnotize and keep a docile herd of food around, a nilops becomes actively aggressive, either eating anything it finds immediately without thought or killing it and packing the body into a cave along with its past kills to pick from later. This quickly becomes disgusting of course, and the scent of rot scares anything from coming close; along with killing everything in the surrounding area this pushes the nilops to travel further and further out to eat until it reaches a civilized area. This never ends well.

Hypnoticeye: Anything that's caught staring into a cyclops' eye will have trouble looking away and will feel calmed and want to follow it. While this affect can last for an extended period on most fauna, the same can't be said for sentient species. While it might have a momentary hold, usually they can snap themselves out of it.

• It isn't known if there is an upper limit on how large a cyclops can grow given long enough or enough food. Its obscene growth rate slows substantially at a certain point thankfully, but it doesn't seem to stop.

• A cyclops is dangerous and when it gets big it's difficult to get rid of, but due to how it's easier to catch early it's fairly rare. Most cyclops come from people who were caught by one and then escaped, so it is advised to tell someone if you were in contact with a cyclops so the spread can be stopped with you.

• There have been cases of people mistaking the behavior of a recluse for that of someone infected by the cyclops strain. It's better to be safe then sorry with a cyclops though. 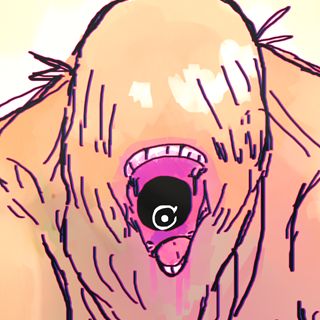 -Back to Clockwork Menu-
< Crocotta
Harpy >