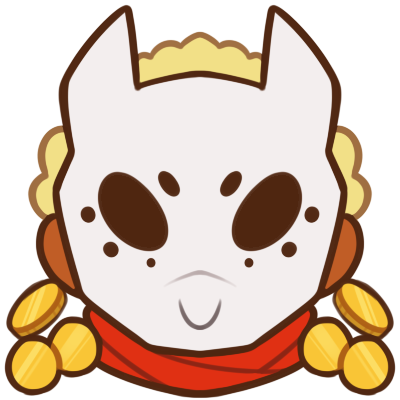 Job: Notail Leader of the T-class and W-class
Likes: Money, Favors, Vacations, Material goods, Order, Helping others, Deals, Mirrors, Blues
Dislikes: Drama, People who won't pay up, Poverty, Ants, Reds
Notable contributions: O-X leads the T-reasurer and W-aiter class of notails. O-X's job is to take care of the finances for the notails and making sure the other O-classes get their jobs done on time and without drama.

[Calm] Neutral trait
This character tends to be calmer than most and is slightly more likely to be able to calm down faster in tense situations and clear their mind.
[Logical] Positive trait
This character is very logical about things and never jumps to assumptions if possible. They are more likely to make very educated guesses and more rational choices even if they do not agree with the choices emotionally.
[Connections] Positive trait
This character has some sort of important connection to someone else. These connections often times owe the character a few favors.
[Cooperative] Positive trait
This character does wonderfully in team situations and is always willing to follow plans. This character is almost always ready and willing to help and others rarely feel this character is dragging their feet in a team related operation.
[Respectful] Positive trait
This character is respectful and will respect the wishes of others or at the very least will make a compromise. Many others will feel safer talking to this character after their first talk and talking to them raises sanity and morale.
[Investment] Positive trait
A third party has taken interest in ensuring this character succeeds. Each new planet they will be left a package from this benefactor, containing items and/or credits. In exchange, they are required to handle small errands through their travels.
[Erythrophobia] Negative trait
Red. Red. Red. A color of warning. A color of danger. The color of blood. The more red around, the more nervous O-X becomes, until he snaps, becoming irrational and aggressive.
[Veto] Ability trait
Veto allows this character to cancel out an action, and the consequences of that action. Example, if [Veto] is used to cancel out someone firing a gun, the gun will have the same amount of rounds as it would have if it wasn't fired, and the target will be unharmed. Keep in mind that nothing stops them from just shooting again though.

Despite being a notail, O-X has a rather friendly look to him, one that seems honest, like a person one would meet everyday. O-X stands tall and commonly with his hands at his hip when not in motion to make himself appear bigger. He wears simple dark pants, and a grey tracksuit. Strangely enough O-X tends to wear this tracksuit half opened and with no undershirt under it.

O-X has tan skin, leaning closer to the darker end, and short blond hair, a rarity among notails. O-X tends to not raise his antennas unless needed due to an incident involving them being pulled out when young. When he does raise it he tends to point it forward, the very tips of the antenna pointing upwards. O-X mask is a fairly flat mask, with two horns at the top, three painted dots surrounding each eye hole, and painted on eyebrows. He always does a c:< face.

Despite O-X's phobia of large amounts of the color red he wears a red neckerchief and red shoes. This serves as a subtle warning to all, he's dangerous.

Ox is intimidating and yet easy for aliens to approach. He has a very friendly disposition. Firm hand shakes are the bread and butter of Ox's way of life. He is quick to form friendships and insert himself into social groups. In a way, he is a friendly infiltrator, give him what he wants and he'll be glad to call in a few favors. Don't and well, if Ox had a mother, he wouldn't raise his head to even view her one last time if she was dying if she wasn't paying him for his time.

Notails come first, the health of his close friends come second, but money and valuables come third, and everything after that is of no concern to him. Anyone who wants to talk to Ox better have the money or power to hold his interest.

This obsession with large sums of money and lavish items is not something Ox had before he became and O-class, instead it came with time. Surrounding himself with expensive and one of a kind objects seems to be some sort of way Ox attempts to grab attention. After all, Ox is a fairly boring notail.

He doesn't start drama, move planets, or attempts to change large amounts of things at the same time. Ox rather take the slow but sturdy path where the chance of failures is low, but the chance of new investments, lessons, and earnings is high. Boring, just boring. Compared to all the other O-classes who are bright, colorful, horrifyingly destructive, and dominant notails who make headlines all the time, Ox just exists. Always a footnote in another O-class's article.

They don't is how. People who countlessly succeed and don't start fights are boring.

Ox is the enforcer of the O-class. He helps the O-classes when he wants, but he also tells them when they're going too far and when to stop. Constantly putting himself, sometimes physically in the middle of fights and getting the brunt of damage, he will stop an unnecessary fight if it kills him. For this everyone has some amount of respect for Ox. They also have a bit of fear.

Ox interacts with a lot of aliens, aliens who have things he wants. Money, rare species heirlooms, and houses in prime spots. Ox wants those. If a species is being bullied or tossed around by the notails, they go to Ox. If Ox deems the species not a threat to him and they have something he wants, he pulls a few strings. He blackmails a few people. Casually of course, he's not here to cause a fight.

If Ox shows up in an office uninvited, one can bet he has papers that he will lay on the table, papers with private intimate details or issues, all provided by either O-9 or O-2. Long as notails aren't harmed, all three of them don't mind selling out their own species. Many times Ox doesn't even need to blackmail someone as Ox does many tasks for many people, some he can't even talk about. Then that person owes him favors.

Favors Ox intends on cashing out.

Ox was born a T-reasurer class in a period of high instability for notails due to funding issues. Ox learned quickly to keep his head down in most situations and learned to mediate fights between kids over limited resources. Overall a rather normal story for a notail in the time he was born. His years in the woods with his seizing bird went fairly smooth, with his irrational fear of anything red keeping him from eating anything too strange. The only part of note is when his own seizing bird ripped out his antennas in fight over food. He got them replaced but he forever keeps his antennas flattened unless utterly needed.

After getting out of the woods Ox started working as a treasurer, and except for the fact that he was a rather exceptional treasurer nothing truly stood out at this time. One day Ox saw in the papers that the O-10 at the time had decided to resign from his job due to failure and also a rather aggressive streak of his personal info being leaked into the public. Some of info showed rather shady and underhanded deals that helped contribute to the resource deficit. This was one of the few times an O-10 had ever resigned, and the first time it had happened in a long time.

Not many people were brave enough to apply for the O-10 job but Ox brought his resume in, had his interviews, and somehow got the job. While not as exciting as killing someone for a job he wasn't going to complain. When he joined the O-class he changed his mask from c:> to c:< to reflect his new status.

He calmly got to work on fixing all the issues that the old O-10 had either caused, or was unable to fix. In this time Ox was being watched closely by the media. The attention delighted him instead of scaring him. It was one of the first times he was being seen as anything but a brick wall between two opposing parties. Ox couldn't fail them, and he wouldn't. For a few years the news hailed his achievements until things were mostly back to normal.

People quickly started to forget about Ox even though he continued to succeed. With everything back in its correct order it just wasn't interesting anymore. In this time Ox decided that he no longer wanted to be called O-10, and that his new name would be Ox, he also started to collect rare objects and hoard money. None of these things brought attention to him though. All the other O-classes had much more interesting adventures and backstories, and then there was Ox, the notail who got attacked by his own bird once and submitted a resume on a hunch.

Today Ox travels around with other O-classes, mainly O-2 and O-9 as he has formed a bond with them both, stopping fights and bad decisions, trying to teach them better habits. Maybe he hopes to set them on the same level as him, so that he can be noticed once again.

But considering this is Ox, it's unlikely to actually be that deep.

• There's nothing that caused Ox's fear of red and his hate of ants, it's utterly irrational and has no backstory to it.

• Ox hates poverty as it implies that the group has nothing to give or take. Ox prefers to fix areas of poverty so that he can profit off of them.

• Ox currently owns a small flock of fancy small seizing birds that collect items of just one color. Any that collect red are removed. 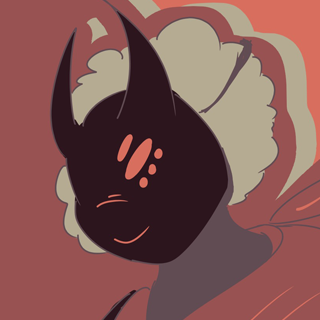 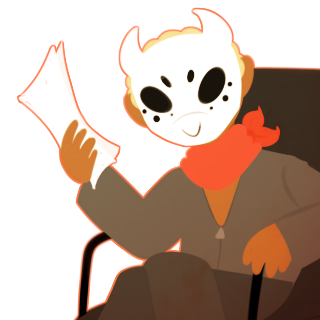 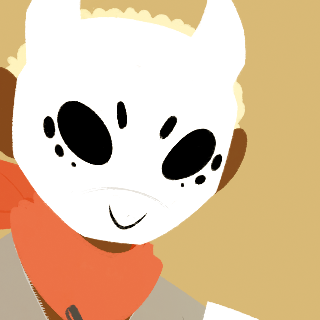 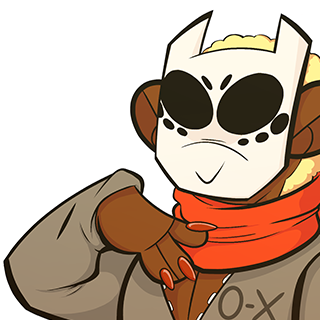 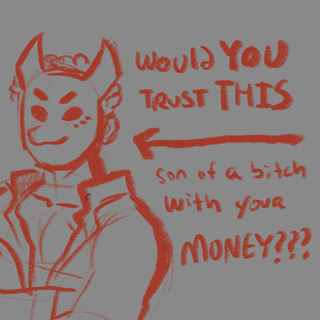 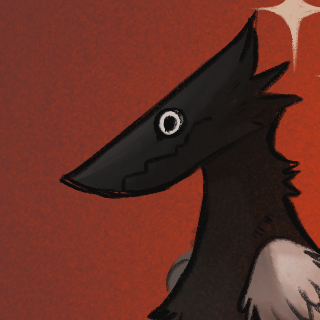