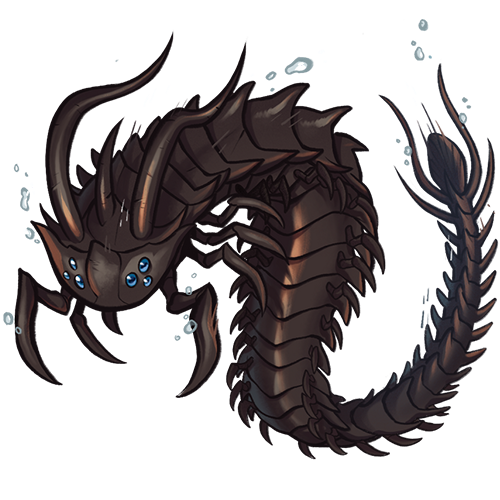 “So long and thanks for all the junk!” — A typical jugoroo greeting and farewell

[Mimic] Neutral trait
Characters with this trait have a tendency of very frequently picking up just about anything from the speech and actions of people around them, as well as media they consume.
[Sand Camouflage] Positive trait
This character is incredibly hard to see while on a sandy type of terrain. When camouflaged they can move around very stealthily.
[Kleptomania] Negative trait
This character compulsively steals items, even if the character does not have a want or use for the items stolen. This character may hide stolen items for them to turn up later, or simply hoard them all in one big secret location.

Despite their insatiable appetite for theft, stealing gods is not of great interest to most jugoroo, with the exception of the ethewe god Orio which is based upon the jugoroo species.

Jugoroo are a species of short and incredibly long arthropods. They have six eyes with wavy pupils, eight legs with three sharp claw segments each, four mandibles, a short flat tail, a ridged and segmented shell with a spiky fringe, and two long horns trailing along the shell from their head in a parallel trail to a few feet beyond their tail. Their eyes range in color from navy blue to bright purple. Jugoroo shells can be any earthy brown or tan color as well as dark green. Although it is rarely relevant, their blood is bright blue in color like some crustaceans. They have no notable sexual dimorphism.

Beyond their default state, jugoroo gradually accumulate a train of discarded shells behind their body which are hooked onto their horns or the horns on other pieces of shell. These shells allow jugoroo to extend their body well beyond its normal length with a great number of shed chitinous legs and build up incredible amounts of speed. Typically these shells slide straight onto the horns from the main body after a violent enough impact to damage the main shell or a molt after growth, although shells can be manually added on if they fit.

While many jugoroo make full use of their natural camouflage, it is not unusual to see a jugoroo wearing clothing. Typically, jugoroo adornments and clothing come in the form of rings on their horns, body paint, backpacks and other packs strapped around their tail, and full body sweaters.

Jugoroo are a mostly affable species aside from their inability to keep their claws off of others belongings. Shiny things, art, entire planets, they want it all. They are always in a rush to go do something, except when lounging with their stolen goods. Valuing cooperation, they often live in large groups with other jugoroo and occasionally other species.

Many jugoroo copy other people's mannerisms and thus do not have much of a distinctive culture of their own.

Evolving on the tropical paradise of Polaber, way back before the wactites ruined it for everyone and made it an inhabitable icy wasteland, jugoroo were a fairly small prey species on the planet. They mostly subsided off of forests of ocean vegetation and made their homes in the warm sand and earth, digging tunnels deep into it. While they were not the smartest species on the planet, their high speeds led to them stealing from other more developed species and using the stolen technology and developments for their own gain. Despite the ethewe being one of the most desirable foods of jugoroo, the two species managed to reach a tenuous alliance which the ethewe would further develop with many other species on the planet.

Soon enough, the alliance would find a purpose as they caught onto the ever quickening destruction of the environment by wactites. Along with the other species in the alliance, although rarely useful other than for gathering materials, the jugoroo developed a spaceship and made a mass exodus to the nearby planet Architego. Settling in and declaring themselves the Exoduds, the new inter species alliance made the best of what they had, collapsing multiple times under the combined poor decision making of its members. The jugoroo, although skittish of other species initially, outside of stealing their goods, worked well in groups and integrated swiftly to the new situation.

The Exoduds were extremely hostile to species outside their alliance who would eventually stumble upon their system, but they managed to establish trading and communication nonetheless. Jugoroo used this opportunity to steal as much as possible and coalesce it on their own planets and continue to do so still. While they are quite useful, most jugoroo are now met with much suspicion due to the infamy of their heists.

Lateral Fan: Lateral fan jugoroo's most distinctive feature is their spread horns at a roughly thirty degree angle away from their head as well as the additional spikes branching off of them. After a molt, the shell splits into two wide pieces that travel along these horns into a 'v' shaped train. Lateral fan jugoroo also have thicker legs and a small brow like point to the front of their shell.

Generally, the features of this subspecies are more cumbersome than beneficial as their supposed original adaptive purpose was to break through rocks or shield other jugoroo traveling behind them from debris. In modern times where predators are virtually nonexistent the lateral fan trains just provide drag and make it hard to get through doorways.

Vertical Point: Vertical point jugoroo's most distinctive feature is their gradual upward curve to their horns. This curve allows their train to have greater upwards flexibility to the point where the train can be flipped over their entire body and in front of them akin to a stinger. Vertical point jugaroo also have longer legs and mandibles.

This subspecies is adept at burrowing into sand and dirt although they suffer from being completely unable to turn at high speeds.

Crowned: Crowned jugoroo's most distinctive feature is their straight up and down horns. Due to this alignment, they can stack upon other crowned jugoroo but cannot build their own train and simply lose their shell upon molting. Crowned jugoroo also are a few feet larger than their counterparts.

This subspecies is widely considered a disgrace of a proper jugoroo due to their lack of a train but its members are significantly better at physical combat.

No Brakes: By rapidly pumping their legs across their entire body and train jugoroo can accelerate their running speed up to tenfold greater than normal. Once a jugoroo gains more than a quarter of their normal speed their legs will no longer be able to safely stop without scraping their underbelly and likely shearing off legs. Due to this and a poor ability to decelerate, jugoroo usually continue going faster until they hit something solid enough and are able to use their shell to absorb most of the impact. It is important to note that careful turning during this time is also difficult, especially if you are in their way.

• The largest cause of death for jugoroo is starvation after being blocked in by their own train.

• Locks alone are never enough for a clever jugoroo.