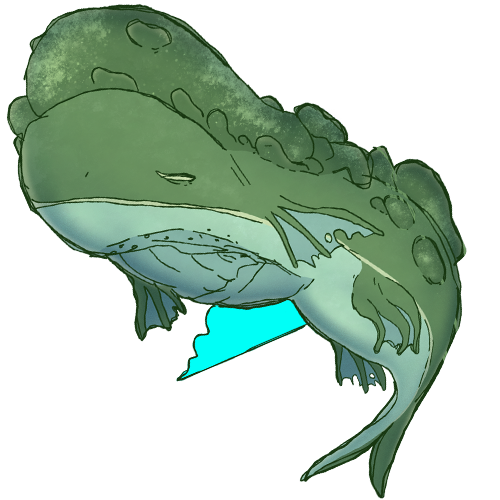 “Big, huge, and amazing.” — Person talking about the cloud gulpers

Attack Method: Attempts to grab with mouth-scoop and crushes it.

Cloud-gulpers are huge, bulbous creatures that are lighter-than-air. They have vast gas bladders filled with hydrogen enabling them to float, elevating them above most danger. They have sail-like tails and large flaps of skin, along their sides, allowing for directional control. Coloration varies by environment, but all have undersides colored for camouflage against the sky. Their jaws are like a cross between a snake's and a whale's, stretching out and then simply being held open to trap anything caught within in a fine mesh of fibers.

As they grow older, they also grow increasingly larger, with new gas sacs growing in a bundle above the previous ones in order to support their weight. They are born in a similar way, by the parent gulper developing a specialised sac within which the young grows. When hatched, they are much smaller, near the size of most sophonts, but the very oldest can be larger than medium sized spaceships.

Cloud-gulpers are a very passive species, mostly drifting with the wind or tacking with their sail-fins. Their method of eating is simply to drift along, filtering and swallowing whatever is trapped by their gigantic mouths. During exceptionally strong winds, the smaller ones may hug the ground and anchor themselves in foliage, while the larger, older specimens simply use their stronger lift to rise far above any possible obstacle. If attacked, they will usually flee, or if an aerial escape is impossible, attempt to grab and crush the assailant with their jaws.

• The species has escaped to many planets due to a company catching them, putting advertisements on their sides and using them as free moving blimps. When the company went out of business it was found out that they had no control over the cloud-gulpers, and as such the wild faunas, many still bearing advertisements would go on to reproduce en masse with no predation.