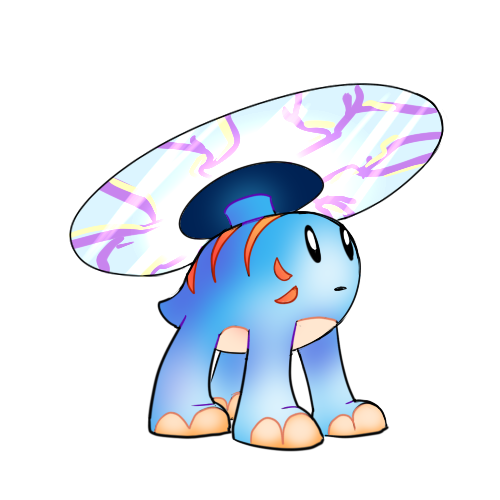 “If you have nothing in your future to look forward to but waiting tables and carrying drinks, this is the starter for you!” — Notail's Guide to Choosing a Starter

Attack Method: Defends its owner to the death using its shell.

Considered a bottom-of-the-barrel capture creature for notail G- and W-classes, the turble is a small, squat creature with a hard shell that protrudes from its back on an extendable stem. Its short legs can extend up to three feet and its shell another foot, although it cannot stretch to its full extent for long without damaging itself. Turbles come in every colour of the rainbow including black and white, with many geometric patterns on their shells, though they always have three stripes on their bodies and two on each cheek.

Their broad, flat feet can stick to almost any surface. No matter the angle of their body their shells stay perfectly level, so they are excellent as a surface for storing things on.

The turble is fiercely loyal to its owner, ready to follow them anywhere and give its life for them at any moment. They can be instructed to extend their legs and shell stalk on command, making them convenient companions for carrying extra baggage. Their shells make somewhat effective blunt weapons, but at their size they're hardly the best option for defense. They are, however, easy to feed and low maintenance, rarely showing discomfort or demanding anything. They rarely even make any sort of noise. Intelligent creatures, they can learn and readily respond to numerous commands without fuss, making them efficient helpers in W and G-class lines of work.

In the wild, turbles live in colonies of up to twenty individuals. During the day they burrow under the sand so only the reflective tops of their shells are visible, shining the glare of the sun into the eyes of predators to deter them. At night they surface to eat the leaves of desert plants, using their stretchable legs to reach higher branches and their sticky feet to climb trees.

Wild Turble: Much noisier than their domestic cousins, these creatures come only in dusty yellows and browns, with pure white shells to better reflect the light of the sun. They are no more aggressive than the domesticated turble, however. They prefer to hide underground rather than attack.

• In the wild, many colonies of turbles band together to migrate to more lush areas, walking sometimes for days without rest. During the day they flow across the sands like streams of light.

• While turbles can be taught to roll over, they are unable to right themselves once on their backs. Only monsters do that to them.