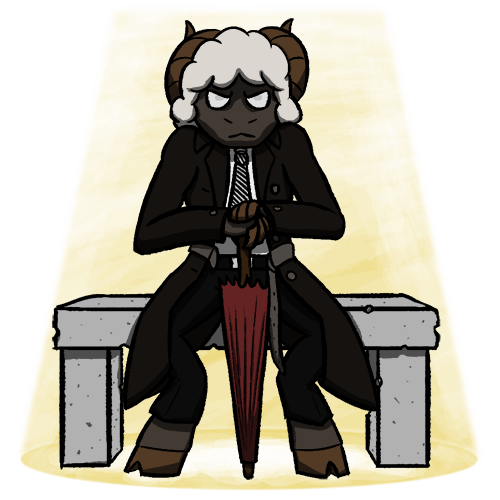 “My boss, he's a very good man. He bought you this lake, he keeps it clean- He even put up a hundred little signs that tell you not to swim. And yet you are too impolite to stop swimming. If I see one more swimming motion from you, I will make sure you never swim again, understand?” — The first and last mafleeca lifeguard

Attack Method: Give a single warning before trying to kill the opponent on the first stike. Large groups hide and try to chip away at the opponent.

The mafleeca are smoke-breathing ovine humanoids with glassy white eyes, brown wool, dark grey skin and hooved legs. They also have a pair of curly horns on their head. The mafleeca always dress for rainy weather, with trenchcoats being more formal than raincoats. The mafleeca consider rain ponchos to be incredibly casual, so it's rare to see them wear it unless it is especially hot and sunny out. The mafleeca don't have any sexual dimorphism, but females usually carry around an umbrella. Thus, umbrellas are considered feminine in mafleeca culture whereas the lack of one is considered more masculine. A mafleeca that identifies as female would consequently be able to disguise themself as a male by going without an umbrella, and vice versa.

Mafleeca can hold their smoke in for quite a while without issue in order to be polite or to be sneaky, though they usually expel their smoke anyway. Some mafleeca take up smoking to increase their smoke output for intimidation purposes.

The older a mafleeca gets, the more they will grow their fur and horns out. Mafleeca may get punished by being shaven clean and having their horns clipped off.

The mafleeca are very group oriented and will become incredibly insecure or paranoid when they're not involved with a group, be it as the president or the janitor. Most don't mind being alone so long as they're acting on a group's behalf, however. Most mafleeca have incredibly tight familial bonds and keep in touch with their relatives. Mafleeca families are always feuding and mafleeca spend most of their early lives unable to trust anybody who is not related to them.

Mafleeca fully mature at the age of 20 but are only fertile between the ages of 80 and 90, and even then they have to navigate through the hostile relations between families to get a suitable mate. When they do succeed in mating, due to their lack of sexual dimorphism, both members involved in the process can birth several large litters of children until they are rendered infertile. Parents hold a lot of sway over their children, and mafleeca grandparents can have a small army of relatives at their call.

While they can become quite old, the average lifespan of a mafleeca is 30 because of their tendency to get into fights. It's even worse on their home planet, where a third of them fail to reach adulthood. A mafleeca's life expectancy actually goes up as they get older, and it shoots up drastically once they start having children.

Mafleeca grow out of larves that hatch from eggs, which they put in the center of large balls of food that the larvea eat through upon birth. The mafleeca have studied the effects of different foods on their spawn and will alter the contents of the balls if they have a shortage of mafleeca with certain skillsets. They have no issue with mafleeca hybrids, but if one were to artificially create pureblooded mafleeca, they would attempt to kill both the creator and their creation to preserve mafleeca culture.

Mafleeca are generally pleasant to be around but they will very quickly turn to lethal force when threathened, or when one undermines the group they've chosen to associate themselves with. A mafleeca toilet lady would pull a knife on someone if they didn't put money in their jar.

Mafleeca love art and tend to collect music, paintings, or sculptures. Mafleeca artists are nearly nonexistent, however, and the race only discovered art after they were introduced to space travel. Mafleeca are usually good at cooking, and will quickly become depressed if they are forced to eat bland food.

Mafleeca generally employ Hypnos units and the Thanatos units that come with them. Because of this, the mafleeca are not fond of robots that won't play music for them. The mafleeca are nocturnal and can see well enough in the dark, but they prefer artificial lighting.

Mafleeca history consists mostly of mafleeca overreacting to slights against their family, and trying to raid and take over the territory of the family that offended them. The mafleeca wars calmed down somewhat after they were discovered by spacefaring species, as they started to respond to overpopulation by sending some of the excess mafleeca into space rather than pursuing territory more aggressively when a family became too big.

While they're still loyal to their families, black-fleeced mafleeca are completely adapted to their own survival as they're willing to eat their peers and spell bad luck for those around them. This is because black-fleeced mafleeca are a survival mechanism. It usually activates if the parent is under great stress or if they are desperate enough to include mafleeca meat in their food balls. Because of the toll that slavery takes on a mafleeca's psyche, this mechanism kicks into high gear with enslaved mafleeca, who will produce entire litters of black-fleeced mafleeca when they're allowed to breed. The larvae from these eggs are hazardous as they eat any organic matter and will not stop eating for days after their food balls run out. For this reason slave traders don't tend to let their mafleeca breed, but rather buy stolen eggs from the mafleeca themselves.

Sleepca: The sleepca is a mafleeca whose skin and fur look washed out, bordering on albinism. They also breathe practically no smoke. Sleepca are incapable of feeling rested and tend to be a lot slower than regular mafleeca because of it. On the flip side, sleepca tend to be less violent than their regular counterparts simply because they don't like to work up the energy to fight.

Strangely enough this tiredness doesn't just affect the sleepca itself: just talking to a sleepca can make someone sleepy. When a sleepca gets older they start to emit soporific smoke from their skin. This forms sort of a second layer of fur on their body and slowly dissipates into the air as a sleep-inducing gas.

Neither the gas nor the passive sleep inducement of a sleepca are normally potent enough to put someone to sleep, but their passive sleep induction stacks when there are more sleepca present. It's theorized that a large enough group of sleepca could put people to sleep simply by being seen. Luckily, these mafleeca are too rare for a single family to possess such a force, and the mafleeca would never unite themselves for long enough to maintain it.

Sleepca can train themselves to weaponize their sleeping gas, but since Hypnos units can already do this better than them they usually choose not to.

Sheeple's wake: Mafleeca are normally not especially light sleepers, but telling a mafleeca to wake up will wake them up immediately without failure.

• Mafleeca will sometimes mistake geckrechauns for close family, and keep insisting that this is true despite all evidence to the contrary until the geckrechaun themself tells them otherwise.

• Occasionally, mafleeca will become homesick when they are off their homeworld and may shower with their coats on to reminisce.

• Mafleeca get very flattered when they're hired as bodyguards. Since they're always willing to fight for their teammates, to them a job as a bodyguard is like being paid just to be around.

• The mafleeca mostly trade with the volkronn, as they both share a willingness to kill over business, not mention a love for warm clothing. Groups that try to mess with the volkronn's ruthless business practices need to be wary for mafleeca hitmen, and the volkron have some ships aiding the mafleecas' understaffed fleet to protect their interests. Even though they look out for one another, having a volkronn as a boss is still draining for most mafleeca, despite their fanaticism. 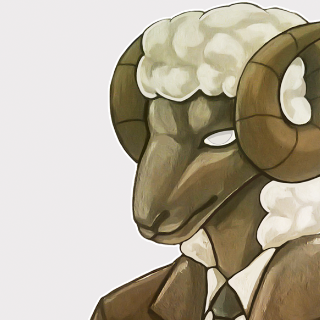