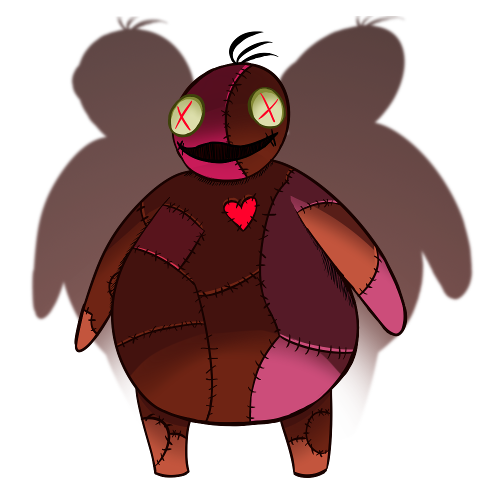 “We are unfashioned creatures, but half made up, if one wiser, better, dearer than ourselves , such a friend ought to be , do not lend his aid to perfectionate our weak and faulty natures.” — Victor, Poppet representative

Attack Method: Prefers to avoid combat, but if pressed will protract concealed needles, and fling itself at the weakest part of the target.

Generally Poppets worship the Weaver, believed to have stitched the first poppet from her skin.

Poppets are composed of organic material filling a humanoid "cloth" sack. The sack is generally tan or brown, and covered in stitches, with large stitches indicating the seams holding the poppet together, and smaller stitches being the poppet equivalent to tattoos. All standard poppets have their name stitched on their lower jaw when they are created, but may choose to remove over the course of their life. A poppets "head" is on the top of the torso, with two bone "button" eyes, and a gash serving as a mouth. Poppets also contain bone needles that they are capable of protracting through the sack, which afterwards the needles will fall out, to make room for new needles to regrow inside the poppet.

Poppets generally have a hard time holding things, as their "hands" have no opposable fingers. Their feet however, are relatively flat weighted circles, to provide support for the poppet as it moves around. A poppets "cloth" is composed of strips of organic material interwoven, and functions as a poppets memory, with each individual strip containing a copy of the poppet's memories. These strips can be exchanged with other poppet's to quickly share information. Respectively, the internal meat serves as the brain, which recycles parts that have spoiled, to make room for fresh meat to be integrated, heart, and voicebox of the poppet.

Poppets have a callous treatment towards life, as the only way to create a new poppet involves the killing or injury of either another poppet, or a suitable living entity with a relatively workable skin, and a decent-sized pile of meat. Incidentally, this tends to net poppets roles where disposal of organic material is involved, and they are always happy to trade a fellow poppet off to passing crew for more supplies, as long as its enough to make another poppet, at least. Generally, they prefer to let other, more friendly races do the talking however.

Rag-Poppets: Rag-Poppets occur when either the standard materials for creating poppets are unavailable, or an immediate source of cheap labor is needed. Rag-Poppets are mostly mindless, but are far stronger, more durable, and very slow compared to normal poppets. Rag-Poppets will, if untended, go "feral" allowing them to be self-sufficient until they receive new orders.

Silk-Poppets: Silk-Poppets occur when a poppet is "touched in the head", usually this leads a poppet to simply go insane, but occasionally one recovers, taking on a new personality and faith based on one of the A.Is. Although these Poppets have no special authority, they generally are highly motivated as a result of their "enlightenment" and will seek to encourage worship of their chosen deity.

Bad Mojo: Bad mojo triggers on the death of any poppet, causing a cloud of bad luck to emit from the poppets corpse, this causes everyone in the area to become unlucky for several minutes. Leaving the cloud before the time is up will end the effect early.

-Back to Species Menu-
< Pon
Prunus >