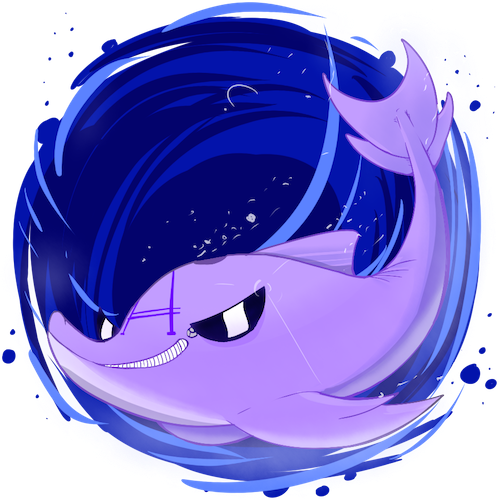 “I'm fairly confident that its actually a dolphin, but what to *I* know.” — Dolphin Biologist

A sizable dolphin-esque creature, measuring around 6-and-a-half feet long from snout to tail, and about a foot around. The upper half of their body comes in a variety of shades of blue and purple, tending more towards softer, pastel shades. Their lower half is typically pale, and often white, especially in their belly. Alpha porpoise have a pair of eyes on either side of their head and a mouth full of pointy rending teeth for eating. Their most distinguishing feature is, of course, the alpha symbol that dominates the front of their face, though it easily mistaken for a simple "A". A peculiar oddity, many alpha porpoises are found with are cybernetics of unknown origins, most commonly in the form of "radical cyborg sunglasses", modern oceanography is boggled.

Alpha poirpose are incredibly excitable and "Type A" creatures. Ever eager to engage in extreme activity for seemingly no purpose at all. Left undisturbed alpha poirposes have been observed performing such "rad" stunts as backflipping, surfing, and coordinated acrobatic feats off of various sorts of handles.

Aside from that alpha poirposes deeply enjoy the thrill of the hunt. They hunt for all manner of reasons, aside from food, such as sport, brinkmanship, and for decidely less wholesome reasons. They are quite smart, for animals, capable of understanding and to a limited degree, engaging, with sapient peoples, who alpha poirposes reportedly consider "uncool hosers." At least that's what one scientist felt like after an alpha poirpose apparently "flipped them off" with its tail, and swam away.

Alpha porpoises gather in large "pods" of at ten to twenty individuals, composing of several families. The coupling rituals of alpha porpoises are reportedly a sight to behold, as they prove their worthiness to potential mates through all manner of "radical" stunts and tests of grit and "coolness." Once so paired, alpha porpoises typically mate for life.

Hydrojet Cutter: Alphas porpoises have the ability to shoot streams of water from their mouths at incredibly high speeds, resembling a waterjet. This stream is more than capable of heavily bruising, if not outright slicing in half, most organic creatures, and a wide range of inorganics.

• Alpha porpoises are really more like dolphins, but all attempts at getting them renamed has been blocked, mostly because the people in charge of such things are deeply confused as to the difference between a porpoise and a dolphin.

• Some religious people believe the alpha porpoise to be a blessed species, and thus an anomaly. The radicalness of the alpha porpoise leads them to feel they are an agent of the Radical Dragon. Others politely ask those people to "stop bringing religion into this and just enjoy the rad creature like everyone else, jeez."

• If one sees an alpha porpoise on its own, they are advised to stay away. It is either an uncool exile who should be shunned, or a stone-cold loner who should be avoided out of shame.

• Alpha porpoises are cooler than you, we're sorry its just a fact of life.