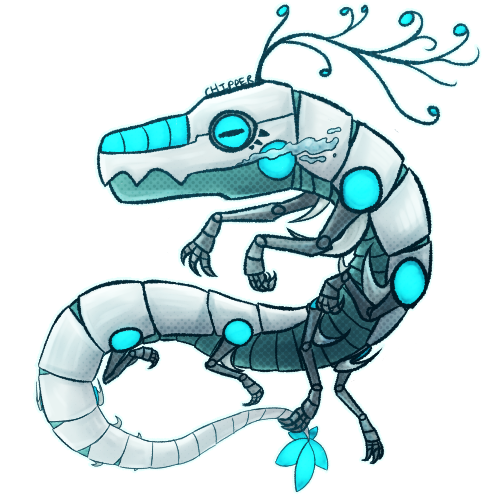 The larger Hypnos ships are known as the "Sandman", while smaller ones are just known as "The Hypnos."

After these first few Hypnos generations, they were greatly changed due to how costly they were to build. The common Hypnos is 6 to 7 feet tall and looks like the skeleton of a lizard-like species. The head and body of them is box-like to allow easy storage.

Both types of Hypnos units have multiple lights on top of their heads as well as a compartment in their heads filled with sleeping gas. When a Hypnos sings someone, or in the case of the large Hypnos units, a whole city, to sleep they are in fact releasing sleeping gas.

There is not much to note about Hypnos units; many of them sleep for large amounts of time and are basically inactive. When Hypnos units are active, however, they normally have a set goal already in mind. They do what they need to do as quickly as possible so they may return to sleep mode.

Talking with a Hypnos is extremely difficult and is normally only achieved by their "brother" unit Thanatos. The speech of a Hypnos unit is greatly garbled and confusing, like a person who has suddenly been woken up in the middle of the night.

While meeting a Hypnos who isn't sleeping is hard, many who do say that Hypnos units are very pleasant company, definitely if they aren't near their brothers.

Hypnos units are feared when they are spotted, for they are the beginning of the end. A large Hypnos unit can spill out enough sleeping gas to knock out most of a smaller city. There is no use for a large Hypnos unit other than this, and as such when its duties are done it will return home to sleep, until the next time a city needs to be put to rest. When the city has been weakened with the sleeping gas, the Hypnos' brother unit, Thanatos, shall swoop in to destroy the city, or take out major buildings and people that hold control over the city.

Smaller Hypnos units jobs are very much the same, but on an understandably smaller scale. Small Hypnos units suddenly rush on to ships, setting everyone to sleep so they may be killed or contained by a Thanatos. Small Hypnos can also be kept around for personal usage, such as helping someone with a sleep disorder getting to sleep, but one should be warned, a Hypnos unit always calls out to its brother. A Thanatos unit, unless killed, will always figure out where its brother unit is given enough time, and the results can be deadly.

As war bots, a Hypnos and Thanatos would not know what to do if let go. Both are ill equipped to live on their own, and sadly this can lead to both robots attacking and stealing from others if they need supplies. Unless the original owner, or company comes to pick up the robots they will both fight and attempt escape from anyone who tries to trap them.

Thanatos: Thanatos is Hypnos brother and will protect him whenever possible, because of this Hypnos knows he can always have a good sleep as Thanatos would never let anything happen to him. While Hypnos is scared of Thanatos due to his yelling and such, he'd never hold that against him, knowing that Thanatos is trying his best to not be scary.

Hypnos is the god of sleep, and thus controls how much and or how little people sleep. It's a simple task that Hypnos doesn't mess with, but if for some reason Hypnos was taken away from the universe, it is possible that many people would go into a deep sleep they are unlikely to wake from. Sleeping sicknesses could ravage the universe, causing people to sleep too much or too little. Hypnos also has some minor control over dreams, sometimes going out of his way to appear in dreams to give certain people messages.

As the player's patron, Hypnos wouldn't give much advice, as he's sure the player knows what they're doing. Instead Hypnos gives the player's characters a well rested bonus if they go to sleep at proper times and sleep for the correct amount of hours. This bonus gives everyone a minor stat boost, and improves morale and sanity by just a little bit each time. Simple and easy to understand, just like Hypnos likes it.

Hypnos may put characters to sleep just because "They looked tired to him."

Godheads of Hypnos are more likely to have antlers and more arms. Other than this they are sleepy beings, appearing to sleepwalk their way through life. They are pacifists, and if attacked, they will touch the attacker, putting them to sleep instantly. They can do this twice a day, to anyone they please.

While Hypnos ships are able to carry 2000 people if empty, this is not normally the case. In fact most large Hypnos ships instead carry about 100 people, with the rest being the sleeping gas that will be used in the attack. The crew of the Hypnos must be careful to not accidentally release the gas, or everyone on the ship can be overwhelmed with a deadly amount of concentrated sleeping gas.

• Hypnos units are known for making instrument noises. What instrument noise a Hypnos picks to make is fairly random from Hypnos to Hypnos, with some making trumpet noises, others making soft bell noises, and some even making bird noises.

• When a large Hypnos ship runs out of fuel too early it will lock its entrance, curl up and shut down, making it hard to get inside it without using brute force. As Hypnos appear before Thanatos units do, the Thanatos unit will come down to save their brother unit as soon as possible.

• There are later gens of Hypnos units that aren't always asleep, but sadly people assumed that these were bootlegs due to their lack of sleep, and strange way they acted compared to a normal Hypnos. As such after being unable to sell the non sleepy Hypnos units as well as the sleeping ones, they discontinued making them.