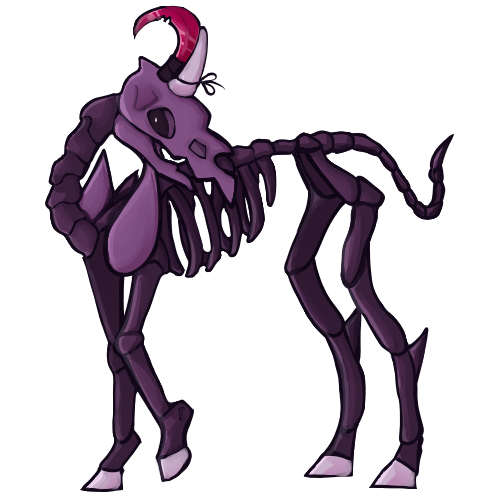 “The reports of my murders have been greatly exaggerated.....mostly.” — Cronus

Likes: Debates, Investments, Lack of change, Helping people improve
Dislikes: Children, Young people, Change, New things
Attack Method: Cronus units dip their head down and slice through their victims with their horns. If that doesn't kill them the trampling afterwards will.

The common Cronus ship is called the "Unicron", due to the single "horn" coming out the top of it.

Trotting in with its adorable looks is the Cronus unit. They are incredibly friendly-looking, frequently wearing mascot suits to hide what they truly look like. Wearing these friendly looking costumes helps people underestimate them and forget about the underlying and darker tones of the AI. Under every Cronus unit's suit is a quadruped unicorn-like skeleton. Cronus always come in dark tones of every color with purple and red being the most common.

The skeleton of the Cronus units is, in fact, the entire unit, the suits are just a disguise. These skeletons are remarkably hard to break, being able to withstand direct attacks with blunt weapons without much any damage. The feet of Cronus units are either sharp claws or hooves. The Cronus unit can move at incredible speeds with either one. Finally on the top of all Cronus units' heads is a sharp horn which they use to stab, disembowel, or shoot lasers out of. The horn is considered a status symbol for a Cronus unit, with more prominent and detailed horns signifying the unit is better than others.

Cronus units can mainly be described in one word, "fabulous." Cronus units hold themselves high and prance around in order to attract attention. They are chatty and attempt to make friends wherever they go; most succeed in this goal. They will attempt to give good life advice to help correct someone's life and surprisingly, more often than not this advice will truly help the person. From most people's perspective the Cronus units are truly gentle giants.

Until any child is introduced into the situation. Once a small child is spotted by any Cronus, they become manipulative to the people around them and aggressive. Cronus units will begin asking for their favors to be "paid back" by anyone they have helped in the past. They will edge their way over to the child until they can finally kill them. After this situation the Cronus unit will revert back to its usual ways and they will pretend nothing happened, normally denying the situation outright or making up stories about what really happened to the child.

Do to the horrible acts Cronus units commit, none of them are allowed in areas children may be found, making them commonly totally space-bound or on planets that do not allow children to exist on them.

The reason Cronus units are like this is due to the rather horrific job they were made to do.

The Cronus unit's original purpose and the purpose it is still used in many places today is as a child remover. On long space missions exploring other planets or even attempting to set up a new permanent resident, there are bound to be children created. In a section of the universe were resources are highly limited and sending a child back would cost too much, there's the Cronus unit. Cronus units are kept away from maternity wards and other locations where groups take care and raise their child to avoid the risk of accidental death.

If a child was an unnecessary birth, was miscalculated into the ration requirements of the group, will be unable to survive without medication the crew lacks, or in some extreme cases is just "too much of a troublemaker" the Cronus unit is brought in. Many call using the Cronus unit a coward's move, stating that if people need to remove children created, they should do it themselves, but the Cronus unit still exists for a reason.

While it has lost popularity with new colony startups, it is still a staple of hybrid machine labs. As many hybrids are utter failures or are in surplus because many had to be made at once in case of failure someone will have to dispose of them. The Cronus is let into the area after all the hybrids that are wanted are remove. The Cronus is quick with removal, but the action is still profoundly cruel.

Cronus units work fine in homes, and in large stations. They don't continue their typical work in household situations, but their programming is so ingrained into them that they still may become violent around children. The reasoning behind them suddenly going from docile to manipulative when dealing with children is solely because of dealing with adults. Some may start to regret ordering a Cronus unit to remove all the child and attempt to stop the murder. The Cronus' words try to guilt the person into giving up their plans.

Other than for murderous reasons, Cronus units can take a wide array of jobs if they can find a planet that allows them. They make fantastic leaders and planners, which is another reason why they're apart of start-up colonies, and their talents are numerous.

But the past attached to them? Unforgivable.

Non titan gods: Gods who are not titans are rather scared of Cronus but hide their fear with continually mocking him and his gruesome habits. They will also joke about his fear of children as well. If Cronus does ever approach them, their jokes will melt away, and many of the gods will attempt to flee as they fear Cronus' power.

Titans: Many of the titans love Cronus, after all, he once was their leader. They see him as the better leader compared to Zeus and will gladly note that they don't care about the murders of young NPCs. Cronus brought a golden age to the titans when he was in power, and to them, that's all that matters.

Rhea: Rhea is Cronus' wife, and he loves her and her affection towards NPCs with all of his lack of a heart. He just really wishes she would stop making new species and fauna that everyone knows will never be accepted by the universe. The comment "Rhea, honey, no" has been echoed by Cronus for years and yet she refuses to stop.

Zeus: The current leader of the Greeks, Zeus forcefully took control after a major fight with Cronus. Cronus was forever banished from being around most of the Greek gods and sent to Tartarus. Zeus still fears Cronus, remembering the actions he had committed, but if the time comes where Cronus rises again Zeus is ready to once again fight him back to Tartarus.

NPCs: Ironically Cronus loves NPCs just as much as he loves the Greek gods. He hates to see any of them hurt and is always willing to help out an NPC in trouble. He preaches to other gods to not be so uncaring to them...unless they're children.

As a god of harvest, Cronus has the power over the gains from crops. He doesn't control how well vegetation grows, or if life even blooms from soils, those are jobs for other deities. No, Cronus is specifically the controller of the loot drop system. This may seem to be a joke for a great god like Cronus to be a controller for loot drops, especially those of food drops. One must remember that if a lack of control ruins the loot drop system, loot could pour out in masses, overflowing the system, or worse, things that should drop a certain amount of loot may become highly limited. Rows and rows of rice fields only giving one grain of rice per plant could quickly lead to mass famine and eventual death in the universe.

As a patron, Cronus will be able to tell the player the type of loot, and the chances that it drops from any given object or person. If the player has a particular item they're looking for Cronus can tell them what has a chance of dropping that certain type of loot. Once per day the player may activate Cronus' "Golden age" ability. This ability ups the amount of loot that drops and raises the chance of rarer loot appearing. The ability only lasts a short amount of time so it must be timed right to get the most out of it.

The last power Cronus has is his own presence. The titans love Cronus, and as such, the usually recluse deities are more likely to appear as long as Cronus is around.

With one to two horns upon their heads and black sclera, Cronus godheads can stick out in the middle of a crowd. If they lacked a tail before becoming a godhead they will gain a long thin tail that ends in a bulb, much like those on a donkey.

These godheads will gain a sickle that can be resummoned to them after a day if it becomes lost. If the sickle is used on crops, the crops will drop more resources than usual. If it is used on people or animal, the loot that is normally dropped with be improved. This type of godhead is also able to sniff out hidden loot areas, such as chests buried under the ground.

The horn of the Cronus is a multitool that can have different abilities, Cronus unit to Cronus unit. Some might be lasers, other knives, and still some others wireless network hotspots or even all of the above. Cronus units are proud of their horns and will have it upgraded all the time to add more usages to it. Losing one's horn is considered a great and utter shame in the Cronus community.

• Oddly enough, when asking a Cronus unit how they feel about children, they will typically remark that they have a fear of children. Cronus units have an intense built-in paranoia that leads them to believe that all children will grow up to change everything for the worse.

• Cronus units are most easily found on planets controlled by robots. Robots are not counted as children in the mind of a Cronus, and robots typically disallow procreation by organics on their planets to avoid a natural takeover by their living citizens as AIs are unable to create more of themselves.

• Despite the stereotype, Cronus units do not go out of their way to locate people to murder.