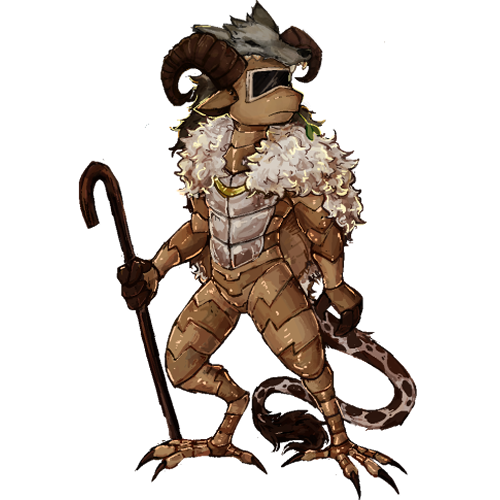 “Ay, so now that the appalling wolf has been thrown out maybe we can get back to roll call, my flock?” — Pales counting their herd of sheep

Likes: Teamwork, Peaceful debates, Compromises, Hard work, Farms
Dislikes: Arguments, That thing people do where they decide to both yell at each other while not listening to the other
Attack Method: Pales stays out of fights, rather helping to plan for a battle. If forced in a fight Pales will kick the attacker and attempt to get away. A Pales unit will fight to the death to protect their flock

The common Pales is called the "Shepherd" as it is commonly used as a ship that makes sure all the other ships in the "herd" do not get lost, as well as helping inform the rest of the herd of any issues a single ship may have.

Pales units are bipedal and tend to look like a mix of a few animals. Many Pales units have bird-like legs, the tail of a mammal and the head of a goat. Many Pales will wear the furs of certain hunters to show their accomplishments. For example, a Pales who protects their herd from wolves and manages to defeat one may decide to wear the defeated wolf on their head. Many Pales will also don the fur or scales of their herd animal if they have any. Though these furs or scales always come from a natural death.

Most Pales units do not have any sort of mouth and as such will normally draw on a mouth as a form of expressing themselves. They do not express themselves very much.

Pales units are extremely calm AIs - they are able to think clearly in even the most dire of situations, such as ship attacks. Their calmness makes them great drivers and also wonderful herders. To add on to their collectedness, they are extremely patient, able to wait long periods of time without complaining or survive family reunions without breaking a metaphorical sweat.

Pales units are herders by "nature" and when they do not have animals or a job that requires herding they may end up herding whatever is around them, such as co-workers. Most Pales units will call everyone they know by names of animals and will dub the people they work with their flock, even if they are not the leader of this flock.

Pales units can be highly defensive about their flock and even if they complain their flock is rowdy, they are still loyal to them. If their flock is ever attacked and the Pales has a chance to defend, they will use their strong legs or sharp claws on those who oppose them. The legs of a Pales are powerful enough to snap the bones of most species.

Pales units are used for flock control, though in this usage of the word flock can refer to any group of animated beings. Pales units will shepherd animals, robots, ships, and even most species. This shepherding commonly comes in the form of making sure groups of people interact on friendly, or at least tolerant grounds with each other. Pales units tend to be the middle ground for arguments and debates, with the Pales unit calling out when someone is being too aggressive or controlling in the situation, or when someone is being too passive and not speaking their mind, thus prolonging the issue.

While some may believe that Pales units would do well in a situation where they are not constantly followed by a flock of people they have to take care of, this is quite far from the truth. No matter how much a Pales unit seems to be disgruntled about their flock, they absolutely cannot be without them. It is fairly cruel to keep a Pales in a small household situation where the Pales has no flock to take care of and thus it is not recommended. Without a flock, the Pales may show signs of agitation and boredom, but never aggression.

Some people do temporarily hire Pales units to enter their house for a few weeks and point out the issues going on in a household that's being ruined by arguments and aggression.

The gods in general: Pales feels that the gods are putting up borders and getting in fights with each other for no good reason.

Pales job is not overly universe controlling like many gods, instead Pales simply serves as a personal organizers for the gods. Pales is extremely good at locating gods to herd them into meetings, and Pales level headedness which is a rarity among the gods, means they can work with arguing gods to find a middle ground, or tangle them out of situations.

As a patron Pales will cause others gods to be more sociable with the player, most commonly gods who, without Pales being around would have just fled or hid from the player even without a reason. Pales can make getting these rarer and more exclusive gods just a bit easier. At max friendship level Pales can take use "public service." This power removes all gods from all your patron slots and replaces them with gods who are on probation for doing wrongful deeds. Like this, the player will be able to use these gods and have a fair bit of control over them than normal as the gods tend to be attempting to get out on good behavior.

This power can be used for a full planet, but then must be cooled down for one planet. After the power is finished Pales will return to your patron slot as the public service workers leave, but if the player had another god in their other slot, they will not come back automatically.

Godheads of Pales commonly have horns, and an animal fur they wear on their head. Pales godheads make controlling groups easier through the power of suggestions and rational explanation, as well as a soothing voice. As long as a Pales godhead is around crews who would commonly be met with more aggressive forces, may instead be met with more people who, instead of shooting to get what they want, will debate about why they deserve something more than others. Fewer fights are likely to break out around this godhead.

Pales seems to have some sort of attractive force on other gods. If a god is near Pales and doesn't know what to do they will flock over to Pales to ask for advice, even if Pales doesn't know them. Something about Pales makes them very homey, is what most gods will say.

• Pales v1 owns a hyperactive hound dog named Ginger, who helps wrangle their herd by barking at them. Ginger is mischievous and often moves around everyday objects of Pales'. This results in endless headaches for Pales, and boundless laughter for any other onlookers.

• Pales units love sheep. They think they're amazing to herd.

• Rarely a Pales will herd an unconventional herd, such as a herd of wolves or alligators, though many times this isn't met with the best success. 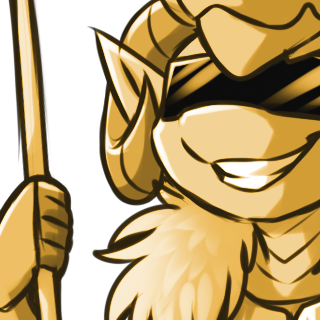