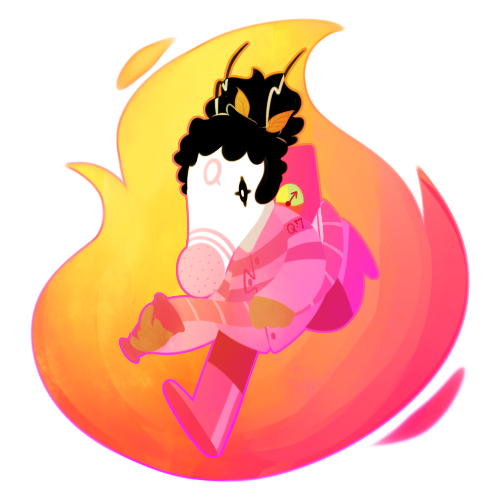 “You may have burned my house, my workplace, my family and also my goldfish, but you'll never be able to burn me down!” — Famous Last Words 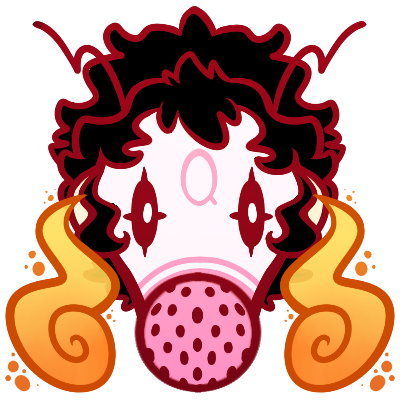 [Cute] Positive trait
Aww, well aren't you just precious! People are easily endeared to this character with their puppy-like look. Their presence is often additionally capable of increasing morale for the crew, assuming they like sweet things.
[Jack of Trades] Positive trait
This character knows about a lot and if the situation calls for it they are able to do many things outside of their job title with no formal education on the subject. This character will not be the best at it or particularly good but will be able to do it.
[Gossiper] Neutral trait
Whatever the situation, you can bet this character has heard (or wants to hear) the lowdown. Whether or not it's reliable info is another story. Characters with this trait tend to be very chatty.
[Masochist] Neutral trait
This character is just wired up a little differently from most. They gain some morale when hurt.
[Flamecaller] Negative trait
This character will accidently set objects around them on fire or will summon fire by accident.
[Pushover] Negative trait
This character finds it hard to refuse orders or requests from others, and is easily persuaded to perform tasks.
[Immolation] Ability trait
For a short duration, this character can set themselves on fire and will only sustain minor burns in the process. Outside sources of heat will not hurt this character while this ability is active.

Q-7 can be recognized due to many factors; he is small, even for a notail, often has small burns on his body, and in the viewpoint of various regions of the universe, he can be considered extremely cute. Of course, there are people who always forget some small details about him that, while important, aren't usually mentioned, such as his always-handy flamethrower or his light burnt smell that makes people understand his title of "Bonfire" a bit too late. He always has his antennas in an upward arc shape. Q-7 sometimes decorates his own hair with things he finds on the floor, such as a few leaves, a feather, a hand grenade, a few phosphorus matches, and various other things that can fit into his slightly charred hair.

With generally tanned skin if not somewhat singed, Q-7 constantly wears a pink poncho or fireproof clothing when he's working, often with extremely strong colors. These clothes usually cover his entire body, rarely leaving any part exposed beyond the head. Secured on Q-7's back is a flamethrower with the same relatively bad taste of colors as his clothes. Although half the universe doubts or does not appreciate much of his taste in fashion, it's always good to be the most noticed thing in the room, and also, the only person with a lethal weapon.

Despite the fragility he often presents, only emphasized by his small size, it should not be overlooked that he is extremely strong for a normal notail and decent in hand-to-hand combat. But the greatest trait he can use is in the skin. Coincidentally he mutated to be much more resistant to fire than the normal person, and surprisingly, it's not very uncommon for him to abuse these qualities and try to ignite himself while attacking. Although he may survive the ordeal, his enemies often don't find themselves so lucky.

Q-7's mask is exactly like a gas mask, but with a pastel rose tone and a Q written in the forehead. He usually does the ‘o’ signature, but it's not uncommon to see him sometimes doing +o+ as well.

Q-7 is rather polite, albeit lonely, for a Q-class notail, rarely gossiping with others and always trying to not insult anyone. Ironically, he's always the first to seek any type of chitchat related to famous people, co-workers, or himself, always expecting to hear something positive or great about anything important he did. That's what Q-7 hunts, respect, and he will always try to get it, be it by good manners, or bad ones near certain people.

Usually attempting to look competent near his co-workers, Q-7 will always try to give off an almost-perfect image near everyone he meets - unless he's at work. At work, he tries to burn people if they go against any sort of order. He doesn't care about looking incompetent or burning anyone innocent, because deep-down, anyone can be deadly if they are alive near an extremely contagious sickness or any sort of anomaly. Not following orders can quickly cause a breach that could kill millions in the worst cases, this is why he lacks respect for these people. The innocents who get infected will just have to go with them. It's all apart of the job.

Q-7 only hates one thing more than diseases, clockworks, and any kind of anomaly that appears. Well, that and that and being wrong about a subject or terribly bad at an activity. Q-7 will always seek to be at least average if not great at his tasks, and if brought up he can be easily offended by questionings about his set of skills or anything that implies that he is bad. This even occurs if he's actually good at something. Q-7's way of responding to any kind of questioning is being quiet and changing the subject.

The truth is more complex and constantly goes in a circle. Q-7 gets insulted, Q-7 changes the subject, Q-7 becomes insecure about the subject and so Q-7 trains in the subject until he gets good at it. This happens many times even in the span of just a month and due to this he is constantly gaining a robust set of skills.

Q-7 doesn't validate people a lot, even if he does respect everyone to a degree he really doesn't like people that try to be like him.

Q-7 was born as a normal Q-class with a slight skin mutation. Rather shy as a kid, he was more reserved than most Q-classes, even when he got out of the woods. Instead of heading into the field with other Q-classes, he would do paperwork and deal with small epidemics around the universe, helping at containing them. The illness he worked with did not need to be dealt with using fire or death, just with a nice vaccine and a strong pointy stick.

The problem began when he was mistakenly sent to another type of mission related to something far worse, an anomaly. It was obviously a mistake; a few notails that worked there definitely could have noticed and stopped it all, but luck seemed to demand that Q-7 be there. Even seeing the mistake himself, Q-7 still went off to this mission.

And there, like a funny joke told by the Neo itself, he was supposed to die, and yet he somehow survived. It seemed as if someone stopped the Neo to tell an even funnier joke than that to deal with its morbid sense of humor. Killing the anomaly went just fine, almost nobody died due to it except for a few civilians and one or two Q-classes that made lethal mistakes.

Q-7 survived and went back to the paperwork like nothing happened, yet, he was sent to work against clockworks or anomalous office tools more and more often. It still appeared to be a mistake that this was happening, but he didn't fight it too hard. One day he just gave up his normal job of paperwork filing to try and achieve something bigger and more respectable. Nobody noticed that he left to begin with so no one cared.

He grew into the job, higher and higher he went. Every promotion earned him more respect, and as he gained this respect, it made him only want more. After a few years in the field, Q-7 got a stable role as second-in-command. He gladly took it the role, getting better at hunting anomalies and dealing with his job. Life was good at that moment. Then his boss, the former Q-7, was sent to church after going into a frenzy where they ripped themself up and needed to be restrained to stop. It was expected they would recover in a few months or less and then come back to work. This did not happen.

Once they all saw that the old Q-7 wouldn't be able to leave the church anytime soon, Q-7 was swiftly given the role of being the Q-class leader due to being the second-in-command at the time. He was glad at first but forgot a single problem in this equation. Any mistake that the people under him do can be related to him now, forcing him to always hope that nobody commits any mistakes at work.

.....And hoping that this anyone wasn't him.

Work Harder, Not Smarter: Q-7 has a whole set of skills that quickly changes over time. Such as basic cooking skills or committing a clean murder, he is always up to show anyone that asks that he can do the job. He usually uses these sets of skills on his missions such as when he's dealing with anomalies. Due to this Q-7 seems to always have a fairly decent ability at most skills, even some many have never heard of. Q-7 is rarely a pro though, seeming average or even bad at the skill compared to someone with natural talent or one who has trained for years in the skill. It'll do though.

• Q-7's old capture creature died during a failed attempt at using evofluid. Nowadays he owns an evolved stakil that lives at his home. He calls him "Mimey ‘o’".