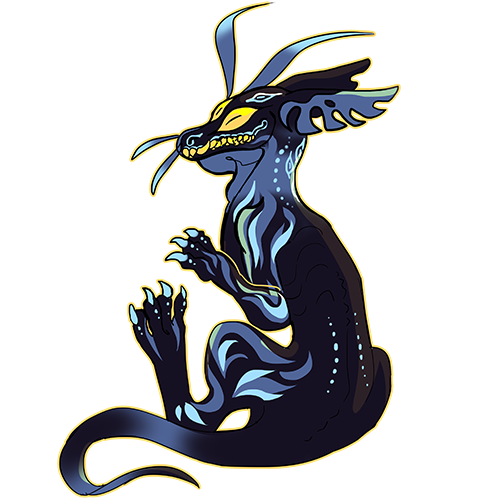 “Man, I am so glad I brought my lizard to the lesson today. He was talking so fast I barely understood a thing! If you need the notes, just take out your heer, and I'll have mine save the lecture to yours.” — Student using a heer to record notes

Danger Level: Low
Likes: Noise, Being petted on the back, Music
Dislikes: Silence, Being placed in small pockets

Attack Method: Heers do not fight if attacked, instead opting for hiding in behind their owner. The original species the heers came from, known as the seers, are large enough to use their powerful jaws to overpower those they meet and intelligent enough to wield and toss rocks.

Heers are small handheld reptiles with relatively large cone ears and three eyes, with one being placed on the center of their head. Common to all heers are symbols on the back or one side correlating to record, stop, playback, fast forward, and rewind. They come in an extensive arrangement of colors, both naturally bred and painted on, allowing buyers to obtain heers that match their personal style.

While heers are usually stiff and frozen in place, they can stand up, but not walk, on their hind legs. Their tail also swings wildly when sensing danger, and even mild pressure forced upon it will cause it to break off, at which point it will not regrow.

These bio-machines are static in motion, yet ever observant. They do not travel except in extreme cases, and other than the flickering of a tail, a waggle of the ears, and the eating of food placed in front of it, they do not move.

Their fast brains are no more highlighted than when their owner tells them to search for a phrase. With three taps to the back and a string of words, they search through their entire memory, which can hold 131400 hours of info, longer than their own lifespan. In less than three seconds, they will repeat the results of the query. Some even have names, and if their name is said, they will listen for a command. This can become annoying if the owner assigns a common name to them.

Owning two heers at the same time is considered best, as it is possible for one to die. Transferring info from one heer to the other is easy, have one of them record, while the other plays back. When one heer notices another directly next to them during the event, their playback will increase to x1000 normal speed. Despite the high speeds, the recording heer will catch every bit of info and be able to retell it at normal rates.

Seer: These are the bigger relatives to the heers. They can remember both visual and audio info with shocking detail and, with enough paint, can create photo-realistic versions of a significant event they saw. Their feral cousins were turned into the heers. While there seems to have been discussions about turning the seers into automatic art machines, it has been decided they are too intelligent to avoid a media circus. Currently, seers can only be found on an undisclosed planet in the lawless sector, or at least this was assumed to be the fact. Recent sightings implied pirates have obtained, and have begun to transfer them to other sections of the lawless sector.

Lockeer: Special heers who visually identify their owner before disclosing any info. If the owner disappears, only the manufacturer can use a secret codeword to get them to speak again.

Flawless memory: Except in cases of head damage, heers are able to remember every sound they have recorded.

• If not fed for a few days, the next time a hand goes to touch them, they will swing around, bite, and chew on it. While it is easy to get them to release, the whole event is unpleasant as their teeth are sharp enough to draw blood.

• Every time two heers meet each other for the first time, there's a 5% chance that they will both begin to do pushups for one to ten minutes, at which point the action will subside. This whole event can be ignored and is labeled as an "out of date natural reaction" in the operation manual.

• It has been ruled in many courts that heers are admissible as evidence. Before this, they were considered "witnesses" and would have to take the stand to give testimony.

-Back to Fauna Menu-
< Handrosphinx
Horse >