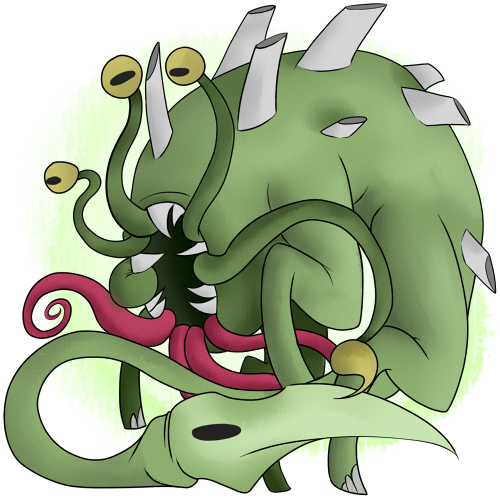 Attack Method: Ambush. Quick strike with venomous claws then retreat to wait for toxins to set in, or use of disfiguring weapons against those who are immune (such as other Aoeyoi'ie).

[Takes Cat Naps] Neutral trait
Character is neither fully [Diurnal] or [Nocturnal], but instead is mostly awake during the transitionary periods between the two.
[Can Eat Trash] Positive trait
This character takes no penalties from eating rotten or rancid rations. In fact, it's good for them.
[Short Fuse] Negative trait
Although a character with this trait might be normally friendly, it does not take much to provoke them. If you prod at or question their beliefs, ideas, or otherwise challenge them, be prepared for them to lash out. A character with this trait can have trouble taking criticism well.

Aoeyoi'ie tend to not believe too highly in to gods but when they do they change their god all the time.

The aoeyoi'ie are large bulky quadrupeds. Instead of a head, their 'face' is on their backside. At the center is an O-shaped mouth containing several rows of teeth. Nine long tentacle-like appendages emerge around this mouth; three of them serve as eyes, three are for tasks such as feeling, smelling, handling tools, feeding themselves etc. and the last three are especially bulky ones that bear sharp venomous claws. The mouth serves only as a food receptacle.

Breathing takes place via short pipes found protruding from random points around their body. These pipes contain vibrating membranes that are used to speak. Their natural language is achieved by producing vowel sequences with their tubular membranes and by snapping their feelers in various ways. Since most species have a greater breadth of sounds, space-faring aoeyoi'ie usually have one or more speech synthesizers attached to their breathing pipes.

Aoeyoi'ie are fairly emotional creatures, being easy to anger, please or scare, though their natural personality variance also accounts for more phlegmatic individuals. They are relatively intelligent, but are more likely to be found doing jobs related to maintenance or with a certain element of repetition than in positions that require leadership or creativity. They make especially good janitors due to their incredible ability to process almost anything by eating them.

Aoeyoi'ies will eat anything - this even includes trash. The obvious exception to this are radioactive materials, which will kill them just as easily as most other living beings, and large enough chunks of certain heavy metals.

Their home planet, Oa'eie was discovered by space-faring community in a small system surrounding a young yellow star. Its most intelligent species, the aoeyoi'ie, had achieved Iron Age technology at most. Much of the species was living more primitively then this. The species was then progressively introduced to the Space Age, to which they eagerly adapted.

• Most ruling groups readily accepted the introduction of space age technology, as it would allow them the ability to out-compete other Aoeyoi'ie cultural groups, though many individuals and some groups resisted.

• A Didaskaloi scholar notes that there were about 126 to 131 different distinct cultural groups (minimum 2,000 individuals) at the time Oa'eie was first discovered by an interstellar crew. This decreased to 120-124 due to inter-cultural conflicts during the short period between contact and Notails finding out about the Aoeyoi'ie, then 70-72 different groups between the Notail judgment of Aoeyoi'ie as abominations and Didaskaloi diplomatic intervention. There are currently 65 distinct cultural groups; 58 of them are in communication with each other and 52 of them have declared willingness to engage in interstellar travel.

• The most advanced cultural group of Aoeyoi'ie, the Ao'eiUu, comprised about 20% of the total Aoeyoi'ie population at the point of first contact. They now comprise 61%.

• Aoeyoi'ie will place objects in indoor and outdoor settings they travel often to diminish the discomfort they feel in open, unbroken spaces.

• The largest single object ever recorded having been eaten by an Aoeyoi'ie in one sitting is a 6ft x 4ft x 3 ft vending machine, eaten inside a ZapFast fuel stop as a promotional event for the fuel station chain. The vending machine was an out-of-order Freshie's fruit pie vending machine. The eater's name was O'eAA e. They ate the machine in a time of 2 hrs 30 min, using only the assistance of a claw hammer.

-Back to Species Menu-
< Angel
Apidee >