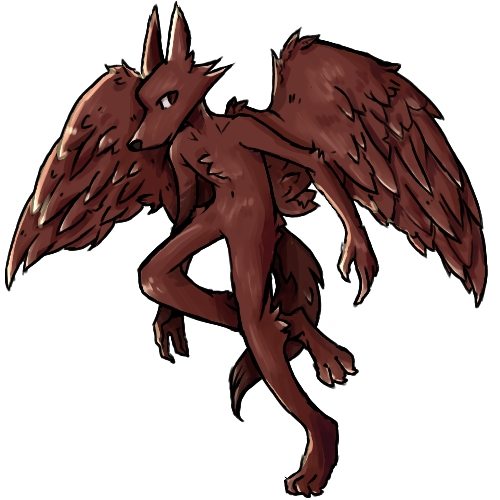 Attack Method: Get em in one shot or retreat.

[Musician] Neutral trait
They just are naturals at music.
[Adaptive] Positive trait
Wolrids can handle most environments, given time. This is the thing that saved them from extinction.
[Classist] Negative trait
Wolrids judge people based on rank, when pro monarchical.

No god, as they were introduced to science before they had a chance to even think of making a religion and the wolrids consider science their "god."

Wolrids are bipedal canines with wings. It is rare to see a wolrid with two sets of wings. Wolrids are either born with bright green blood, dark green blood, or purple blood, from most common to least. These blood colors dictate where the wolrid sits in their caste system, with dark greens at the bottom, and purples at the top.

As the homeworld of the wolrid is quite radioactive the wolrids typically carry radioactive elements in their fur and body. A good wash removes most of these but prolonged exposure to wolrids, especially those who have just left their homeworld is not advised. Wolrids have three biological sexes possible at birth, this being male, female, and host. A female and male wolrid can impregnate any viable host to carry the baby.

The wolrids are a peaceful race when it comes to fighting amongst themselves for territory, and is generally settled with dialogue. However when other species get in their way, which is not often, it is an entirely different story.

They are used to a caste system if they are part of the monarchical government, and will get confused when they aren't treated as "What they are", but if part of the democratic government they will expect to not be stereotyped.

The wolrids where first contacted by a species who has now gone extinct and gave them access to technology far ahead what the wolrids had at the time. In fact, it was so early in wolrid development that they hadn't even begun making anything more than stone tools. They were fascinated by the concept of music that the other species had introduced and started making their own. They now are known throughout the galaxy for their technology heavy music. When first discovered by the notail, the wolrids had an uneasy feeling, so they started making weapons in case they needed them.

Hearing about all the awful things the notails had done the wolrids decided to attack the notails unprompted, a move that was considered highly foolish, especially as the notails had yet to commit any acts of aggression towards the wolrids yet. It was during the great wolrid & notail war, a war that only lasted a month, the wolrid's planet became highly irradiated and they lost. Many wolrids died to their now toxic planet but those who lived became quite immune to radiation. Currently their planet has multiple rulers and is also divided when it comes to the democratics and monarchs.

Their home planet, Ivacanous (Eh-vah-can-nous), is a wold ravaged by radiation. The wolrids are able to handle this radiation, except at the 40000km wide crater where the nuke brushed their planet when they nuked the notails about to enslave them. Other than this, there is nothing noteworthy except the city dedicated to music, "Technoland."

Iridium blood: These are the kings and queens of the wolrids and always are a purplish color but almost nothing distinguishes them physically from normal wolrids.

Kitsune: These are a caste lower than iridium and are always white. They are more agile and and can see far more colors than the typical wolrid. It is traditional for them to have makeup that makes it appear that smoke is coming out of their eyes.

Onyx: The onyx are the lowest class of wolrid due to their dark green blood. They have a stigma revolving around them that they are hyper-violent, but this is the exact opposite of the truth, as most try to settle all conflicts with peace first.

Sensitive Learner: When they are trying something new, such as cooking, if they get harsh criticism on the first few meals they make, they will curl up in a ball and bawl. If they are a seasoned chef and receive the same criticism, they will react to it what would be considered by the universe to be "normal."

• Wolrids and husse never get along. This is not known why but it just is.

• Wolrids make their own AI intended to be lead singers in their bands, usually custom made, but there are some mass produced models.