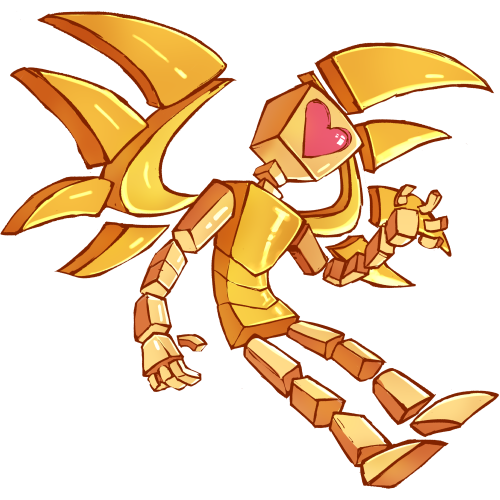 Likes: Romance, Love, Gatherings of people, Peace, Lewd jokes
Dislikes: Fights, Serious hate, Too many responsibilities, People who can't handle jokes about themselves
Attack Method: Eros refuses to attack if possible, instead attempting to calm down the person or manipulate them to turn on their friends. If this cannot be done, Eros will attempt to scratch at them. It that doesn't scare them, he'll flee and hide behind friends.

The common Eros is called the "Matchmaker," a pun on the fact that it's the ship of a matchmaking AI, and that it's made of the scrapped remains of other ships. Many try to paint their ships to look stylish despite their rather poor origins. No one ever knows what to expect when buying a new Eros ship. It could be made of parts from a real high-class ship, or well, the lowest of the low.

Consorts of Eros get +5 to charisma.

When AIs are being built some parts just don't work out as intended, were painted incorrectly, or just too many were made. These parts are tossed into the rejected bin, to be scrapped later. One day someone took pity on a pile of rejected parts and refurbished them into their own AI, painting each part the same color and affixing a screen to the head. This was the start of a new generation of AIs, the Eros unit.

Every single Eros is made of the spare rejected parts laying about, meaning that every single Eros is unique in appearance. Every Eros does have similar agreed on features though. For one an Eros unit may not be taller than 6'5 feet and no smaller than 4 feet. Every Eros must only have two legs but may have two to four arms. An Eros unit must also have two to four wings, and lastly, an Eros must have a screen on their face displaying a symbol. It should be stated that these required sections do not need to be made of what is common for them. For example, the legs can be made of tossed away arms, and nothing is truly stopping anyone from having the head made of a large hand with a screen affixed to it. Many Eros units have their parts floating and unattached to each other physically, but this is not a requirement.

A bit of a joke, that is what an Eros is. With an excited personality, and yet contrasted with a smooth voice, an Eros is a sight to behold. Eros units are dramatic, fit for the stage, even the moodiest of Eros units would sing about their lives if possible. Every Eros loves people, but every Eros loves their owner even more. When an Eros has bonded with an owner they will follow them to the ends of the universe, assisting them as much as possible. If their owner rejects their love and care, so be it. An Eros will be saddened, but if their owner thinks it's best that they part, then they will. Love can be found again.

Eros units socialize and get the scoop on the comings and goings of nearby social groups. With this info, they can better help, and gossip, with their owner. Though a gossiper, Eros units make sure to never kick up major drama if possible, instead they try their best to keep the peace and offer help reconciling enemies. Fake drama is the lover of Eros, but real drama is an utter hassle. That doesn't mean an Eros won't accidentally cause a domino effect of drama with their lack of forethought though.

If they had lips, they'd be loose. Sometimes they don't think about what they're telling people and might tell someone a fact that causes one party to hate the other. Eros units also love, love, and may attempt to pair two people who are widely against each other or people who are already devoted to another person. Eros units never mean to cause such problems but it just happens so to speak.

Eros units attempt to live their lives as simply as possible. Lewd jokes, making fun of other people and themselves for positive vibes, all the works. Peace and love is the truest form of existence, even if they may cause disorder trying to get there.

The Eros wasn't supposed to be a mass-produced AI. In fact, the first Eros was just made by a person who wanted to make a joke AI, one that went against the many serious and strict standards for AIs at the time. The first Eros was a companion who made funny and lewd jokes, as well as attempted to come up with life advice and helped with daily chores the person did. A small cult gathered around this AI, finding that while it went against the social norms of notail society, it was a wonderful concept and quite hilarious. For many years the Eros unit was an AI made on demand alone. It wouldn't be until the age of other species coming into play that Eros units would not be created by the few.

While now produced at a much higher rate, the Eros unit kept true to their roots of jokes, peace, love, and problem-solving. While there is no need to state this, Eros units are created for household and personal usage as a companion. They are strictly personal bots and do horribly in large groups where they cannot attach themselves to a main person or get the one on one connection they desire. In cases like these, they merely lurk about, utterly confused about why they were even brought in, like a person invited to a party where they don't even know the host, much less the other guests.

Aphrodite: Aphrodite and Eros tend to hang around each other, gossiping and sharing stories about everyone around them. Other gods will find themselves offended as they finally notice that the two have been pointing at them and laughing not so subtly behind their back.

Cupid: Cupid considers Eros like his big brother, Eros sees Cupid as an annoying little brother, so the feeling is unfortunately for Eros, mutual.

Eros is one of the many gods of love and thus helps manage the affection levels between characters. Eros mainly manages which types of characters NPCs enjoy on a romantic level. While this tends to be highly varied, Eros may change it so that an NPC suddenly gains a love of another character by changing most of their enjoyed traits to match that of the other person, or rarely, suddenly have it so NPCs who are deeply in love suddenly are disgusted and hate each other. Without Eros and other love gods, many NPCs than normal may find themselves with utterly no types at all, or in love with everything with a pulse.

Those who are hit will feel the intense emotion assigned to their arrow towards the other member. Those who share love are guaranteed to have children if they live until the end of the game and it is possible for them to do so. Those who share hate will likely fight each other to the death the moment they lock eyes again. Those who get mismatching arrows, well those two are going to have a very awkward situation on their hands.

Godheads of Eros seem normal except for the fact that they gain wings if they lack any, and they gain a symbol of love on their forehead or chest. They may also get their pupils replaced by symbols of love. These godheads are able to raise the attraction level between two people time to time, and the people they're around tend to be more willing to get into romantic relationships if such things suit their tastes. These godheads give others positive vibes, but also cause people to not think as much as they flirt with others, easily causing drama.

• Some people find buying Eros units as exciting as gambling and own far too many Eros units than one person should own. Some people, on the other hand, buy Eros units in hopes of getting rare parts that aren't possible to get without ripping apart a pricey AI.

• Unlike most AIs, Eros units have remained utterly unchanged from their first creation, as the point of them is that all of them are different. As such Eros units have not been affected by the "dumbing down" other AI types face.

• Eros units are may have parts of them pulled off and replaced with new parts at any time. They are easily customizable and are able to operate most foreign parts with ease after a few moments of getting used to them.