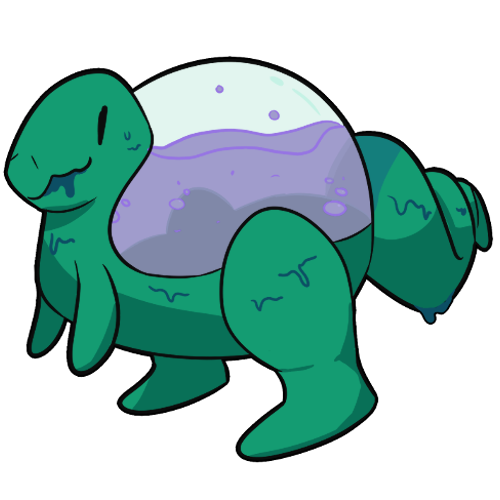 “Best soup I've had in a long time. Will not be returning due to productions methods, however.” — 2 Star Review on a brewdian run restaurant

Attack Method: Attempt to talk down the opposition, or spray their "brew" and run while the enemy is distracted/immobilized/stunned.

Though not particularly religious, brewdians will not hesitate to fall back on their prayers when in need.

Brewidans are large, bipedal creatures possessing strong legs, short hanging arms, and pointed amphibian-esque head. They are easily recognized by the large transparent sack that takes up the majority of their body, containing a fluid that varies wildly from individual to individual. A flap of skin and muscle arches above the sack, while a more substantial underbelly extends from the chest down below the sack, ending in a floppy, though substantial tail at the rear.

The fluid contained within a brewdian's sack is heavily influenced by the environment that the individual is in. The food they ingest, the air they breathe, and even levels of light and heat will alter and change the fluid slowly. Brewdians can choose to either forcefully spit-up or slowly secrete the fluid for various uses. The properties of these fluids vary wildly, and can include toxicity, corrosiveness, nutritional value, taste, color, and luminosity, just to name a few. It is also important to note that while a brewdian may ingest most anything in order to affect their brew, plants and/or fruits are needed to provide life sustaining sustenance. In other words, a brewdian attempting to make brine cannot subsist off salt alone. While a small hole or tear in the liquid sac is repairable, a larger rip or tear can and will cause major trauma unless quickly mended.

Brewdians strive to be, above all else, helpful. They view their very unique ability as a responsibility that they must utilize to help those they consider close. They often aspire to contribute to the wellbeing of their crew or peers in whatever way they can, and these ways are as varied as the fluids they carry. As such they can often be found on crews acting as the either the cook, using their fluid as an additive or the main dish, or as a janitor or handyman, again utilizing their fluid and its unique properties to help. Though generally peaceful, brewdians that find that their role lies in a combat based job can and will weaponize their fluid for pacifying, lethality, or worse. Finding this niche is very important to a brewdian, as they must begin specializing their "brew" as early in their lives as possible in order to use it to it's full potential.

Brewdians are naturally trusting and hospitable, often trying to comfort and aid anyone they deem to be wanting or wandering, which to a brewdian is almost everyone. A brewdian may go out of their way to feed or repair for a stranger, with their payment being the knowledge that they have been useful to their full extent. Brewdians also take great pride in their fluid, seeing as it is often the result of a multi month or year process, wherein they have tweaked and perfected it to be exactly what they need. Failing at something that a brewdian is specialized to be able to do is a worst-case scenario in their minds.

Brewdians naturally learn very acutely how what they do affects their fluid, and as such will try to "brew" it to perfection. This may involve eating certain foods, staying out in the light at certain times, or releasing small batches to test periodically. Though the formula of the fluid can change substantially, the change slows down with age, often leading to brewdians finding one position to stay in for the latter part of their lives and mastering it. Brewdians do not mind taking a more background supporting role, in many cases it is actually preferred, seeing as that will be where they are most useful with their niche skillsets. Thus, they can often be found "behind the scenes" making sure the rest of their crew is healthy, fed, and living cleanly.

Liquid Integration: Brewdians are able to ingest or otherwise intake a variety of materials that will be added to their fluid, affecting its properties in unique ways. Brewdians can harness this ability to specialize their liquid to fit their needs, although significant changes, for example, making a liquid that normally is corrosive and toxic into something capable of healing, can take a significant amount of time, upwards of several days or weeks. If the brewdian is older, 40 years or more, this time extends exponentially. Brewdians can choose to secrete this liquid slowly through the skin, or expel it violently through their mouths for use in combat or otherwise.

• A select few brewdians reject the idea of "filling a niche" and instead elect to be as broad as possible, oftentimes making their fluid mundane in the process, resembling simply water or soap.

• Due to their size, high end restaurants that employ brewdians will often have a special entrance simply for them. Lower end establishments take use of a cargo ramp.

• Brewdians are too "unwieldy" for normal beds, but will often have a blanket that they drape over their back to sleep under. 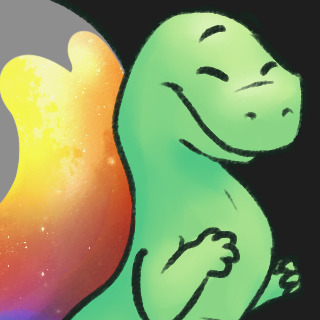 -Back to Species Menu-
< Boog
Budryft >